Offline
I purchased two of the Moss 170-941 red LED bulbs to use as tail-lights/brake-lights to replace the standard 1157 dual filament bulbs on my 100 (I have the reflector pods electrified and wired for turn signals). In addition to the bulbs I also purchased, at Moss's suggestion, two 170-965 Load Resistors.

The instructions for installation of the resistors simply talk about the resistor's being installed between the power and ground leads to each fixture but it does not specify which power lead. My question is: do I connect the ground lead to the tail light power lead or the turn signal power lead or does it matter? I cannot envision connecting it to both as that would defeat their separate function.

Offline
Guessing it would be the brake/turn filament because it's supposed to give the flasher enough resistance to function.
Steve Gerow
Altadena, CA, USA
1959 AH BN6 2-seat roadster / 1974 TR6 Emerald Green
Check out my galleries:
http://www.pbase.com/stevegerow

Offline
If you have an incandescent bulb in the front turn light, wouldn't that give enough resistance in the circuit without adding a resistor?
Steve Gerow
Altadena, CA, USA
1959 AH BN6 2-seat roadster / 1974 TR6 Emerald Green
Check out my galleries:
http://www.pbase.com/stevegerow

Offline
When I ordered the bulbs from Moss I asked the associate if they would work in a 100 as its tail light lenses are much flatter than those for later cars and he assured me that they would. In fact LED bulb is about 5/16" taller than the incandescent bulb and it will not fit under the present lens. My choices are to either find a shorter LED or go to the later rounded glass lens as used in BN/BT cars. I am hoping to go with the first option.

BTW since I have previously transferred my turn signal function to separate electrified reflector pods I now realize that I do not at this time need to install the ballasts since there will be no flasher function for the bulb--merely side and brake function only. But since I will probably next replace the front bulbs and those in the electrified pods with LED's the ballasts will not go to waste.

steveg said:
If you have an incandescent bulb in the front turn light, wouldn't that give enough resistance in the circuit without adding a resistor?
Click to expand...

The recommended, added resistor is required to REDUCE the total resistance in the circuit, by providing an additional, 'parallel' path to ground (IIRC, the total resistance in a parallel circuit is the sum of the inverses of all the resistances; a resistor in series would increase total resistance by its value). LEDs, like most solid state components, have high impedance, meaning they draw relatively little current (compared, for instance, to an incandescent bulb, which produces light by heating a wire; LEDs emit light--hence the name--by using current to excite the the electrons in their atoms to higher energy levels). Since LEDs draw much less current when energized there isn't enough current draw to activate a typical, bi-metal strip-type flasher relay (one side of the bi-metal strip heats up and cools more than the other, causing the strip to move back and forth and open and close a points set, causing the flashing; old school household thermostats operate on the same principle). The additional resistor causes the circuit, when switched on, to draw enough current to activate the flasher.

Edit: I just recalled that the flashers, I think, use a spring-loaded wire that stretches and contracts, not a bi-metal strip. But the result is the same, when a turn signal circuit is activated current flows through the wire, causing it to heat and stretch so the spring can pull the points apart, then it cools, contracts and closes the points again, starting the cycle over).

Edit 2: I believe this is why, in a traditional turn-signal circuit, when one the bulbs has failed open, you have less current draw so the wire doesn't get as hot and blinking is quicker. With LEDs all round, you essential have almost nil current draw, not enough to activate the flasher so the LEDs will light up--voltage is still applied--but there isn't enough current draw to heat the wire in the flasher.
J

Offline
I replaced both rear lights on my BT7 with LEDs. One side blinked normally with no resistor, the other side would not blink. I added a resistor at the terminal of the flasher relay for the appropriate bulb and it works perfectly. There was no need to put it in line, just adding the load did the trick.

Offline
How noticeable is the brightness difference when swapping the filament bulbs to led with directionals... with headlights your going from 2700 Calvin to 5000-6500.
Bulbs in headlights are projected through a clear glass lens, where as the directional lens are not clear, they're either amber, frosted clear or red I believe.
So I guess with directionals we're looking at (pun) increase in nits? From what X to what X?
1964 BJ8 phase II

Offline
Don't have numbers for you, but LEDs are considerably brighter. I got tired of people telling me my brake lights weren't working--in part, I suspect, because I coast in gear to red stoplights--so I put red LEDs in the stoplight circuits in my BJ8 (on driver side, for comparison). Note the lights are red; the distortion is due to saturation:

Edit: And these are just the running lights; the brakes are brighter. 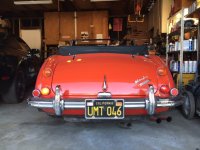 Offline
Bob, nice to see the reflectors are above the bumper, as intended.
Has anyone compared the difference between installing a clear led bulb vs a red led bulb in the red housing?
1964 BJ8 phase II

AUSMHLY said:
Bob, nice to see the reflectors are above the bumper, as intended.
Has anyone compared the difference between installing a clear led bulb vs a red led bulb in the red housing?
Click to expand...

I don't understand the physics, but you're supposed to use the same color bulb as the lens, according to at least one 'authority' (the Litezupp people I bought the LEDs from). Black absorbs all the colors of the spectrum and white reflects all of them, so a red lens would pass more red than other colors, hence more brightness (that's my guess, anyway).

Edit: If there wasn't a difference, no one would bother with the other colors I suspect. Early on, only red LEDs were available, then they figured out to make different colors (yellow, blue, green). I suspect it's due to trace elements in the NP junction that comprises a diode.

Offline
One LED supplier said that if you use a clear bulb behind a red lens, you get "pink". Not the color you want. The rear red lenses absorb anything but red.
John, BN4
OP

Michael Oritt said:
Use a red bulb with a red lens and a clear bulb with a clear lens.
Go here to see it: https://www.autobulbsdirect.co.uk/blog/red-or-white-led-bulb-behind-a-red-lens/
Click to expand...

Michael, thank you for posting this video link. The above is with LEDs. You evidently still use a clear bulb if you're using incandescent.
Steve Gerow
Altadena, CA, USA
1959 AH BN6 2-seat roadster / 1974 TR6 Emerald Green
Check out my galleries:
http://www.pbase.com/stevegerow

Offline
The site is, however, ambivalent--'ambervivalent?'--about amber lenses: white bulb for greater brightness, or amber for truer color?
B

Offline
or how about both from one bulb, .... https://www.bettercarlighting.co.uk/index.php?act=viewProd&productId=654
OP

Bob_Spidell said:
The site is, however, ambivalent--'ambervivalent?'--about amber lenses: white bulb for greater brightness, or amber for truer color?
Click to expand...

Offline
Amber it is (turn signals don't usually need to be seen from 500yds). I left the incandescents in my turn indicators (didn't want to mess with resistors or a SS flasher).
B

Offline
Just a point for the earlier cars, I have seen an LED bulb that flashes red on stop and yellow on turn all through a red lens. Bi coloured bulbs are not new, but there must be a mighty powerful yellow light to get through the red lens. I have not found the source of supply yet but I know that they are expensive. I have been in discussion with Classic Car LEDs over here, and they say that they are looking into it but that is as far as it has gone.

Offline
Bob, See my link above. Better car lighting is selling these and I believe that they are the same ones as being sold by Bill Rawles as part of his conversion kit
Similar threads