Having cleaned out the cooling system over the last few days, the system is still emptying itself and then overheating. By chance, a friend followed me home tonight and said it was leaking water from the front wheelarch, right where the overflow is. It seems to happen at higher revs so I'm guessing the head gasket has gone somewhere and is pressurising the system. There doesn't seem to be any steam from the exhaust, so I'm guessing the leak is only under compression. .

I am up against time. I'm going to Le Mans on Thursday morning early, so I need to diagnose this right first time. Head gasket should be relatively easy to change assuming the pots are above the block line OK, but before I go there, is there anything else anyone knows of that might be causing this?

Offline
Quick check - go to your local auto parts store and grab a combustion gas test kit. Run the car up to temp, and then test the coolant for dissolved combustion gasses. That'll at least give you a quick and dirty look to see if you're going down the right path with a head gasket.
B

Offline
Is your radiator cap spring assembly the long one used in TR3 or the shorter one used in most cars? Short one is exactly like no cap at all. Try the 7 lb instead of the 4 lb.
Bob

Offline
+1 on the cap. If it is a short neck cap the system can never build pressure and will boil early. At least worth ruling out before removing the head...
John

Offline
+1 on the combustion gas check. If you don't want to buy the tool (or your FLAPS doesn't have one on the shelf), any radiator shop can do the test for you. ISTR mine charged me $16, but that was maybe 20 years ago.

What I've found, twice in a row now, on engines with exactly that complaint (compression leaks into coolant, only when under power), is that the tops of the liners were not parallel to the top of the block. The protrusion measured OK on one side (which of course is the side I always checked before figuring it out). But on the other side it was way low (0.000 on the first engine, maybe .002" on my current engine).

For a quick n dirty solution, I tacked a ring of copper wire around each cylinder, kind of like a fire ring (but without a groove for it to sit in). 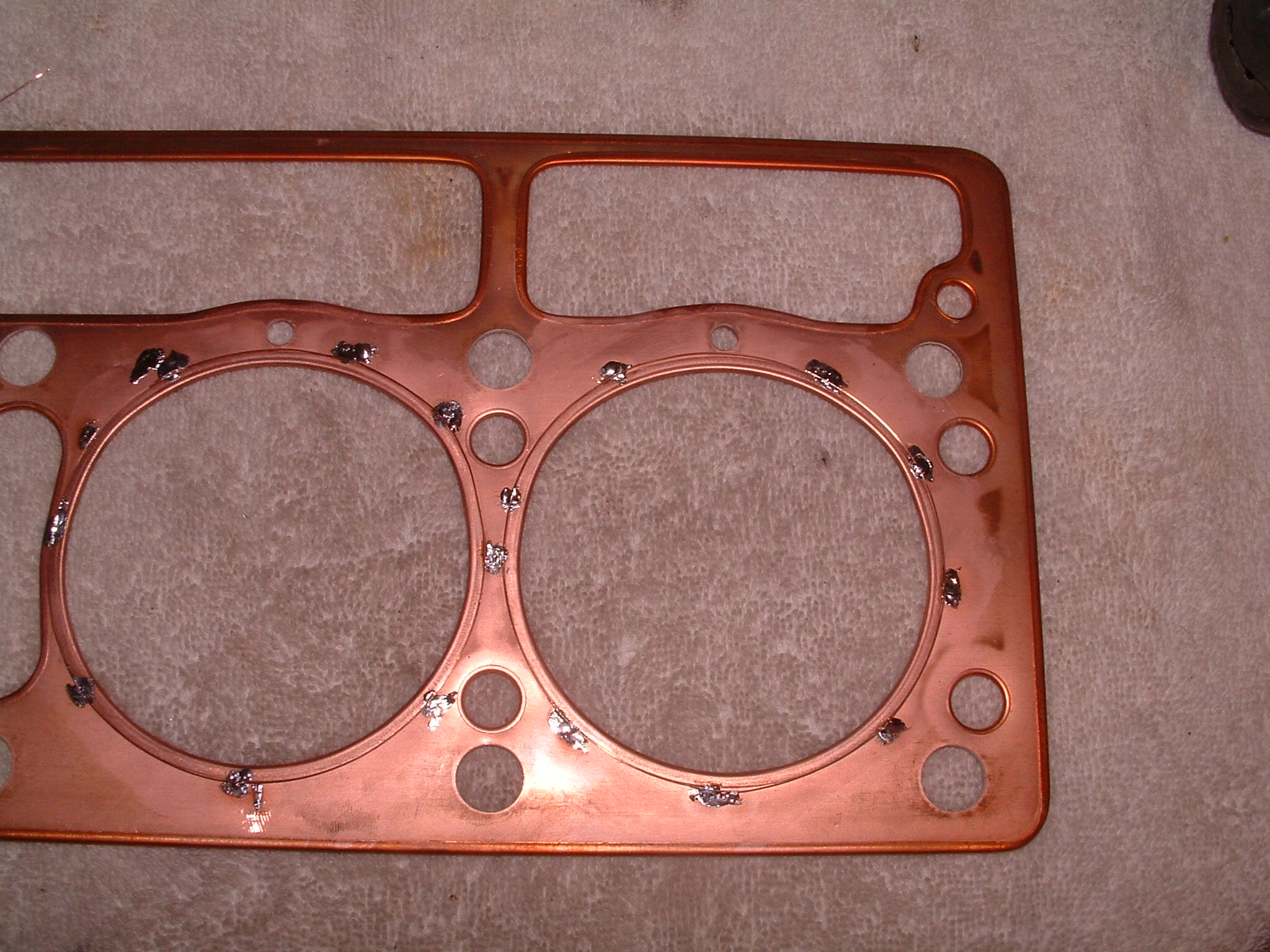 Offline
Latest update. It's beaten me! Took off the head and sure enough, carbon residue running underneath the gasket from the front edge of cylinder 3 to the central waterway. It least I know I found the problem. All of the pots had between 4 and 6 thou lip, so loads of wellseal, new gasket (and water pump, fan belt whilst in there) and build it all up again and then re-tune. Total work was 9 hours and pretty backbreaking as I was against the clock, but it all worked once I'd re-tightened the exhaust manifold nuts.

So, full oil change (along with lots of curse words for the inventor of the purolator) and a final test run. The charge light wouldn't go off, but I assumed it was a wire I'd knocked off and I'd look at it later, got back and left the engine running whilst I looked for any obvious leaks. I then reached around from under the bonnet, turned the engine off and went to my bench to start clearing up the inevitable detritus. I smelt smoke. It was pouring from the regulator box and under the carbs. Quickly disconnected the battery but the damage was done. Wire from generator to centre pin on control box melted both ends (and probably ion the loom as well), burned my hand on the control box cover it was that hot. Looks like the stop lock nut in the control box wasn't tight enough and the connection became permanent, Whilst the engine was running with lights it was drawing from the generator, but when I turned the engine off the battery discharged through the generator.

So I probably have a molten mess of a front loom, the generator has probably been killed along with the control box. Le Mans classic this year will be in the TVR, which is sad as I can't get my son insured to drive it as he is only 21, and he has organised this years trip. I'm pretty disillusioned given the hours I've put in to make this happen so a few days away from the garage is probably a good thing.

Offline
That's sad news to hear. At least you found the culprit on the overheating.
I always find that coming back to a problem after a night's sleep will usually let me sort it out in short order. Working frustrated is something that's sure to make a job take twice as long as it should.
I'm always amazed at how a bolt or fitting or something that I fight from 4:00 to 6:00, until I finally get fed up with it enough to go home for the night, will just fall into place the next morning.
Hope regulator and generator are the same for you.

Offline
The red light means it wasn't drawing from the generator. Center wire is the field connection, so my guess is that you have a shorted field winding. I had the same thing a few years back, but I immediately investigated and burned my thumb on the overheated control box relay. (Which is why there's an alternator on there now.)

Most likely the main harness is OK, IMO. Control box, dynamo and the two wires that run between them are likely all toast, though.
Randall
56 TR3 TS13571L once and future daily driver
71 Stag LE1473L waiting engine rebuild
71-72-73 Stag LE2013LBW waiting OD gearbox rebuild

Offline
Wow, that is a sad development...sorry to hear. If you stay with a generator (as I did), consider going with a solid state, electronic control box. Very pleased with mine. Think it's a good product. https://www.classicregulator.com
'66 TR4A '68 GT6

Offline
Sorry to hear this. Had something similar on mine - the clue for me was that the red ignition light stayed on after the key was switched off. I looked under the bonnet and the little generator was trying with all its might to turn the engine. That couldn't have continued for very long.

Offline
Got to Le Mans, attached a few pics of the cars in the group. The TR3 owner very kindly insured my son on hsi car for the trip, so he was able to get a couple of long driving stints in which made it all OK. Very hot weather so we had several incidents - ended up at French scrapyard next to the circuit looking for a relay.

Also have an old TR3 loom which I can strip for the right coloured wiring if necessary.