TR2/3/3A installing a fuse in the red tail lights

I have a stock metal fuse housing and was going to use it for originality but curious about the metal contacting something. Is that a known problem with these? The fuse is insulated in the housing plus the housing has a little clip to secure it somewhere. Not sure where to install the fuse holder, so if someone has a pic that would great. In addition, what amperage should the fuse be? I also notice the bullet connectors on the new harness are crimped on; plus when I was looking at the new ones I bought, they look like they could or maybe should be crimped too, but I did solder a couple on the sub-harness.

Offline
Adding bullets should be fine. But the sleeve will be just one more thing hanging behind the dash. And there should be 4 wires joined together, which might be too much for one bullet. (2 wires to front lights, 1 to rear lights, plus 1 wire to the dash light switch)

I've never had a problem with the metal housing. It should be clipped to the edge of the dash, pretty much right under the ignition switch. (The corner of that clip used to leave scratches in my driving gloves in the winter, because I had an oversize shift knob.)

The original fuse was 25 amps in the Lucas system, so an AGC 15 would be the normal substitute. That seemed kind of high to me, so I had an AGC 10 in there.

I normally solder the crimp-style bullets, and I've never had a problem with doing it that way. However, I do check that the bullet is a snug fit on the wire. If I can't find one that is a snug fit on the wire I have, I drill out a smaller one to suit.
Randall
56 TR3 TS13571L once and future daily driver
71 Stag LE1473L waiting engine rebuild
71-72-73 Stag LE2013LBW waiting OD gearbox rebuild
OP
S

Offline
Thanks for all information Randall. I am at loss when it comes to that Lucas and the AGC deal; I will have to Google it. I do remember hearing there is something different about the European stuff or their scale on amperage or something.

I am putting the fuse on the tail lights in back and I believe those 2 lights share the one wirer plus there is the license plate on there also and it looks like the 2 red wires in front are independent, so like you said the 3 wires go into S1 on the light switch.

My first tr3 had no fuse on the tail lights and the smoke got out of the tail lights before I got it, and when I got it in 1971 there were no dash lights, but they did fix the tail lights. Now you got me thinking in a 1958 car if the tail lights shorted with no fuse in line and the panel lights were on they would short also, but if turned off they would be protected. The lack of fuses on a tr3 has always puzzled.
steve

Glenn Merrill and one of the other fine folks from ISOA (whose name I forget offhand, sorry!) put on a most convincing demonstration at VTR 2005. Using a short section of original harness wire, they installed a Lucas fuse and loaded it until it blew. Then they installed an AGC fuse (AGC is a common US fuse style, very similar in size and appearance to the original Lucas fuses) with the same rating and the same load. It took a few seconds, but in fairly short order the wire started visibly leaking smoke, and moments later the insulation started falling off!

So the moral is that you should either buy reproduction Lucas fuses (usually available from the usual suspects, Moss, TRF et al); or if you want to buy fuses at FLAPS, use half the rated current. The choice is yours, of course. The AGC fuses are very slightly different physical sizes than the Lucas fuses, but they fit well in all of the fuse holders I have. Seems like someone said they wouldn't fit in his TR8 (but I don't have anything that new).

The later cars with the tail light fuse (like my TS39781LO, which also had a switch rather than rheostat) did have the instrument lights powered through the fuse. I believe this was considered a safety feature, as otherwise there is no visible indication that your tail light fuse has blown. Of course that doesn't help if you have them switched off

My personal take on the fuse situation is that these were inexpensive cars (at the time) and electrical components were expensive. Standard-Triumph was more or less forced to buy electrical components from Lucas, meaning Lucas had little incentive to keep costs down. And part of the Tr3s popularity was that it was cheaper than other sports cars at the time.

But, there is also a safety aspect. Fuses back then were not overly reliable, and sometimes failed for no apparent reason. I had added fuses for the headlights on TS39781LO, and one night while driving down a mountain (rather faster than I should have been driving), the headlights simply went out! Fortunately it was on a relatively straight section of road, and after a momentary panic, I figured out to punch the dimmer switch and finished driving into town with the high beams on. But it could have been much worse! I couldn't find anything wrong, so next morning I changed the fuse and we continued our trip. The bad fuse looked funny, not obviously blown but there was a silver blob visible at one end of the glass tube.

When it happened again a few months later (this time just driving to work on a gloomy day), I finally figured out that the fuse clips had a tiny bit of corrosion on them, not enough to see, but enough to create some small resistance. Over time, the resistance created enough heat to eventually melt the solder in the fuse caps! I polished them up with a bit of Scotch-brite and the problem never happened again.

One of the old manuals discusses this in conjunction with the overdrive, warning that a fuse failure could cause a sudden shift back to direct drive and overspeed the engine. So apparently at least the folks at Laycock didn't trust fuses.

In case you don't have one, here is a factory diagram showing the tail light fuse with the dash switch. This is from "Practical Hints" (which is effectively the owner's manual from Triumph) 4th edition. 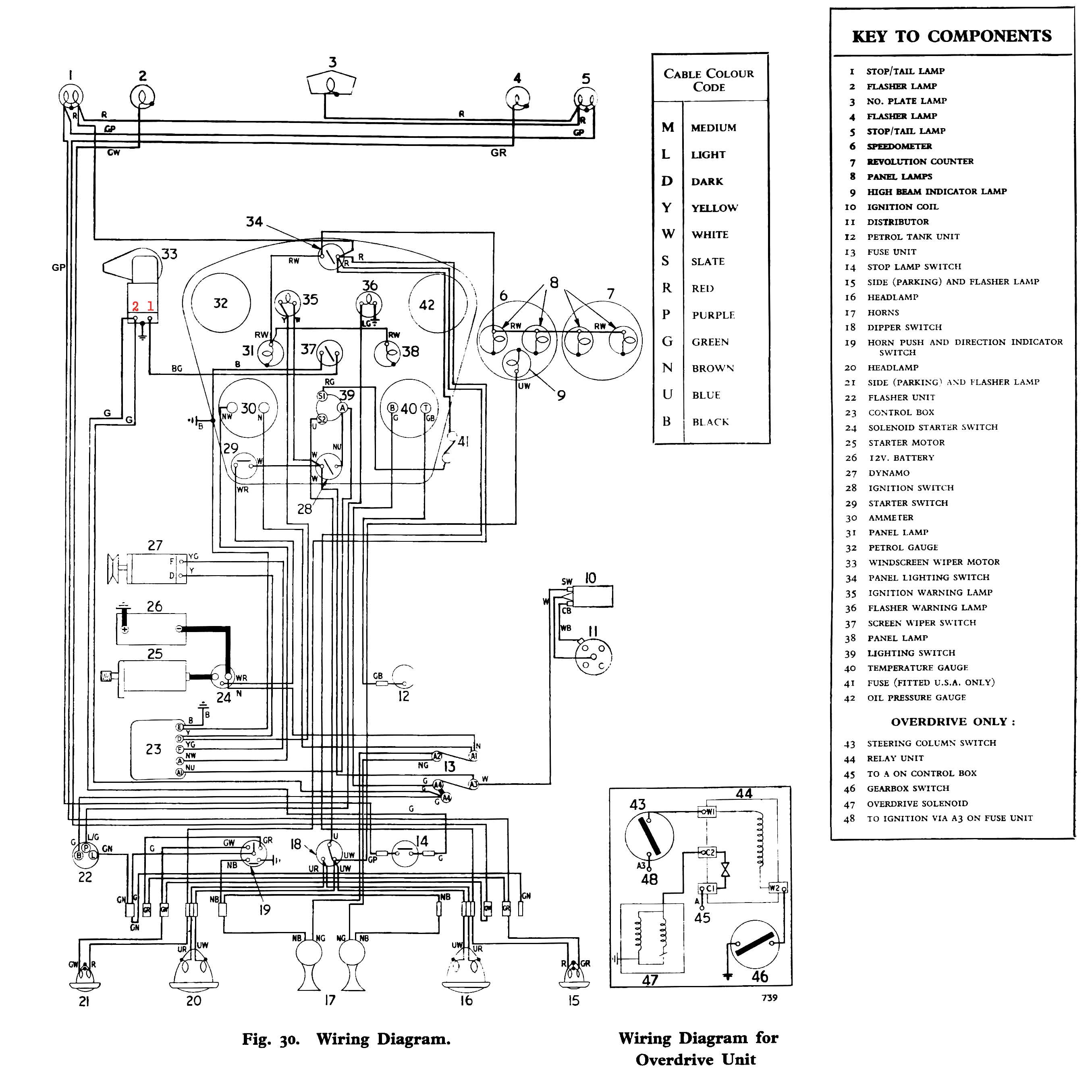