Offline
Hey there! Haven't been on in years, I suppose.

Anyway, can anybody shed light on how to install the points and condenser on my '74 TR6?
I know it is important to have things in order and I think I got 'em out of order:
i.e., points first, I think, ground wire on top.....uhhh, washer to ground or not ground a wire....uhhh
Dang, I just can't really remember. Also, tiny washer that may have been there might be MIA, if there is one, and I think there is...or was..

Now no spark at the distributor. Went from bad to woise...okay, worse. Sorry. Trying to be funny.

Born 2 wrench on her, I suppose.
Any help is appreciated.

Offline
This illustration is in the Haynes manual "Ignition System" chapter. Click image for larger. 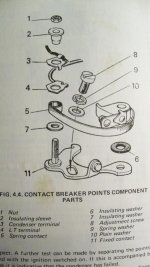 Offline
As Ken's diagram shows, the wires don't go on top. They have to go under the "top hat" bushing, so they touch the point spring but not the center post.

Offline
Thank you, gentlemen. What a pleasure it is to know you are still here. Always helpful.

My guess is I am missing some insulting washers. Seems there are a few and they are important.
Also, poking around I found a blown fuse. That's why power lost to the distributor.

Any thoughts on modifying to some form of electronic ignition and doing away with points, etc?
Dennis

Offline
In Lucas wiring there is not normally a fuse in the ignition system. Did you or a previous owner add one?

There are several choices for aftermarket electronic ignitions. Two of the most popular are the Crane/Allison ignition and Pertronix. You will find people who strongly advocate for each. If you opt for one of these systems the general advice is to carry a set of point and condenser with you so if the electronics fail for any reason you can go back to points to get to your destination.
Doug L.
'64 Morris Mini Cooper-S 1275
'67 Triumph GT6 Mk1

Offline
You'll also find people who feel they cause more problems than they solve. I've tried several of them over the years; had silly problems with all of them. Point & condenser aren't perfect by any means, but at least they don't have transistors that overheat, get flaky, just don't work, refuse to work when the battery is low and so on.

Last one I tried was a Pertronix unit, discovered the hard way that it simply would not work below about 8 volts (just as it says on the box). Problem is, my starter will still turn the engine reasonably briskly with less than 8 volts (under load) from the battery; leading to the situation where the engine absolutely would not fire while cranking. With points, it would still start. (Obviously, the battery was bad, and eventually got replaced. Still ...)

Before that was a Crane, which doesn't like certain styles of ignition rotor. Took me a long time to find that one (probably longer than it should have); I finally wound up cutting apart a distributor cap (which, believe it or not, is what Crane recommends) and driving the distributor on the bench with a drill motor to find out why sometimes it would fire, and sometimes it wouldn't.

MSD 6 (on a non-TR) would wait until about 5 minutes after starting on a chilly morning, then simply die. Always while sitting at a stop light! Anywhere from 30 seconds to 3 minutes later, it would start working again and work fine the rest of the day (never a cough on the way home from work). Finally shipped it back to MSD, they said it could not be repaired.
Randall
56 TR3 TS13571L once and future daily driver
71 Stag LE1473L waiting engine rebuild
71-72-73 Stag LE2013LBW waiting OD gearbox rebuild

Offline
Yeah, that fuse bothers me, too. The coil is not fed voltage by a fused circuit...the distributor using points just creates and breaks the ground for the voltage circuit that feeds the coil.
Ken @
kencorsaw "at" aol.com
DRIVE 'EM IF YOU GOT 'EM

Offline
If you want to dabble in an electronic alternative... I put one of these on my other (6 cyl) British car, similar to Pertronix but less than 40 bucks shipped:

I used it on the spare distributor I carry but installed that unit on the car to prove it before returning it to the boot. That was last July and it has been so unnoticeable that I haven't got around to swapping back to points.

The link is what I bought for my car, you would want to verify it is correct for a TR6 if you choose to order.
OP

Offline
The mentioned fuse is on the driver side fender wall. Can't explain the fact I replace a fuse there and seems power restored to wire from coil to distributor.
So I am heading to the hardware store to try and obtain a missing insulating washer or two and come back to install.

Might mention my car has ballast. Seems about 12 volts into the ballast. Coming out is like 6 or 7, something like that. Kind of low. May be a bit more. I will
check it again. Seems when doing these checks is when the fuse went, I think.
Pulling the wire off the distributor shows strong spark, tough, now.

That said, maybe a ballasted setup would not work with Pertronics or some other electronic option.
Dennis

There are lots of ways to incorrectly wire a ballast ignition system. To support the nominal 1-2 Ohm coil the car's wiring can be equipped with either an external ballast resistor or a "pinkish" ballast resistor wire. Whichever is used, it is connected to coil (+). There will also be a white/yellow wire connected to a 4th (small spade) terminal on the starter solenoid. The other end of that wire connects to coil (+). Different makes may have different wire colors but there will be one remaining wire extending from the coil (-) terminal to the distributor.

6-7V on the distributor side of the ballast resistor would be normal and expected if the points are closed. If on the other hand you measured 6-7V with the points "open", that indicates a short or that you may not have fitted the insulating washers correctly.
Doug L.
'64 Morris Mini Cooper-S 1275
'67 Triumph GT6 Mk1

Offline
Strange, thought I went through that, but my post's not here. Is there a parallel thread on the other forum? Oh well. Anyway, here's the diagram for running a ballast with a Pertronix. 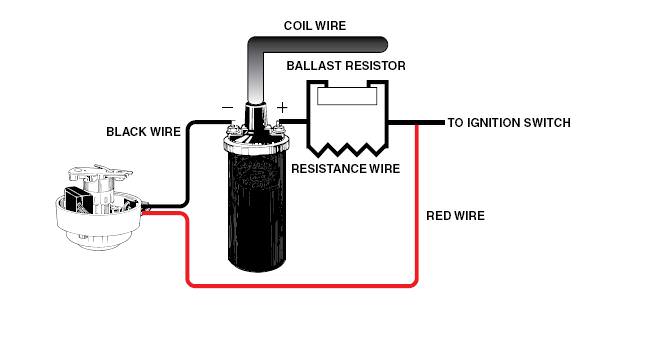 (note that you would use either a discrete ballast or the resistance wire in the harness, not both)

Other ignitions may vary, so be sure to follow the manufacturer's instructions. In general, what I call "points replacement" ignitions just need the ballast in series with the coil, but a full 12v to the module, similar to the Pertronix diagram. But Capacitive Discharge ignitions (like the Crane XR3000) will often require using a ballast-type coil without a ballast (meaning the original ballast wire must be bypassed). They need the low resistance coil for best operation, but the current limiting is built into the module.
Randall
56 TR3 TS13571L once and future daily driver
71 Stag LE1473L waiting engine rebuild
71-72-73 Stag LE2013LBW waiting OD gearbox rebuild
OP

Offline
Okay, some progress, I suppose, but still does not start.
Discovered wire grounding on post. Once corrected, acheived 12 volts on bottom end of ballast post. With the shorted wire,
it was 6+.
Seems to me to indicate points might be installed okay; but, there is no spark at the points while being turned over.
No spark at a plug wire if I pull the wire off the spark plug and gound it near the block.
No spark.

Also, I must say number 1 plug wire was horribly rusted at the plug. Seems weird. Car was parked under cover; all closed up with
a car cover over to boot.
Anyway, I cleaned the connection as best I could and changed all the plugs. Attempting some positive feedback from the car with that
bad wire.
I am sure a funky wire is certainly not good, but I thought I could get a few coughs or rough running, something.
Suggestions? Could a bad condenser cause no spark?
I feel needy, LOL.
Dennis

Offline
12 volts at ignition side of ballast; and 6-plus volts on distributor side.
Also out of town for work. Guess I should order a wire set while away from the car.
Dennis

Offline
With the points closed, you should be seeing less than 1 volt on the distributor side of the coil, and around 6-8 volts on the ignition side. Something's still not right.
Points open should be 12v (or close to it) on both sides.
Randall
56 TR3 TS13571L once and future daily driver
71 Stag LE1473L waiting engine rebuild
71-72-73 Stag LE2013LBW waiting OD gearbox rebuild

Randall said:
You'll also find people who feel they cause more problems than they solve. I've tried several of them over the years; had silly problems with all of them. Point & condenser aren't perfect by any means, but at least they don't have transistors that overheat, get flaky, just don't work, refuse to work when the battery is low and so on.
Click to expand...

What he said! I'm one of those. Once you've sorted out the issue(s) with the points dizzy, keep it. On customers' cars I've replaced plenty of the Crane and/or Pertronix modules where they'd been powered up (ignition on) with the engine not running, too.

Offline
Let's face it, the Kettering system had been used successfully for almost 70 years. Sure, it does take some maintenance, but it is easy maintenance that is quick to do. I've done a lot of engine modifications to my TR3, but replacing the points with something that is supposed to be better, just to save me from a little bit of futzing once in awhile doesn't make any sense. Besides, points are cheap. Just carry a spare $8 set with condenser in the glove box for piece of mind.
Art
'58 TR3A TS236xxL
'92 Mazda Miata -- Supercharged
'07 Mazda RX-8
'11 Mazda CX-7
P

Offline
Tried and removed my Crane electronic system, went back to points and never looked back.

DrEntropy said:
A points system either works or it doesn't. And once you know HOW they work, it's baby-poop to figure out what's wrong. [/COLOR]
Click to expand...

I'll bravely go one step further and say that points will almost always work...to some degree...until they don't. Unless a condensor or rotor or something has failed, even the best quality set of points might wear to the point (sorry!) where they no longer open, but you can usually get just enough of a gap again to get you going. And even the worst burned and pitted set of points can similarly be coaxed into a few more miles if needed, even roadside! (Pull 'em out if necessary, use that little file on your Swiss Army Knife to clean them a bit, then reinstall them.)