Offline
Pulled the trans on the new to me 61 tr3. Going to change the ring gear, its a little chewed up. The outside of the pressure plate is chewed too. The plate extended past the flywheel and the starter is hit and miss. Looks like the starter armature is riding on the ring gear all the time which is not normal to me. Is that normal? Is there a different starter I should be using or should I just get this one fixed? Is there a newer pressure plate I should use, disk looks fine. I dont see a way to post my pics. Starter is long. Thanks for your help. Andy 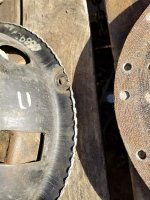 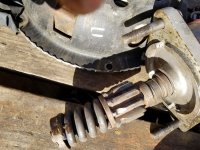 Offline
You may have a mismatched starter and ring gear. Things get changed over the years by prior owners and it's not always correct. Frankly I always have trouble keeping it straight,so verify with the catalog before ordering. I think the early ring gear was shrink on and the later was bolt on. It must be matched with either the bull nose starter(early) or open starter(later post 50,000 vin), as your photo, which is for the later or bolt on ring gear. If not correctly matched it will cause the issue you mention. I bought the modern gear reduction starter and like it very well, but not original if you're a stickler for original. I just bought the basic reproduction clutch parts out of the catalog which are fine for normal driving. From your photos, I don't understand the chewed up edge on the clutch??? So, 1) verify the engine number is close to you VIN, to determine someone has not put an early engine in your car, 2) verify that the ring gear is bolt on which would be the correct part for late engine. 3) decide if you want a newer more efficient starter or get yours rebuilt. 4) decide on OE or heavier duty clutch...then your set. I've got a '61 that had a '58 engine in it. now has a '67 TR4 engine with a '58 application starter and fly wheel. Fly wheel and starter will work on either as long as the two are matched.

ps: I have a later fly wheel with a good ring gear if you need one. It's off the engine I bought to replace the '58 cracked block. I would have used it but already had bought the early starter.
Last edited: Jan 27, 2018
S

Offline
I do not know for sure what is wrong, but something is missed matched. You must have the trans with the longer snot on the bell house to let that starter work, and I think they came into use at TS60Kxxxx somewhere after 1958 or 1959, but you cannot trust the years because they were sold such as by the dealer back in day. You need the TS#. There is a “TSxxxxxx “ # for identification on the body tub and each of the running gear pieces: engine trans, and differential. The engine is by the coil and trans is on the driver side toward the center on a little shelf. Do you have a Moss motors catalog? That will help sort things out. My guess is the flywheel is wrong and maybe too thin in order to let the starter go in so far, but only a guess. Get those TS numbers and report back to the forum and it will help you sort this out.
Peace out
C

awilco said:
Pulled the trans on the new to me 61 tr3. Going to change the ring gear, its a little chewed up. The outside of the pressure plate is chewed too. The plate extended past the flywheel and the starter is hit and miss. Looks like the starter armature is riding on the ring gear all the time which is not normal to me. Is that normal? Is there a different starter I should be using or should I just get this one fixed? Is there a newer pressure plate I should use, disk looks fine. I dont see a way to post my pics. Starter is long. Thanks for your help. Andy

In your second picture you show the "nose piece" of the starter. The gear or splined part of that starter is WRONG. On yours the splines are the full length of that part. That is except for the notch that I suspect has been worn away by it hitting on the clutch cover. That piece with the splines on it should ONLY have raised splines for the last 1/2" ( that is toward the motor). The remainder of that piece has the splines machined down to about 1/16" .
You need to get a new part for the starter or a new starter to start with and then you need to match your starter with the flywheel. The flywheel bolt pattern will dictate which clutch you can then use. As you appear to have the standard starter ( except for the wrong part on that starter) for the 61 TR 3 one can assume that you also have the standard clutch for a 61 TR3. The other alternative for use with that type of starter is the flywheel found on a TR4A. The bolt pattern for that clutch is different than the TR3 and 4.
Have you found the numbers on the transmission? If those numbers start with TS then it is a TR3 tranny and if the numbers start with CT it is a TR4 transmission ( do you have syncromesh between first and second gears) These transmissions are interchangeable between the cars in fact so is a TR6 tranny. This information probably just confuses the issue. Just stick with matching the clutch to the flywheel ( bolt pattern)and the starter to the flywheel (press on ring gear or bolt on ring gear).
Charley
1962 TR4
1963 TR4
1959 TR3A A work in progress.

Offline
Dang, you're right, Charley. I totally missed the teeth being too long.

In the words of Emily Litella : Never mind!

I finally looked at one in the garage and realized what I was missing. (In my defense, it's been a long time since I've worked on that style starter.)

Charley is exactly right, the problem is that there should be no pinion teeth next to the rim of the PP. The teeth fit in the space between the ring gear and the edge of the PP, so they don't actually move past the edge of the PP as I was thinking. Sorry! 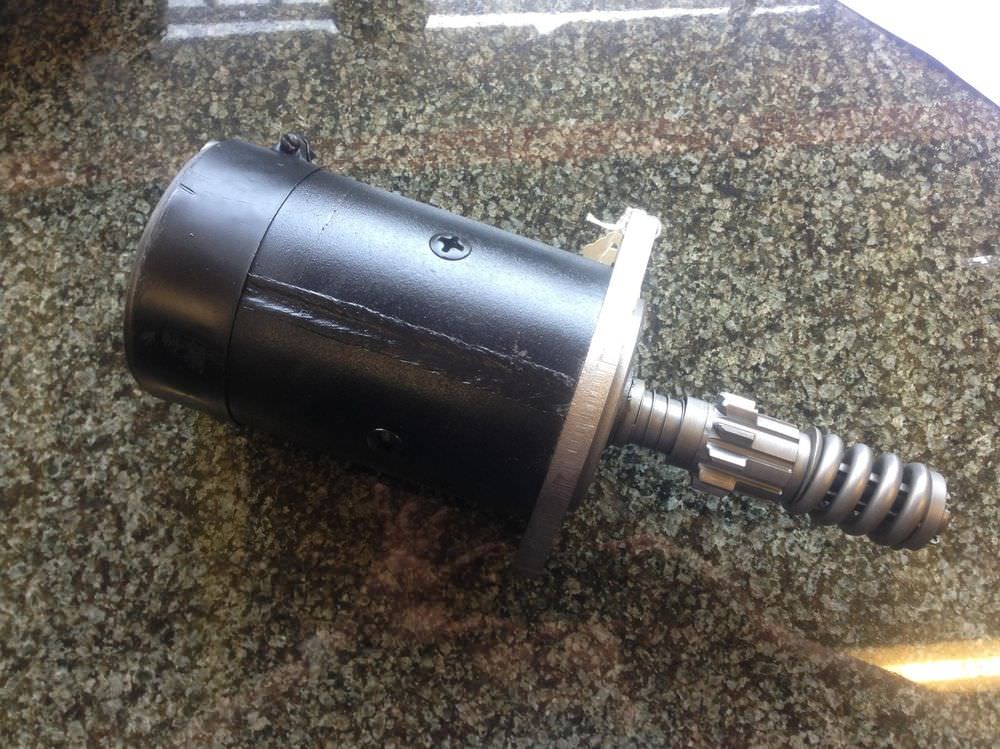 Offline
Wow, thanks for the help guys. The clutch parts look quite new. You guys are right, someone must have changed the starter with the wrong one. I did not condider that. The ring gear had 4 bolts with retainers. Tapped it off with a hammer, was tight, not hard to take off. I do not know the difference between bolt on or press on. If its press on does that mean it doed not have 4 bolts and retainers. Ring gear is only chewed up on the edges, going to change. Kleykamp, If you still want to get rid of the gear please pm. Tr3driver, please pm if you have a spair starter. Guys, are their more pics necessary to steer me in the right direction? Will consult the Moss page also.
Best Andy
D

Offline
Here is a photo of my TR3A flywheel & starter gear. I think I remember when I bought my gear reduction starter they wanted to know how many teeth were on the ring gear. There nay be different tooth counts. 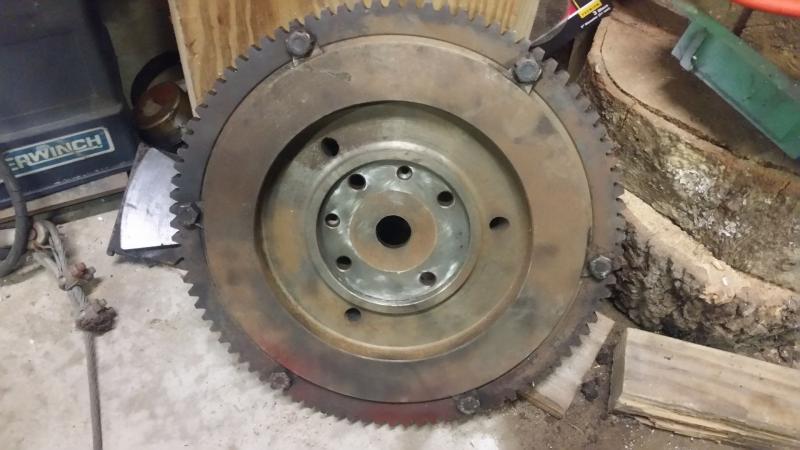 Online
So if your clutch disc and pressure plate look fairly new then all you really need is the correct starter. Having the knurled edge on the pressure plate should not hurt the function of that part. The press on ring gear on the flywheel has NO bolts. So you have the later bolt on type ( like in David's picture) that goes with the starter shown in Randall's picture. No need to throw any more money at the unit if it is not needed. I am sure on these cars you will find another place to spend all that cash.
Look at Davis's picture to be sure that your ring gear is still in good condition. That might be another replaceable item needed if it is chewed up.
Good luck. Isn't this fun!!!!
Charley
1962 TR4
1963 TR4
1959 TR3A A work in progress.
Similar threads