Hello again. I have a 1978 Triumph spitfire.

Offline
going to the forums now.

Boss
Offline
Thank you for that illuminating introduction!

But hey, we're just glad to have you on board after 11 years! Hope you will jump in and be a regular here!

Offline
Sorry, got distracted. I'm having problems starting my spit. It just clicks when I try to start it. Dash lights go out, then nothing. Starter problem,electrical problem? Also the positive cable gets hot.

miamipammy said:
Sorry, got distracted. I'm having problems starting my spit. It just clicks when I try to start it. Dash lights go out, then nothing. Starter problem,electrical problem? Also the positive cable gets hot.
Click to expand...

Offline
What you've described sounds to me like the classic "dirty contacts" problem. Assuming the battery holds a charge (and passes a "load" test), remove, clean and replace connections on all the "big" cables to/from battery, solenoid and starter. Often as not, it'll cure the problem!
-- Andrew (Andy) Mace, VTR's Triumph 10/Herald/Sports 6 vehicle consultant and keeper of the North American Triumph Sports 6 and Herald Database

Andrew Mace said:
What you've described sounds to me like the classic "dirty contacts" problem. Assuming the battery holds a charge (and passes a "load" test), remove, clean and replace connections on all the "big" cables to/from battery, solenoid and starter. Often as not, it'll cure the problem!
Click to expand...

Offline
Remember there is a ground cable from the motor to the frame that needs to be checked as well.

Offline
Ok, thanks for all the replies. It was a stuck solenoid. Hit it with a hammer and it started right up. Now it won't start again. I think its the carb this time. Its getting gas to the filter and to the carb but it just runs for about 3 seconds then dies. What Now?
OP
M

Offline
Ok figured out the carb problem. stuck float, so I rebuilt the carb. Now when I turn the key on I have no dash lights. No oil light no alternator light. I've cleaned all the contacts and checked the oil sending unit wiring. What the heck? Never had this problem before. Help!!! I'm so frustrated with this car! Thank you for any help.

Offline
I'm not familiar with Spitfire wiring, but here's a general checklist for sussing out electrical issues such as this:
It's highly unlikely that you have multiple issues bringing down multiple components.
Start with the battery. Is it charged? Is the alternator charging with the car running? If no, charge battery and address alternator issue.
If both check out:
Look at your wiring diagram and find where the offending components share commonality: A common ground, a common switched power source, a common fuse, etc. Then check at that common point. If a ground, is it clean and tight, no corrosion? If not, clean ground point and connector and reconnect. Apply some dielectric grease to help keep the corrosion at bay.
If a common switched power source, check for power to the switch and then from the switch. If power in but no power out, bad switch.
If a common fuse, check the fuse. Even a fuse that doesn't look blown can have corrosion on the contacts preventing it from flowing current.
That should get you on your way to figuring out where the problem lies, at least.

Offline
Thank you for the suggestions. The battery is charged, but no dash lights-no oil sending light and no alternator light. So I've cleaned those connections up and still no lights. So I'm going to the starter solenoid next then the ignition switch. Oh first i'll check out the fuse that controls all of those lights. I've checked with a test light but not with the volt meter. Don't know what the heck happened. But the positive cable isn't getting hot anymore. Tried wacking the solenoid, didn't do anything this time. I have a ford solenoid, I think I'll throw that on there also.
wish me luck. Tricky little british cars really do try your patience!
P

Offline
Disconnected wire or bad ground somewhere. Look under the dash for anything obvious. 9 out of 10 times its something trivial.
OP
M

Offline
Thanks for all the replies. Very helpful. Well I cleaned up alot of contacts and tried to start car. The red alternator light and the green oil light still didn't come on. I have the cover off of the ignition switch and decided to just push in the switch-electrical side and LIGHTS CAME ON! Started the car but as soon as I let go of the switch it died. So this tells me that the contacts are not staying contacted.
Has anyone ever refurbished an ignition switch? It seems that it- switch is coming apart or not staying together tightly. I really don't want to start tearing it apart without knowing what I'm doing. I could always wrap tape around it but.... I think when my dad couldn't get the key out of it..... Any ideas, suggestions? Those switches with the locks are pretty pricey. If I could just make it stay together tighter it would work. Thanks everyone for your help.

Offline
The electrical part of the switch is a white plastic wafer about 5/16" thick in the end of the metal housing opposite the keyed end. It is held in place by a very small screw. Call The Roadster Factory to be sure and order the correct one for your car. It is a "plug-n-play" easy job to replace it in a matter of a few minutes.
Tom
76 TR6
74 Midget
www.madbrits.org/
www.mg3club.org/
OP
M

Offline
Thank you for the replies. The electrical part of the switch is actually held into the locking part by 2 screws, one on each side. I was wondering how to take it apart and maybe add a little solder to the contacts because its evident its not making contact. I can push it in a little bit and it makes contact and starts, runs, until I let go. Then it just dies. Until I can buy the replacement I need to drive this car so has anyone ever taken the switch totally apart? How do you refurbish these switches? Any help is greatly appreciated! Have a Great Day!

You might be able to remove the switch and bend the three prongs down to keep the plastic contact in full contact with the brass plate. I have taken a few swit 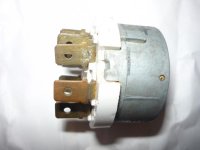 ches apart, recovered the parts that flew out, cleaned the crud, put dielectric grease on the contacts, and carefully reassembled to produce a functioning switch. It took several times to get it right, so note the orientation of the metal body and plastic part if you decide to disassemble.

You may be able to spray some electric cleaner into it and work it through the positions. Keeping the ball and return spring in the right places was tricky. I inserted some picture of th back of a TR6 switch so you can see the three tabs. 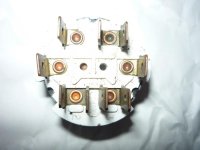 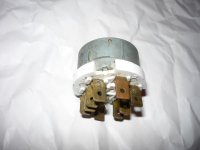