1 How do you tell the left side vertical link from the one on the right side? The two on the project car I am working on are identical including the direction the trunnions threads on.


2 Did all the TR's from the 2 through 6 have the same vertical links, and if not how do you tell the difference? Is there a part number stamped on them that I can use to differentiate them. The Moss part numbers for all these model years are the same, but I have been told that Triumph beefed up these parts from the TR4A onwards. I am trying to find used parts and want to be sure I get the correct item for my 4A


3 Are any of the other front suspension parts left and right sided, or am I safe in just getting the correct link and trunnion and using the other parts I have.

Offline
Are you working on a 3A or 4A?

The vertical links changed when the 4A was introduced, I believe, along with the trunnions. IIRC they also became "handed" (TR2-4 VL were same side to side). The Moss website shows different part numbers for each side on 4A (both different than TR2-4).

Lower A-arms also changed at the same time. Upper A-arms changed sometime earlier, during TR4 run. The A-arms are not "handed" as such, but are different front & rear. Again, the Moss website shows the changes in part number.

Offhand I can't think of anything else in the suspension that is handed. Steering and brakes yes, but not suspension.
Randall
56 TR3 TS13571L once and future daily driver
71 Stag LE1473L waiting engine rebuild
71-72-73 Stag LE2013LBW waiting OD gearbox rebuild

Offline
On my 4A the vertical links and trunnions are handed. I can look tonight and see which one is which handed - attached is a photo of my disassembly; passenger side. If you squint, you can see the thread direction... 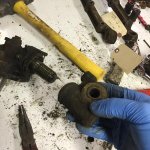