Offline
I ran the engine in my BJ8 last week and all was well. Today, I attempted a start and smoke poured out of the distributor cap. I checked the leads and they are unchanged from last week. I checked inside the cap and the ignition module has had some melting. The engine will not start. I’ve never had one of these fail before - is this how they fail? Before I put a new one in, are there any voltage checks I should perform first? The car is positive ground.

Offline
Speculation on my part but the battery voltage can only be about 13 V to the ignition module unless there is another source somewhere. The voltage regulator should limit the voltage from he generator and it can run higher than 13 V if it is not functioning correctly. However I would start with fixing your solenoid. If it is stuck then as the engine turns over it can turn the starter motor into a generator while it spins. It could be creating more voltage than the module can handle. I am assuming you are using a Pertronix ignitor. If the voltage across the ignitor goes reverse polarity then that can blow the transistor. Not sure how that would happen but fix that solenoid first. There are a lot of transient voltage spikes in these cars during startup. Also check the coil resistance.

Offline
Ditto re the solenoid - fix it first. I troubleshot computers for many years and the rule is there is a single root to every problem. The odds of multiple independent problems occurring at the same time are lotto odds.

Having said that, there may be other child problems (i.e. coil failure) due to the solenoid failure.

PS - I've had a couple of Pertronix failures in my early Healey days due to ham-handed old-school troubleshooting. Bubbling of the label on the module is the indicator - this was told to me by Pertronix tech support.
Last edited: Feb 16, 2019
Steve Gerow
Altadena, CA, USA
1959 AH BN6 2-seat roadster / 1974 TR6 Emerald Green
Check out my galleries:
http://www.pbase.com/stevegerow

Offline
Are you sure the solenoid is stuck closed? I ask because I have never had that problem.

Could it be your ingnition switch has failed and is constantly energizing the solenoid?

red57 said:
Could it be your ingnition switch has failed and is constantly energizing the solenoid?
Click to expand...

That was my thought also.

The common operator induced failure of the Ignitor module is to leave the ignition on with the engine not running. If the power is left on and the module is conducting (equivalent to "points closed") then the module will overheat and fail. If your ignition switch failed and left power on the coil that could easily have burned out the Pertronix.
Doug L.
'64 Morris Mini Cooper-S 1275
'67 Triumph GT6 Mk1

dklawson said:
That was my thought also.

The common operator induced failure of the Ignitor module is to leave the ignition on with the engine not running. If the power is left on and the module is conducting (equivalent to "points closed") then the module will overheat and fail. If your ignition switch failed and left power on the coil that could easily have burned out the Pertronix.
Click to expand...

IIRC, Pertronix tech told me 45 sec was the max you could leave the ignition on without the engine running.
Steve Gerow
Altadena, CA, USA
1959 AH BN6 2-seat roadster / 1974 TR6 Emerald Green
Check out my galleries:
http://www.pbase.com/stevegerow

Offline
Over the years the length of time the Pertronix techs have told customers has ranged from 45 seconds to 5 minutes. All you can really say is that the real time limit is in there somewhere. The other thing you have to keep in mind is that the time limit only applies if/when the magnet ring is in a position that the module is "on" and passing current through the coil. Just like with points, that isn't always going to be true.
Doug L.
'64 Morris Mini Cooper-S 1275
'67 Triumph GT6 Mk1

I would agree with Dave in the need to first check to see if the ignition switch is performing properly. With the switch in place, you can disconnect all vital components before you test to see if voltage is being provided to the starter solenoid and other ignition components, on a continuous basis or only when the stitch is turned to start. This testing should be relatively easy and without much risk at determining the source of your problem. Since, as Dave indicated, power extends from the starter switch to the coil and Pertronix, I would see the starter switch as being a potential center of your problem. However, without checking it out first, replacing your Pertronix and starter solenoid, you run the risk of having to do the same again.

Offline
I fried a starter motor back in the day on a Mini Cooper 1000 when the ignition key somehow stuck in the start position. I can not explain how or why but it never happened again.
It is a good thing the car easily started when parked on a hill as it took a couple of days to get the new starter.
I also had a Pertronix failure that I cannot explain on my 1275 BE. I just parked it one day and I think switched everything off (big red racing kill switch). Couple of days later no spark at all.
Back to points
Joe Schlosser
SCCA National License, Retired
60 Bugeye, since 1966
SCCA FP, sold but not forgotten

Offline
If one is running Pertronix, I like the idea of having a backup points setup with a known good condenser. If I fried a Pertronix on a road trip, would be worried about frying the replacement as well, hence having ability to convert to points.
Steve Gerow
Altadena, CA, USA
1959 AH BN6 2-seat roadster / 1974 TR6 Emerald Green
Check out my galleries:
http://www.pbase.com/stevegerow

Online
I was about to reply to this post saying that while I agreed that a faulty ignition switch would fry the electronic module I did not see how it could affect the starter solenoid as it is energized by a momentary button. Then I remembered that BJ8's have a three-position ignition switch (off-on-start). There is a price to be paid for innovation!
[SIGPIC][/SIGPIC]
Best--Michael Oritt
1954 Austin-Healey 100 Le Mans
1959 Elva MK IV Sports Racer
1961 Ginetta G4
OP
S

Offline
On the day this happened, there was power to the ignition for no more that 60 seconds before I attempted to start the engine from inside the engine bay. Just as I was about to press the solenoid button, I saw smoke coming from under the distributor cap. I immediately shut the ignition key off and the smoke stopped. I then shut the battery off and inspected under the distributor cap to find a melted ignition. I gave it 5 minutes then turned the battery and ignition key back on, on the off chance that the ignition survived. No smoke this time, so I pressed the button on the back of the solenoid for 10 seconds and the engine did not start. However, when I released the button, the starter motor continued to run. I shut the ignition key off and the starter motor continued to run. It only stopped when I killed the battery.

The solenoid stuck in the closed position (starter motor running continuously) when I attempted to start the engine (with the ignition key in the on position) from inside the engine bay, using the button on the back of the starter. The day before I had set the valve clearances by jogging the motor, using that same button many times, and had no issues.

I did some further investigating today:

1) with the battery off, I measured continuity across the solenoid and the solenoid had overnight returned to the open position. This solenoid is original to the car and pressing the button is hit/miss - sometimes it works readily sometimes I have to press off-center. I no longer trust it - it will be replaced.

So, it appears I need to change the solenoid, and then install a new ignition. I think I will also buy a new mechical points and condenser system and try them before I install a new electronic ignition.

Can anyone think of any additional electrical checks that should be performed?

Offline
I agree the switch appears to be working correctly.

Sorry about the Ignitor module. Based on your description it should not have failed. Hopefully you still have a set of points and condenser you can fit and use until (and if) you decide to fit a new electronic ignition.
Doug L.
'64 Morris Mini Cooper-S 1275
'67 Triumph GT6 Mk1
OP
S

Offline
I grew up on points style ignition. This is terribly embarrassing, but can anyone refer me to a good article on how to install and set up a points and condenser ignition?
OP
S

Offline
No, I can’t be absolutely sure it’s original. Two years ago when I rebuilt the engine, I stripped the solenoid back to bare metal and checked it electrically. The rubber button was in the verge of extinction and the whole device seemed quite old. I’d say it was at least 30 years old but I cannot be positive....

SteveHall64Healey said:
I grew up on points style ignition. This is terribly embarrassing, but can anyone refer me to a good article on how to install and set up a points and condenser ignition?
Click to expand... 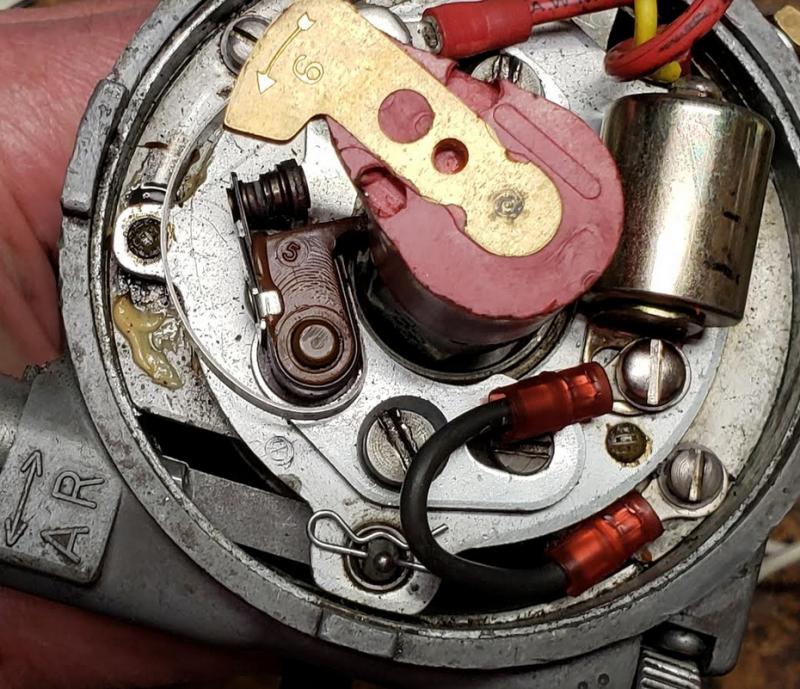 Black ground wire must be the very-fine multi-strand extremely flexible because of breaker-plate rotation - I used a leftover Pertronix ground wire. The best condensers come from the Distributor Doctor in the UK - made to original Lucas specs. This is one of them. The orange-wire condensers sold by others have a lot of problems. The red rotors are best and are widely available.
The high quality points also come from the Distributor Doctor. 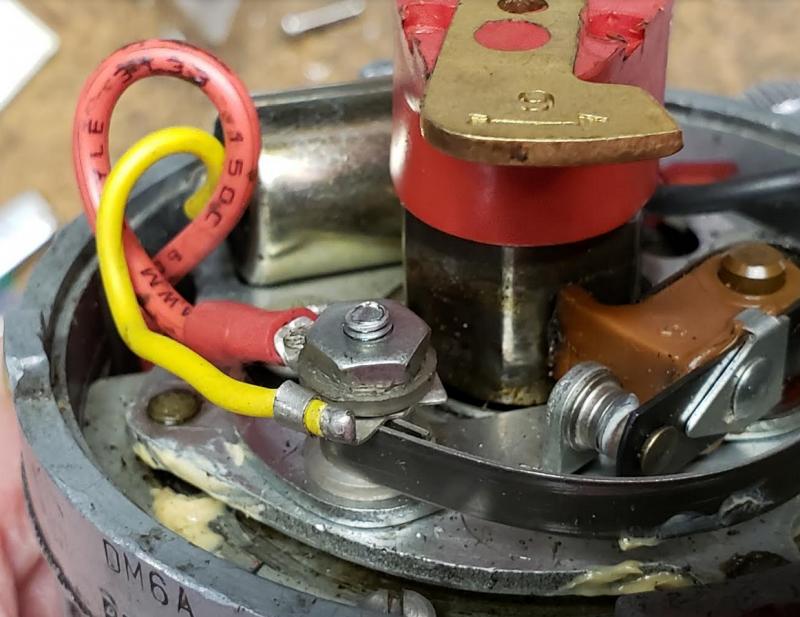 The nylon "hat" washers under the hex nut and under the spring must be arranged such that the condenser and primary wires together in contact with the points spring, but isolated from the post and hex nut. 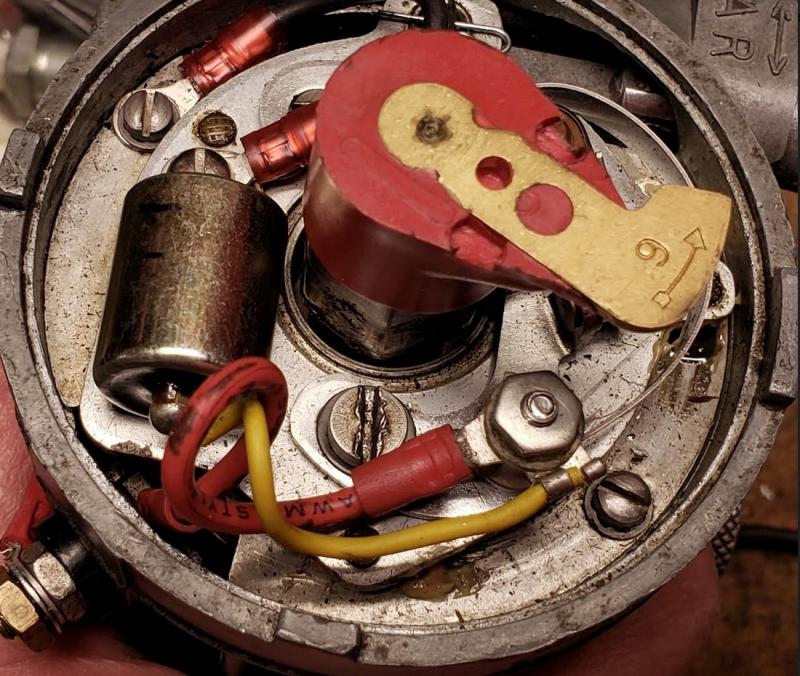 Offline
Steve, this was very helpful. The components are installed and I did verify the the two wires are electrically isolated when the contact points open as you have noted.

is that correct and complete?

If you don't have a Bentley Complete Official Austin-Healey 100-six and 3000 manual, this is a manual-type question.

Offline
Incidentally, 'CB' = 'circuit breaker' (i.e. the points), and 'SW' = 'switch' (i.e. ignition switch/hot lead). If the car's been converted to negative ground, the leads should be switched accordingly (I've heard several explanations, but the most credible, IMO, is that, if connected properly, the primary coil is in series with the secondary and adds a bit more voltage to the spark).