Offline
I noticed my flywheel has two holes for the crankshaft dowel located 90-degrees apart. This means the crankshaft can be installed in two different orientations, which I confirmed. The service manual says to install with the arrow on the flywheel aligned with TDC of #1 and #4. This is simple enough to do, but why even have the other hole? I thought the entire purpose of the dowel is to ensure proper alignment, but the existence of the second hole seems to undermine the reason for its existence.

Also, it appears that there is a round rust spot on the flywheel under where the crankshaft empty dowel hole was located. What's interesting is that orientation would put the arrow on the flywheel not aligned with TDC of #1 and #4. So the question I have is - does flywheel-crankshaft alignment really matter? 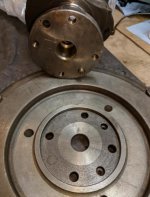 Offline
The extra hole was indeed so the flywheel could be mounted in either of two positions. The rationale was that the engine usually stops in one of two spots 180 degrees apart, so those two spots get extra wear from the starter pinion crashing into the ring gear teeth at the next start. Turning the flywheel 90 degrees gave the ring gear extra life.

In theory, you're supposed to "obliterate" the old mark and make a new TDC mark. (Mentioned on page B11 of the factory workshop manual.) Sounds like someone didn't do that on your engine (probably just didn't pay any attention to the mark at all.)

However, I do believe the dowel is important, even if the arrow position doesn't matter. There is always some clearance around the shanks of the retaining bolts; without the dowel, the flywheel can move back and forth just a little, which will eventually wear things out. The dowel ensures the flywheel cannot fret against the crank flange.
Randall
56 TR3 TS13571L once and future daily driver
71 Stag LE1473L waiting engine rebuild
71-72-73 Stag LE2013LBW waiting OD gearbox rebuild
OP
J

Offline
Thanks for the explanation Randall. So it sounds like orientation is only important as it relates to ring gear wear.

On a related note, will rotating the crank 90 degrees upset a balanced engine? I know that mine was balanced by the following process: 1) balance the crank alone, 2) mount flywheel to crank and balance again taking material off of flywheel, 3) add pressure plate and balance again by adding weight to pressure plate. Flywheel and pressure plate are indexed - flywheel and crank are not. I'm thinking there is no problem rotating 90, because they both should be balanced, but I thought the same would be true for the pressure plate, which happens to be indexed. Any thoughts?

Offline
Do you mean the pressure plate and flywheel were marked? It's been awhile since I've done one (my TR3 has a TR4A clutch in it) but ISTR the PP can be installed either of two ways.

Anyway, it shouldn't matter in terms of balance. The PP can even be replaced with a new one, at least in theory without upsetting the balance. Of course they aren't perfect, but the factory didn't bother with perfect either.
Randall
56 TR3 TS13571L once and future daily driver
71 Stag LE1473L waiting engine rebuild
71-72-73 Stag LE2013LBW waiting OD gearbox rebuild
OP
J

Offline
Yes, PP and flywheel were marked even though they were supposedly balanced in separate stages. Not sure the reasoning, but I will talk with the machinist and find out. He did have to add a little bit of weight to the PP, and mentioned that most of them do not have great balance from the manufacturer - except those used in performance applications.

Offline
If your engine was balanced individually...then you can rotate the flywheel without affecting balance...for the most part. I am sure the balancer still marked the parts for orientation, and rotating one can have a very small affect, but it shouldn’t be to much. Less than a gram or so, which is well within factory balancing.

If you don’t specifically request the balancer to individually balance the parts, they will take the easy way out and just put the entire stack together...crank, flywheel, and clutch....and only spin them once. In that case the stack must be re-balanced if anything in the stack is changed or replaced.
John

Offline
So I spoke with the machinist, and he said pressure plates often end up stamped or machined a little off-center. A change in PP orientation on the flywheel after balancing may shift the center, slightly upsetting the balance. That is the reason for marking both, even though each was independently balanced.
Similar threads