Exhaust Fumes in the Cockpit - BT7

Offline
Hi all,
The other day I drove by BT7 without the tonneau cover (which is unusually for me) and with the two rear seat pans removed (which I've never done before). Driving at 60 mph on a local dual carriage-way the exhaust fumes coming in to the cockpit were extremely strong. Much stronger than when I normally drive the car, when I am always aware of exhaust fumes, but certainly not as strong.

When I got home I could find no leak from the exhaust and I don't think it's coming from the front of the car (I've tried to block any bulkhead holes and filled any gaps in the area around the transmission tunnel).

Posts on this and another forums suggest that it might be related to a some form of boundary layer that creates a back-flow from the rear bumper to the cockpit. Would the absence of the seat pans and tonneau exaggerate this effect, bringing more fumes into the car?

It was also suggested that the rear tail pipes should ideally extend in excess of 1 inch beyond the bumper. Mine (SS) don't appear to extend far enough (photo).

Should I try to buy/make a couple of small extensions to the tail pipes? Would these reduce the fumes in the cockpit once I get the tonneau and pans back in? 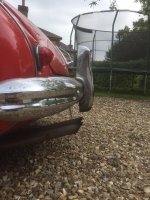 Offline
Phil,
My car used to stink when my engine was tired - IIRC it was worse with the top up and no side curtains. Since the rebuild, not much at all.

Driving with the seat pans out is not normal and may cause a vacuum sucking exhaust forward under the car; suggest re-installing those and taking it for a drive. Leave the tonneau off.

If still unsatisfactory, suggest adding the kind of exhaust tips that clamp on so you can adjust them out only as far as necessary.
Steve Gerow
Altadena, CA, USA
1959 AH BN6 2-seat roadster / 1974 TR6 Emerald Green
Check out my galleries:
http://www.pbase.com/stevegerow

Offline
I agree - put the seat pans back in and try it before doing anything else.
John, BN4

Offline
Kind of a stretch but I got exhaust smell from a blown gasket between the manifold and the down pipes.

Offline
Seems that as air underneath the car is compressed by the car moving forward, any hole over that compressed air would act as a vacuum port - pulling air from under the car up through the hold.

Exhaust-filled air from engine and exhaust pipe area passes under car *until* it gets to the missing floor pan area. Result: exhaust fumes rise up through the hole.

Offline
Hi all,
Thanks for all the replies.
I am sure having the pans out and no tonneau on has made things much worse and when the weather improves (this in England so make take a while) I'll check out how things are with them back on the car. However, I could still smell the exhaust (but not half as strong) with all of these back on the car in the past ,so I'm going to buy some 6" SS extensions (which I will cut down to a reasonable size) and see what difference, if any, they make. If they work I'll have to find a more permanent solution.
In the meantime I'll keep checking for leaks!
Thanks all,
Phil

tahoe healey said:
Kind of a stretch but I got exhaust smell from a blown gasket between the manifold and the down pipes.
Click to expand...

Offline
Hi all
I temporarily fitted the SS extensions. Not a very elegant solution i gant you but should go some way to see if the tail pipe leg nth is part of the problem. I couldn't fine and 36mm ID SS tube this side of the pond hence the exhaust brackets. These are 38mm ID.

Should I cut the ends at the same angle as the originals (first photo). 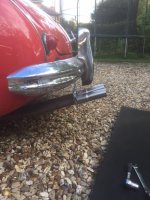 Offline
Hi Steve
I'll let you all know how I get on with the temporary extensions I am trying out.
Phil