Offline
Hi All,
I am starting restoration of my 1955 TR3.
Made on the 20th october 1955 is was dispatch new to Germany with a miles/h tacho.
I bought it here in France where it was imported from the USA.
It has a strange relay/fuse box that I cannot identify and I cannot understand the role of it as it is not standard.
I am attaching picture.
It may link to the very unusual overdrive switch (picture attached too)
I need to understand what is the role of it as I will rewire the car.
Thank you for your help.
Cheers
Raphael

I can't help on your question, and my TR3 was a 1959 model. Do you have any documentation on your overdrive system?

Offline
Interesting. Certainly not stock.
Does the box contain 4 separate relays, or is it a mechanical stepper/timer? I can see 2 plugs on the box, but it looks like something out of an old pinball machine.
Does 2 wires or 4 go into the shift lever? Is the little red button on top of the lever connected to the two wires?

My guess is the box is something other than the OD function. You may have to get an ohm meter and figure out where some of those wires go.

TexasKnucklehead said:
Interesting. Certainly not stock.
Does the box contain 4 separate relays, or is it a mechanical stepper/timer? I can see 2 plugs on the box, but it looks like something out of an old pinball machine.
Does 2 wires or 4 go into the shift lever? Is the little red button on top of the lever connected to the two wires?

My guess is the box is something other than the OD function. You may have to get an ohm meter and figure out where some of those wires go.

Thank you for your answer.
it looks like a relay box. You are probably right and has nothing to do with the OD
The OD has 2 wires (adding a pic too).
So the relay box could it be a timer for the wipers? There is no additional electric equipment on the car (lights, stereo etc..)
Small detail : cannot meter or check as I cut the harness (i know i am a bit stupid here).
Thanks again 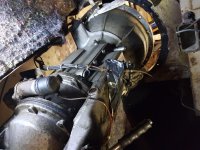 Offline
OK, the solenoid needs one power wire, and a ground but your picture seems to have more heavy wires than needed. Generally small wires (like the ones in that relay box) run from switches or controls to a relay, which handles the higher power requirements of the device (like the OD solenoid). Unless there is some other type of wiper motor installed, I would not expect that relay box to control the wipers. The original wiper motor is ridiculously slow, so to add a control to make it slower, or even delayed, is just crazy talk.

I was asking about the wires in the first picture. It appears there are 2 at the front and 2 at the rear. I assume they go up into the shift lever and to a button on top of it, but have no idea. They may be just two wires that happen to go there on their way to something else. Maybe he added a 4-way flasher? or a 'lock-out' feature for the OD?

Even tho you cut the wires, you can follow their path and see where each end is connected. That might give a clue of the intentions of the inventor.
59 TR3A "Butter"

Offline
So is the plan to keep it stock and reuse the system you have? Some folks reorder the original wiring looms and keep it stock! Other decide to go with a more modern setup that has fuses to update it a bit, such as this link.

Offline
Thank you for the link. I've decided to keep the wiring looms stock but clearly there is advantages to add safety with extra fuses in case of additional electrical components..
Need to re assess

It is a tr3 small mouth crafted on the 20th october 1955. So still a low port but with improved intake

Offline
TexasK may be onto something. Early MGAs used multiple relays to get stop & turn signal functions from the same bulbs. Does your 3 have the single center stop light? Maybe it gets the turn signals to act as stop lights somehow, along with an emergency flasher capability?

Offline
I thought John(CJD) would know what it is because he has a 1955 also, and did a complete restoration with amazing documentation and research; you would do well to check it out. I have heard about people putting the OD switch in the shifter, but never saw it before. I like it-- kinda 007 stuff. Where is Randall when you need him; he must have bought a Jag too. Anyways there just not that much electrical in these cars, most everything is mechanical. Perhaps it is a clever way to shift in and out of gears on the OD. The picture is too small to see well.
Steve

Offline
Well, I have no idea what the white box is. What I can tell is that the original overdrive relay is still attached to the bottom of the battery box, but it is gutted. It's just an empty shell. All the extra wires appear to be related to the overdrive switch being moved to the shifter knob. It appears the PO simply tapped into the overdrive harness in the same location as the original switch, left of the steering column...and then ran the 2 extra wires over to the shifter. Thus the extra wires , which are very neatly bundled. It could have been accomplished with far fewer wires, but not any more neatly?!?

Since the overdrive relay is gutted, I would imagine the white box has something to do with that...but without a closer picture I can't tell what's going on with it??

PS..Randall must have gotten locked of this forum again. He is still active on the "other" one.
John

Offline
Those are old-style relays in the box. They could be for almost anything, but likely for headlights or some other high-current things.

People add all kinds of electrical stuff to these cars. Often, it is just not worth the effort to figure it out. Sooner or later I think you will want to remove it anyway, and either return it to stock form, or install something more sensible.

Here's what my TD looked like when I received it. No way was I going to try to sort out that mess! I just ripped it out and installed my own circuitry, including a box of relays for lights and such. 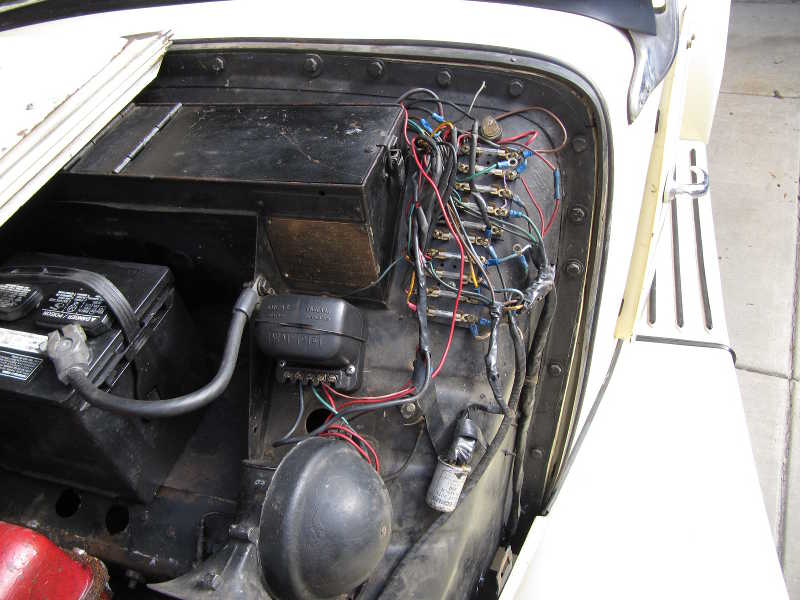