Offline
This question is actually about the Nissan R200 differential I plan to put in my TR250. But it is also a general tech question. I am told, similar to a TR diff, if you want to remove the input flange you need to mark exactly where the nut holding the flange on and replace exactly to that spot, sounds good but I have some questions, which all revolve around best way to do this right. So I can mark the nut and the attaching point to match up later, but 1) does the nut have to start the same place every time when you put it back on, will it also start 180 degrees out for example, the being 180 degrees out when I get to the mark? 2, I see no problem with lining up the marks on reinstall, but how do I know if I am sure I am not one turn too far out or in even though lined up correctly on the nut and differential input shaft. Am I overthinking it? Is there a simple test or method I am missing? Thanks
Last edited: Mar 4, 2020

Offline
The nut only starts in one place, and should become noticeably tighter just before you reach the final position. One full turn out should leave noticeable slack in the bearings (can wiggle the shaft a bit). When the nut is in the right place, the shaft should be tight and present just a bit of resistance to turning with your fingers.

If that doesn't happen, the crush sleeve has been over-compressed (or the bearings are worn) and must be replaced. Don't just turn the nut a little farther.

I don't know about the Nissan diff, but the factory recommendation for every "crush sleeve" diff I've worked on has been to replace the sleeve and go through the crush process (set the preload) every time. Marking the nut is a "shadetree" shortcut.
Randall
56 TR3 TS13571L once and future daily driver
71 Stag LE1473L waiting engine rebuild
71-72-73 Stag LE2013LBW waiting OD gearbox rebuild

Offline
+1...the nut is "single thread", meaning it will line up correctly, so long as you don't install it backwards.
John

Offline
Or cross thread it, thanks--Randall, I kind of thought "you can pretty easily tell when it is snugged up" was the answer, but didn't want to take it apart to find out I was wrong. I don't really know how the thing is put together as far as crush washers and pre-load, but the flange has to come off to get it machined to the TR Driveshaft, and the instructions I have read have simply said the nut should be replaced in the same place it started from. As a semi-skilled amateur I have more faith in my getting the nut back on to where it was before as set by the factory than my starting from scratch and getting the specs right.
Last edited: Mar 4, 2020

Offline
Yep, the pumpkin has to come out if you start from scratch. With a hardened nut and pinion you won’t get far with a crossfeed either!
John

Offline
Got it off, got it machined, got it back on. Nervous because the instructions and my understanding clearly tell me bad to go too far. It got pretty tight, and I stopped at the mark. After a day it was leaking at the flange. I looked at some pictures, the threaded part was clearly out a thread or two more, and on inspection flange was leaking at the threads, not the seal. Anyway, Randall, as usual, was right on the mark. When it was down to the mark on the final turn it would not have moved farther without a breaker bar and serious persuasion.

Offline
I guess I didn't state it very well, I initially thought I had the flange nut tightened down properly, it was actually a couple turns out. I tightened it up and am confident it is right now.

It was leaking when I didn't have it all the way on, it isn't now, I am not sure why, but all good.

It was all just a little harder than I thought because there was a good bit of resistance as I got close, and so when I hat the mark there was the concern, is it on, don't want to turn too far and ruin it. But ultimately when I got to the proper point it was clear, not just resistance, it simply didn't want to turn more without some serious persuasion.

Put another way, wasn't asking another question just thanking for the good advice.

Offline
The flange does not seal tightly to the splines, there is almost always a little bit of clearance at some point. Straight threads are also not liquid tight, the thread spec calls for the points to be truncated at the crest, creating a tiny tunnel that follows the thread even with the nut torqued down. So with the nut not fully tightened, oil can get in between the bearing inner race and the flange, then seep along the splines and along the spiral groove in the threads past the nut.

But once it's properly tightened, the bearing races and spacer seal the flange to the pinion gear, so no oil can get to the splines to seep out.
Randall
56 TR3 TS13571L once and future daily driver
71 Stag LE1473L waiting engine rebuild
71-72-73 Stag LE2013LBW waiting OD gearbox rebuild
OP

Offline
Bingo, sat for a couple days, front end slightly downward, still dry. I got it on today, but discovered some parts were missing from the kit, so unfortunately can't finish this weekend. Hope the bits get dropped in the mail before the world shuts down. 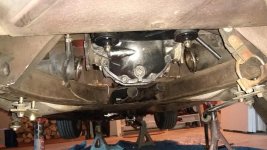 Offline
When installing the pinion with a new crush sleeve it often takes north of 200 ftlbs to crush the sleeve to the proper size. You definitely won't accidentally over tighten the nut on a seal replacement...and you see what I mean about cross threading. You wouldn't even make it out of the barn with a cross threaded nut! Glad all is dry now.
John

Offline
I finally got the adapters after two weeks and a mailing mix up. Bolted everything up (easy) put my custom dual exhaust in (pita) and took her off the jackstands for a run tonight.

My description of the new diff. is like everybody else who describes it. For the first time since I restored the car (and two different stock differentials) no clunk when I start up with gusto, no wheelspin pulling out of a tight corner, and, the final test, I put the top up, all I hear is engine and exhaust, no noisy differential droning away behind me. Amazing.
Similar threads