Offline
Is one vs the other more likely to work if my liner protrusion varies between .002 and .005? Hoping to do this once, without taking the engine apart, and get back to driving the car!

Offline
My understanding is that the solid copper gaskets are hard to keep sealed. Mordy actually sells a special adhesive spray, that they developed to keep them sealed on the racetrack (where it only needs to work for a few hundred miles at most). I've heard that "Yammabond" (from Yamaha motorcycles) works too.

Just for clarity, I used a standard composite gasket for my "trick", and it was standard composite gaskets that weren't staying sealed for me. I've not tried one of the solid copper ones myself. With the trick applied, I've even reused the gasket and no leaks.
Randall
56 TR3 TS13571L once and future daily driver
71 Stag LE1473L waiting engine rebuild
71-72-73 Stag LE2013LBW waiting OD gearbox rebuild
OP
T

Offline
Ah, OK, best of both then.

Randall, is the spacing of the cooper wire from the opening critical? Height of tack weld critical?

Yes, only want to do this one last time but also documenting for the forum and future users.

Offline
I'm not sure how critical the spacing is. Obviously it has to be on top of the liner; and I chose to put it in the slight depression just outside of where the copper sheet from the other side is folded over. But I wasn't particularly careful about making sure it was right against the edge of the sheet. Here's a closeup 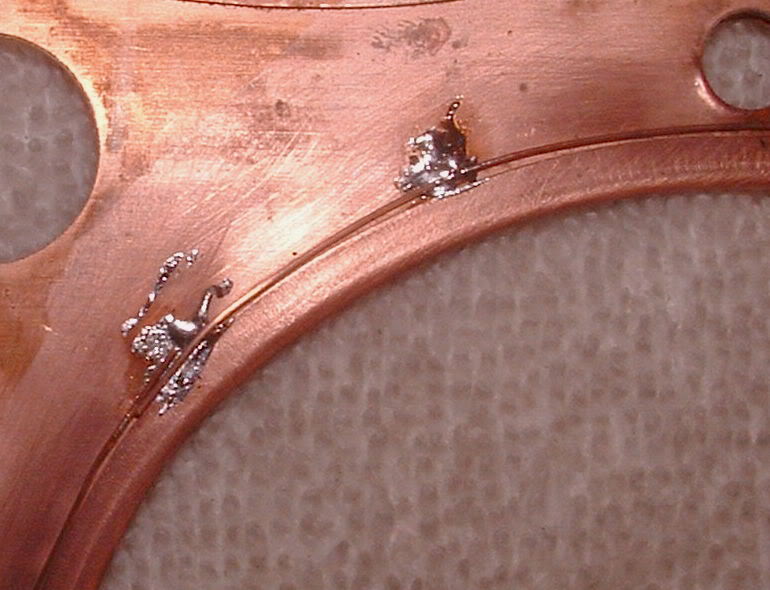 The "tack weld" is just soft solder. (Kester 63/37 eutectic rosin core, just because that's what I had on hand.) My assumption is that it will deform and flow under the clamping force from the head, so I didn't worry about particularly making it even. In fact you can see in the photo, it was a fairly lousy soldering job. The idea was just to ensure the wire staying in place while the head was installed. (I did go back after the photo was taken to cover up the ends, just wanted to show how they were overlapped slightly.)

FWIW, Ken Gillanders (BFE) suggested using super glue instead of solder. Makes sense to me, but I stuck with solder since it worked so well for me before.

Offline
Hi - hope you had a good weekend.

Here is the "best" gasket Moss sells, I can't see where I would tack the wire?

Offline
Sorry, I can't help you there. That isn't a standard gasket, doesn't appear to have any copper at all. Most likely solder won't even stick to the "fire ring" portion around each cylinder (looks like aluminum to me). But since the ring appears to be pretty thin and located well out on the liner, it may seal OK without the "trick".
Randall
56 TR3 TS13571L once and future daily driver
71 Stag LE1473L waiting engine rebuild
71-72-73 Stag LE2013LBW waiting OD gearbox rebuild
OP
T

Offline
Well at least I recognized that the gasket was a totally different composition!
Similar threads