Offline
I knew it was ominous when my '60 BN7 ran faultlessly for several months. Then, while driving around the community with a friend, my clutch ceased taking a bite on the flywheel and we coasted down the street to a friend's house. After some car jabber, I tried the clutch again and it was engaging. My friends followed me home without incident and I had no more clutch issues for several hundred miles. This car was restored circa 2000 or so in North Carolina and had a Smitty Toyota conversion installed. I had put a rebuild kit in the clutch master three years ago and bled the clutch slave at that time as well. I know I should have installed an inexpensive new master cylinder, period. Last week I was cruising, accelerated from a traffic signal and lost the clutch, i.e., accelerating the engine produced no forward motion. I don't remember how the clutch pedal felt at the time, but I got the car off the road, checked the reservoir (full) and called AAA. With the car safely in the garage, I found the clutch pedal would compress only a little bit with heavy foot pressure. That had not occurred on the earlier clutch disappearance. I don't think there is anything wrong with the clutch. With the exceptions noted here, it has been good and is almost surely has few miles on it. Since the clutch is not engaging, being somehow held out of engagement, I think either the master cylinder is seized or ditto the clutch slave. My first impulse is to pull the clutch master cylinder, check its function, and install a new one regardless of its condition because it has been rebuilt once. Hoping that is the problem. Less appealing is tearing into the car (passenger seat out, tranny cover ditto, etc.) to reach, check and possibly replace the slave cylinder. Other than bleeding it once, I haven't had any issue with it. My conjecture is that the hydraulic system is locked, either the master or slave cylinder, holding the clutch out of engagement. I don't have a lift and would prefer not to have to put the car on jack stands to try to examine the slave and the position of the clutch fork hoping that the more easily addressed master cylinder is the culprit. Opinions?
Owner of a 1960 BN7 with Toyota 5 speed and a '92 Porsche 968 coupe. Former owner '62 Jaguar MK2, MG-TF brought back from military service in Italy 1958, '61 Healey BT7, pre-A Porsche 356, and a Porsche 944.

Offline
If you decide to purchase new master or slave cylinders, I highly recommend: https://www.pegasusautoracing.com/ They sell genuine Girling parts to racers who won't be satisfied with junk. Great customer service and fast shipping. You will have to use the pushrod from your present master cylinder but it's easy enough to change out, being held in only by a circlip.
Rick
"Madman in a death machine" My Nasty Boy Build: > BritishV8 Forum: "The Exploder" - HealeyRick's Austin-Healey BJ7 w/ Ford 5.0 <

Offline
If your theory is correct, then loosening the metal line that leads down to the slave should release the locked pressure and allow the pressure plate to clamp back down on the clutch disc.

Offline
IMO the slave cyl is more likely culprit than master cyl. Moisture can get in under the boot, causing corrosion which can cause the piston to hang up. I had this happen.

Would pull the seats and tunnel and check the operation of the slave cylinder.

I replaced mine 2 years ago at my engine rebuild with the Moss Classic Gold. It was apparent high quality and quite inexpensive. In fact a new (Moss)master, slave and braided SS hose are all pretty inexpensive. I wouldn't buy the master, though, until you'd dealt with the lower-end components.

Although I can see that the hydrolic components could be the cause of this issue, I also see the possibility of other component causes as well. What would happen if the pressure plate were to fail, cause the release bearing out of alignment? Also (as I have experienced) what if oil from transmission or engine was to leak onto the pressure-plate or clutch? These are conditions that have happened and resulted in similar symptoms.

As I have aged and without a lift, I also find getting under the car to be a pain (literally and figuratively). However, I believe more information is needed to Identify or verify the true cause of the issue.

Offline
I will begin disassembly of the cockpit interior, seats, carpets, and then the tranny cover today to expose the slave cylinder to see if releasing hydraulic pressure at that point causes the clutch fork to return the clutch to engagement. If that is the case, I'll be removing and replacing the slave, the soft hose and adding the bleeder suggested by Steve if that prove to be the problem. I'll get the bleeder in any case. If the slave isn't the cause, I'll move on to the master cylinder. I don't suspect the clutch itself, though that might be driven by wishfulness. Other than the two events mentioned in my original post, there has never been any sign of slippage with the clutch, and my engine rebuilt for the previous owners is very strong. Appreciate the input from Forum members, particularly from the unposted contribution from Bill Young of the St. Johns AH Club here in Florida, where I am a member. He is bringing a bit of Healey fame to our club as a contributor to The Marque.
Owner of a 1960 BN7 with Toyota 5 speed and a '92 Porsche 968 coupe. Former owner '62 Jaguar MK2, MG-TF brought back from military service in Italy 1958, '61 Healey BT7, pre-A Porsche 356, and a Porsche 944.
OP
R

Offline
Further to Steve's post re Ophartz offering of clutch slave bleeders, I just checked and found that they are sold out. I was intending to make that purchase, as well as the soft line for that cyinder. Is there another source?
Owner of a 1960 BN7 with Toyota 5 speed and a '92 Porsche 968 coupe. Former owner '62 Jaguar MK2, MG-TF brought back from military service in Italy 1958, '61 Healey BT7, pre-A Porsche 356, and a Porsche 944.

Offline
Speedway Motors and Summit Racing have them. Search "clutch remote bleeder". You want 3AN threads (3/8-24).

Denis Welch sells them. They don't use a bracket either - this looks like a good way to capture the hose: 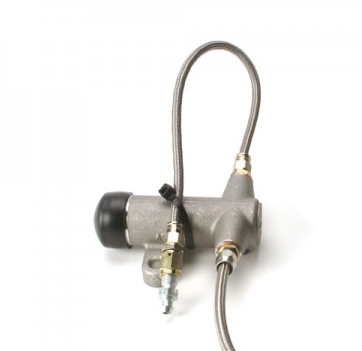 Offline
Rather than removing and checking my car's master cylinder, I took the suggestions from Forum contributors and pulled the transmission cover, etc., to expose the slave cylinder. This was a real chore on my car, as it is super insulated (I'm in Florida). I found the clutch slave rod pushing back the clutch lever, the predicted reason why I had no clutch. And as suggested, backing off the hose connection allowed the slave to release and the clutch lever to return to its forward position. The clutch pedal, stuck in the up position, then could be depressed. Upon the slave's removal, I found a fair accumulation of material in the cylinder bore. With some coaxing and air pressure, I was able to get the piston and the innards out. This was made more difficult by the presence of some corrosion in the bore at the open end of the cylinder. The rubber cap that was supposed to prevent egress of foreign material was a very loose fit. So, what I think happened was a gradually situation where the piston was beginning to hang up when the clutch master cylinder hydraulic pressure forced it out and into contact with the fouled surface. This is probably why I had the earlier experience with the clutch going away, and it is surely why the slave finally locked up. As mentioned, I have the slave out and have ordered a new slave, the connecting hose, and a Quarter Master 710105 -3AN remote bleeder from Summing Racing. A Forum stalwart advises that I now need to identify the proper fitment to complete the remote bleeder. Thanks to all for your help. I will report any further developments.
Owner of a 1960 BN7 with Toyota 5 speed and a '92 Porsche 968 coupe. Former owner '62 Jaguar MK2, MG-TF brought back from military service in Italy 1958, '61 Healey BT7, pre-A Porsche 356, and a Porsche 944.
J

While I have not had a clutch slave cylinder failure to date, I have installed a remote bleeder line which allows for convenient refresh of hydraulic fluid.

On my BJ8, I chose to make a bracket with clamp as follows: 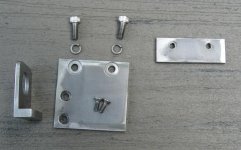 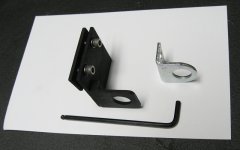 The bright-metal bracket on the right side of the right-side image came with the kit. I used it as a guide in designing a replacement bracket.

If you don't have access to a milling machine, you can probably bend and drill a bracket from light gauge steel.

Here is how it is clamped in the car, no drilling in the vehicle necessary: 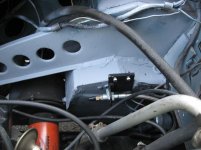 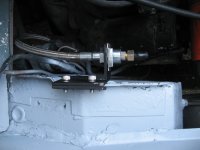