Online
I am beginning the "wake-up" process on a TR6 that sat in a garage for many years. I drained about 3 gal. of old stinky gas. I'll be removing the tank to clean out the varnish/sludge that is in the tank. What do you guys recommend to clean out the sludge?
Will hot water and detergent be good enough or do I have to use something stronger?
By the way, I don't believe that I'm dealing with rust, just the very old gas.
Your thoughts?

Offline
I use a 6 ft piece of chain. Drop inside and swirl around with kerosene.

Offline
We used several gallons of vinegar. Filled the tank and left it on in the position it is in while in the car and then rotated the tank so the vinegar spent time on all sides of the tank.The process took several days. I tried the chain thing but I think there are baffles in the tank that prevented the chain from getting to all parts of the tanl.

Offline
I think there are baffles in there, you can try soaking in cleaner and then just keep your fuel filters fresh. How many years has she sat?
T

Offline
You can also dump in your can of old large bolts/nuts/washers and slosh them around. It is very noisy. The baffles make getting them all out more of a challenge.
I used muriatic acid as part of the cleaning process before applying Eastwoods rust treatment. The inside of the tank looked new afterwards, but the whole process is time consuming. The tank I started with was obviously rusty inside. So far, no leaks, no rust.
59 TR3A "Butter"
OP

Online
UPDATE....
A few days ago I partially filled the tank with mineral spirits thinking it would dissolve any crud in the tank. I rotated the tank every few hours, then drained the tank. When I looked inside, I saw that the mineral spirits had not done much at all, so I decided to go to plan B.
Since there was some rust (initially I didn't think there was any rust) I decided to try cleaning it via electrolysis. I filled the tank with a mixture of distilled water and Arm & Hammer Washing Soda. Then I took an old tire iron and used it as a sacrificial annode by taking a plastic spray can top and put the tire iron through it. The cap keeps the tire iron centered in the opening where the fuel gauge goes. It's important that the anode does not make contact with any part of the tank.
I hooked up my battery charger..... negative to the tank, and positive to the anode.
Every few hours I remove the anode and clean all the rust that the anode attracts. It appears to be working well, but will know more in a day or so; I intend to let it "cook" for another day.
It's environmentally friendly and the only cost was the Washing Soda (it makes a good electrolyte to conduct the current). 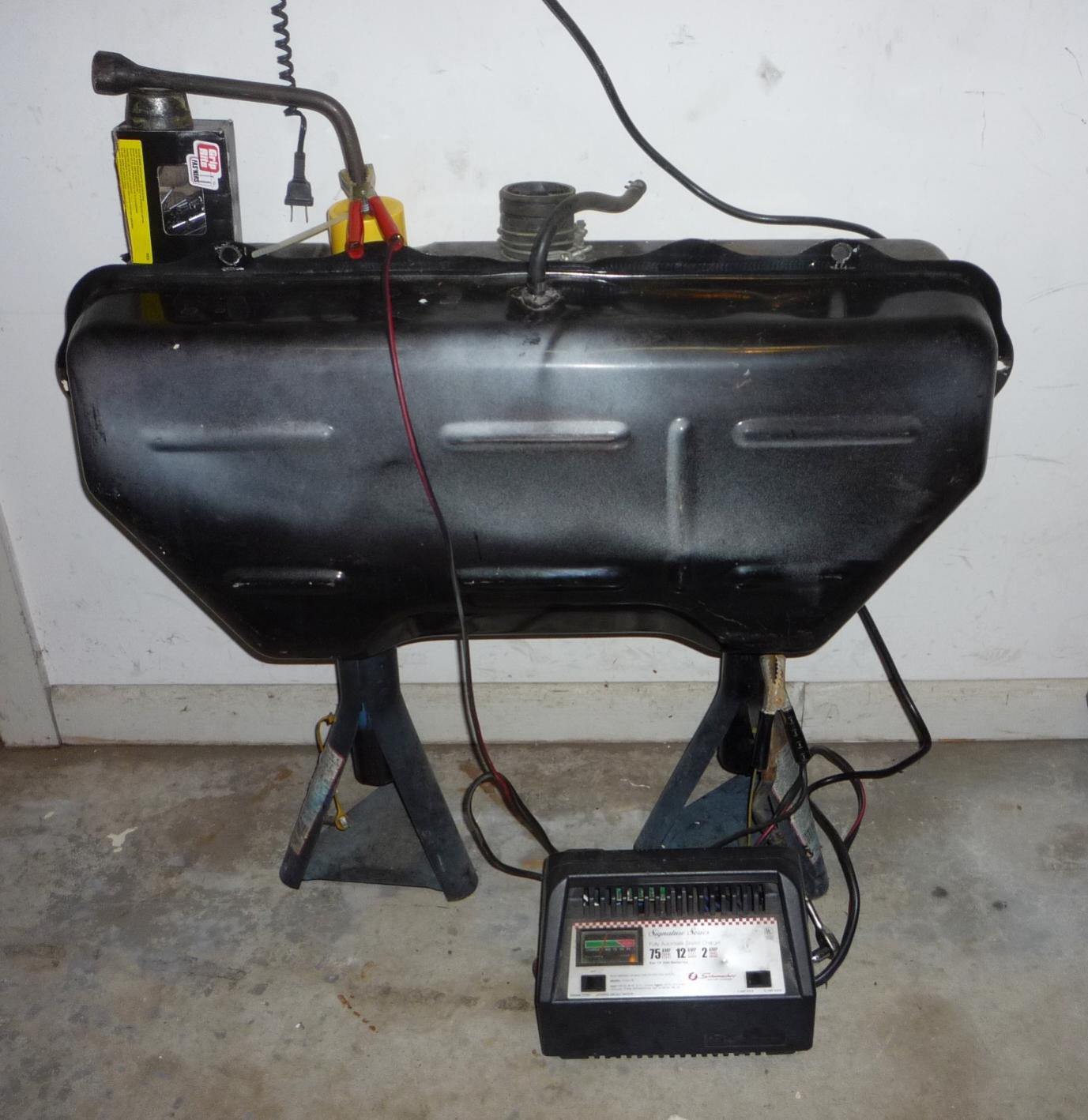 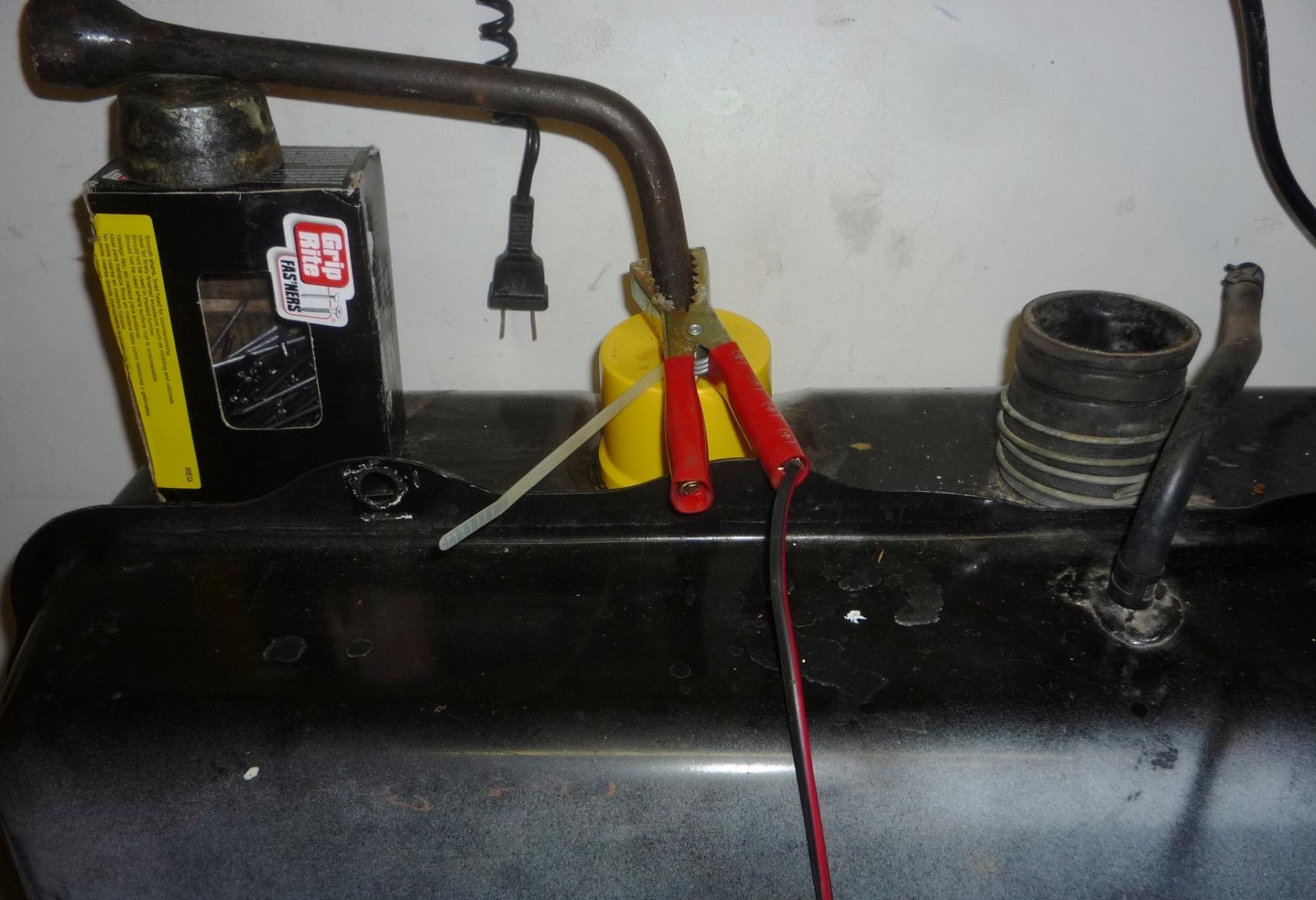 Online
Here's a pic of the anode after only 2 hrs. in the electrolyte solution. It was smooth and clean before inserting. As you can see, the rust is being removed from the tank and adhering to the anode. 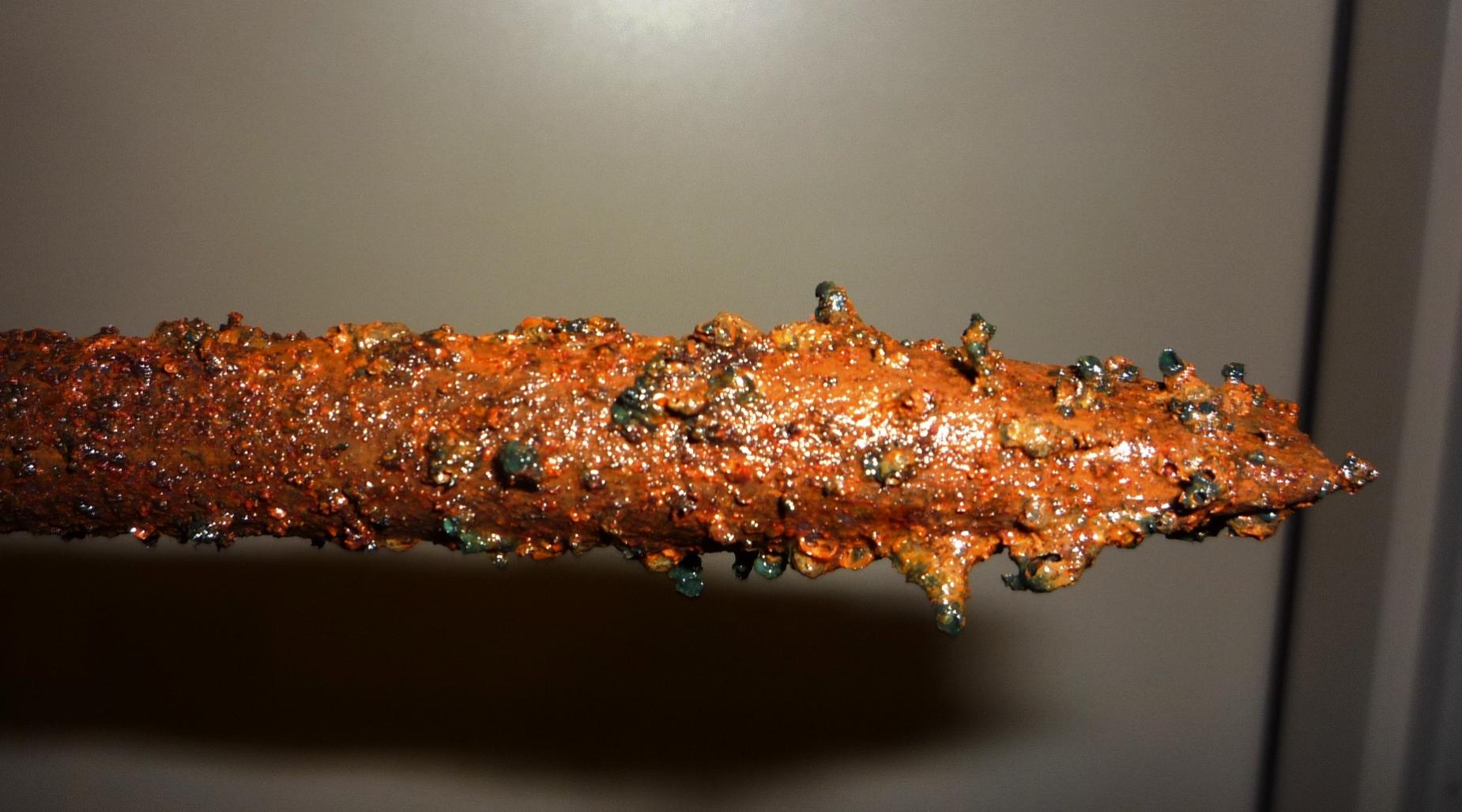