Offline
i seem to have an issue when putting on my top or tonneau with marking up the cockpit trim and the paint between the rail and the snaps. especially the first time when i have to pull hard on the vinyl.

My trim rail is painted. i had such deep scratches that i went with filling and sanding, then painting. So anything sliding over them seems to leave a mark.

i also worried that putting on my side curtains will cause some scratches. even just jiggling around while driving will leave a mark. i rarely use them so the last thing i wanted was to look at scratches the rest of the time.

So today i started a project i hope will help with that and hopefully can help anyone else with the same issue.

First i went to a local Hobby Lobby and bought some clear vinyl. 3 running feet of it cost me about 5 bucks. it comes 54" wide. i got the medium weight one. i was afraid the thickest one would be too thick and the thinnest might tear too easily. after doing the first part of this project, i wonder that the thinner might work just as well.

first i put some pieces of tape at the edge of the top while it was on the car. i marked at each snap location. then i took the top off. i touched up the scratches, just a couple of little ones, and let it sit overnight. Next i measured from the snap to the tape and from the snap over the top of the trim rail. i came up with a width of cover i wanted to make at 2-1/2" wide. then i laid some paper over the rail and taped it. took my finger nail and made a mark on the paper tracing around the rail. then came back and marked with a Sharpie. Note i only did a little over halfway around the back. this is what it looked like: 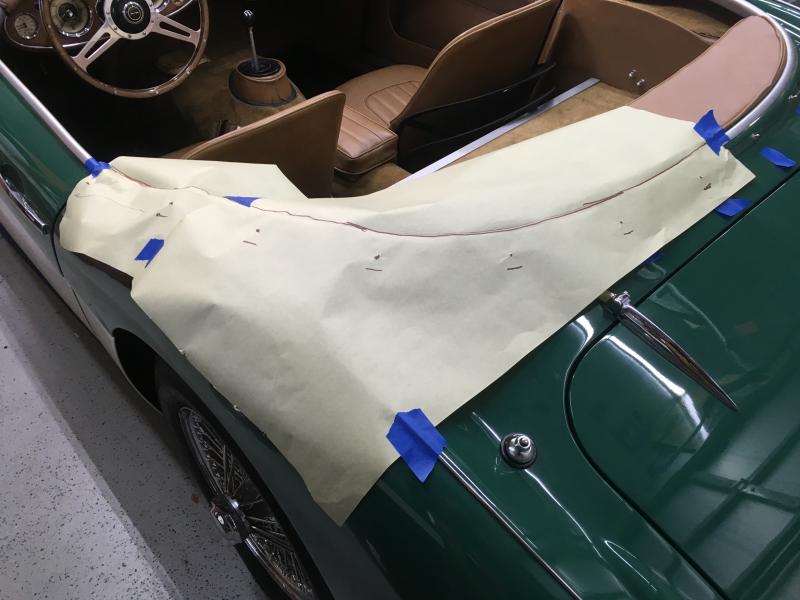 Next i took a 2x3 and made an outer mark to cut the paper sheet by. 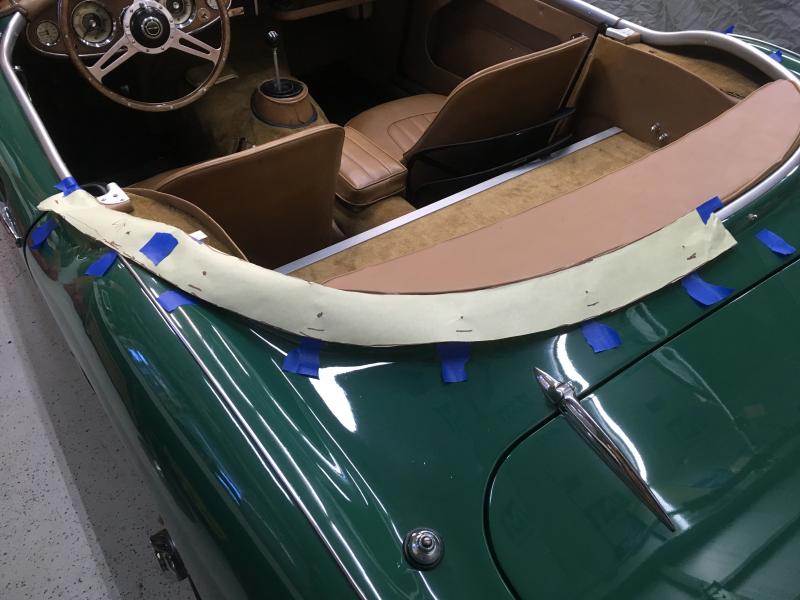 Once i trimmed it up some, i moved it over to the plastic sheeting. Traced it on there and trimmed the plastic inside my marks. 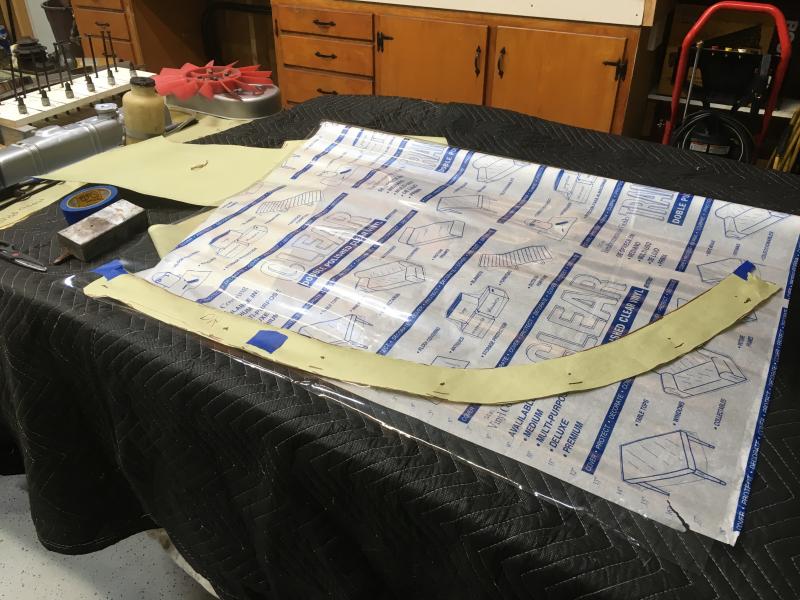 Then i moved the plastic to the car. taped it roughly in place. Next i took a single hole punch and punched holes in the plastic at the snaps. i found it best to start in the middle and work both ways. pulling on the plastic a little to keep it slightly stretched. then i took a heat gun and put to the plastic to get it to lay over the top rail and in the valley. then i took my pattern and flipped it over and cut a piece for the other side. punched holes, heated, etc.
then did some more trimming and put the top back on. Now i have a plastic buffer between the paint and the top. being so clear it is hard to see. after putting the top back on i have a little more trimming i want to do so it does not show on the outside. i tried to make sure the outer edge is just at the edge of the top. 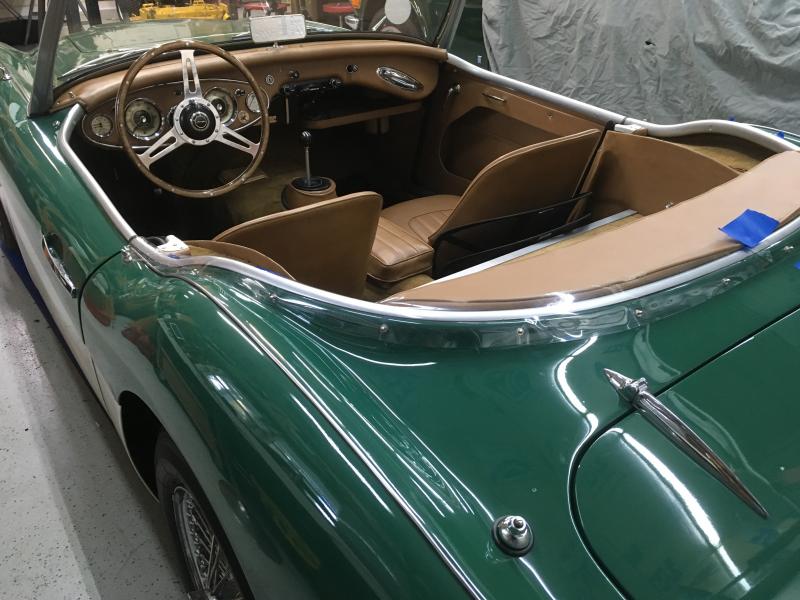 the above pic was before the heat gun treatment.
one place i need to trim a little. will mark with a black marker and trim when i remove the top. 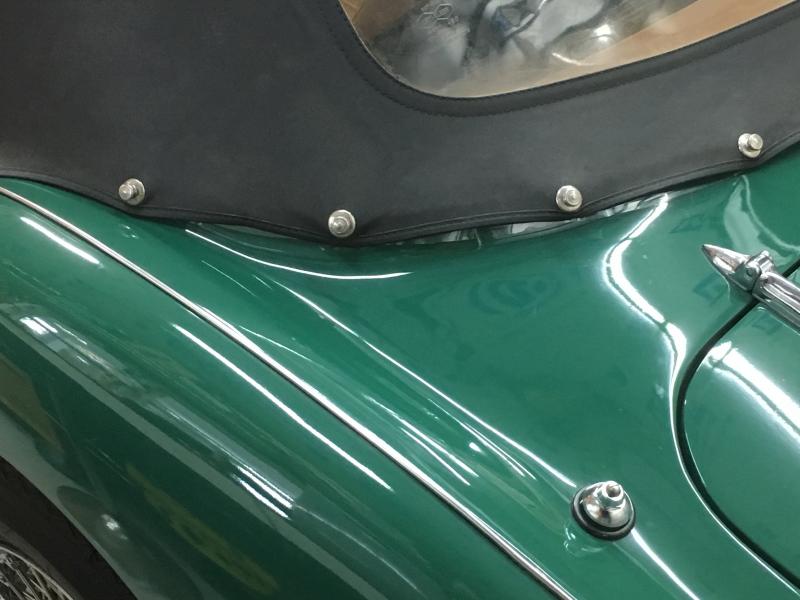 Next i plan to do the door rails in the same manner. since i do not have the snaps to hook the plastic on, i may use double sided tape and just tape the plastic to the bottom of the side curtain. will have to see how it goes at that point.

and when i have the top and tonneau off, i can pull up the plastic and hopefully have no marks to look at.

Offline
Interesting solution. What kind of paint did you use on the rails? Is it clear coated? Have you considered bonding soft felt or similar material to the undersurface of the tonneau and top where they contact the rails?

Offline
Powdercoat the rails The deep scratches can be filled with jb weld and smoothed over. The jb weld will withstand the temp of powder coating

Online
Why not just get the 3M clear vinyl and stick it on the car in the same area ? Same stuff they use for front end stone protection .
Way less noticeable once its on the car .
"If it aint broke ....dont fix it "
" Thats not an oil leak ..........its a special automatic British rustproofing system "
Best Healey in show ABCD Ottawa 2013
Best Healey in Show Boot n Bonnet Kingston 2013
G

Offline
You could have your rails wrapped in any color - or clear if desired (e.g. clear bra used to protect a vehicle's snout). Powdercoat is a more permanent solution though.
OP

Offline
i painted them an anodized alum color and clear coated.

powder coating is a good idea but a bit more expensive. i do not have a problem with scratching except when putting on the top. and the powder coat still does not protect the body paint between the rail and the snaps.

i also thought about the gluing the fuzzy side of velcro to the bottom. i was worried about the thickness and getting the snaps to connect. plus i would still be sliding something over the paint. with this way you slide the top over the plastic.

either way would probably help. this was just one way.
Similar threads