Offline
Yesterday I went to a party for one of my racing friends (finished grad school). He has an early AH 3000, a racing MGB and a Sunbeam motorcycle which I have mentioned here before.

He has recently come into the possession of a BSA 175 Bantam (it came from the same person who previously owned the Sunbeam).

The BSA is a nice little bike with a simple, piston-port design. This turned out to be a very popular bike with hundreds of thousands being built. The owner was telling me that it is based on a war reparations design (just as post-war Bristol did when they began to build BMW-designed engines)

I just looked at Wikipedia and they had this to say about the Bantam:

......it was in fact based on a German design. The Bantam was based on the DKW RT 125, a design that was received as war reparations, with the Bantam as a mirror image so the gearchange was on the right side as with other British motorcycles of the period. The same design went into production in at least two, and perhaps four, other countries. Harley-Davidson started producing their Model 125 in late 1947 (several months before BSA) and the occupiers of East Germany, the U.S.S.R. began building the Москва (Moskva) M1A model even earlier, c.1946. In East Germany the machine was made at the original DKW factory by IFA, which later became MZ and Japan also produced copies.

I didn't have my camera handy, but here's an online photo of a similar 175 Bantam (same colour too) 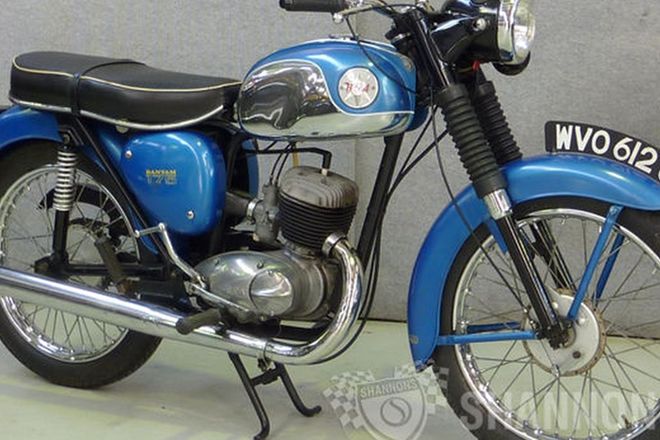 Offline
Cool little bike. I would have guessed it was a cross between a BSA something and a Jawa. (& would have been wrong, of course). I had a Triumph "Cub" way back when that I suppose was a similar class bike, although a bit smaller.
John C
http://www.coldplugs.com

Offline
was that the tiger cub john, my buddy had one 200cc and also a 175cc James
My worst fear is that when I die my wife sells my car for what I told her it cost
Similar threads