This weekend, following a very satisfying 25 mi run in hot weather w/o any issue, after a stop at a crossing, engine lost all of its power, finally stalling. I could easily restart it, but it kept stalling with no power. After 3 or 4 attempts, it started and kept running as usual, with full power including climbing uphill streets.
Arrived at home and waiting for the portal to open to go uphill on my driveway, same scenario : no more power, repeated stalls… Finally managed to bring the car on the horizontal surface of my parking, after a small dozen of start/full throttle (anticipating the loss of power…)/clutching-in/stall. Stopped the engine for 3 min in order to open the garage, then started it and maneuvered the car as if nothing had happened…

It seemed to me that this issue was fuel (and not ignition)-related, having no sign of misfire/surge/noises.

To make it short :
- Following a ride in hot weather (nearing 104°C, but engine kept between 160 and 180 °F), brutal and total loss of power and repeated engine stalls after 2 small stops at idle on moderate uphill slopes. Fuel in the tank, gauge at ½ (and fitted with the correct orientation !).
- Even during these difficult sequences, starting was (hopefully !) very easy and immediate, so a vapor-lock issue doesn’t appear to be the culprit at first sight,
- Carbs fully overhauled (no air leak, new jets and needle, new seals, no float issue, tuning done, and so on), electronic ignition, SU pump replaced 3 years ago.


--> My guess : fuel starvation issue. As it happened when briefly idling on a moderate slope (the fuel pick-up is on the front of the tank), yesterday I tried to run the car with a jack under the front member in order to simulate a slope, but it had no effect and the engine kept idling w/o any problem. So, the remaining option would be a temporarily clogged fuel line (but if so, why didn't it occur during the ride ?). I didn’t check the pump’s built-in filter yet, nor the filter (metal-made, so I can’t see inside) fitted before the carbs, nor the (original) tank itself.

Do you agree with my conclusion ? And before I start dismantling all the stuff, do you recommend some additional tests to confirm the issue ?


Thank you in advance for your ideas / advices.

Offline
Sounds like fuel vaporization to me. Stop the car after a spirited drive, fuel sits in line near hot engine, heats up, vaporizes and can't feed intake manifold.

Heat shield between fuel line and engine would probably be the fix.

Offline
I had similar symptoms caused by a kinked fuel line. Would run fine, then sputter and die. I think you're on the right track looking for a fuel issue.

Offline
Sounds like a failing fuel pump to me.

Offline
I would start with checking the fuel filter.
John, BN4
O

Offline
It is fuel vaporisation. Although the water was saying 160-180 the fuel in the bowls which are next to the exhaust was running much hotter. I have had my 100 for 26 years and this happened to me recently for the first time ever. Like you water temp ok, but the ambient outside temp was 36C and it got very hot under the Hood/Bonnet. It stopped then after
10 minutes it started ran rough until fresh cold fuel came through to the fuel bowls. Don’t fiddle with anything, just accept modern fuel is different.

Offline
From Norm Nock's book. He used this one.

Drawing is to scale - enlarge on copier to specified size and cut from aluminum. Fit heat insulation on lower surface with screws: 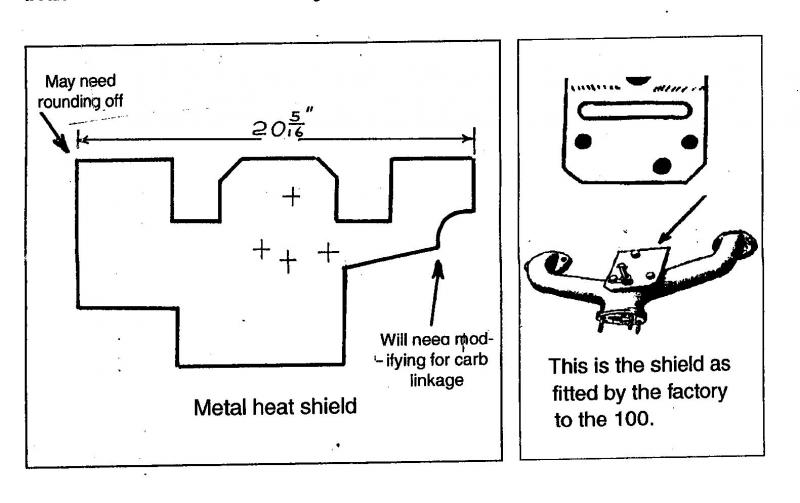 Also contact Joe Curto about his float bowl "coozies" insulating socks. I'd also insulate the fuel lines passing near the exhaust and across between the carbs.

Some folks have fitted bilge blowers at the cold air intake and directed the air at the front carburetor.

No filter is to be fitted between the tank and pump. As long as there are screens in the carb inputs you probably don't need a filter at all.
Steve Gerow
Altadena, CA, USA
1959 AH BN6 2-seat roadster / 1974 TR6 Emerald Green
Check out my galleries:
http://www.pbase.com/stevegerow

Offline
In my experience you normally have to wait for the engine to cool a bit with fuel vaporization. If you can restart immediately it may be a clogged fuel filter or fuel pump issue but the heat does suggest vaporization. You may also have more than one thing going on so I would suggest checking the whole fuel system. When it happened to me I wrapped the fuel line in DEI Vapor Lock Sleeve....

Offline
Just for giggles (though no laughing matter, mind you), check your electrical connections leading to your voltage ignition coil. That is one scenario that happened to me.

On my first Healey, my stalling issues after driving the car for a bit were contributed to a corroded gas tank, leading to a clogged gas filter and fuel pump, not to mention swelled fuel lines choking the flow of fuel in the line.

Stalling issues never truly lead to a single cause. There are many possibilities. My only advice is to start with the easiest and least expensive approach.

Offline
A friend with a BN2 had problems with the trunk battery cutoff switch. After a mile or two, it would heat up and ground the coil and the car would die. Might want to disconnect the black & white wire to the coil as a test.
Steve Gerow
Altadena, CA, USA
1959 AH BN6 2-seat roadster / 1974 TR6 Emerald Green
Check out my galleries:
http://www.pbase.com/stevegerow

Offline
Though the "fuel vaporization" folks are in the majority I am going to throw in with the few suspecting compromised fuel supply, and the fact that the problem seems greater when running than when idling makes me suspect that fuel flow is being somehow restricted.

I would start at the carbs, checking the small screen filters at the flat bowl inlets (if they are in place), then work back through the fuel pump to see if the coarse screen has picked up any trash. Of course, if your car has an aftermarket in-line filter be sure and clean it. Finally, pull the fuel pickup in the tank and inspect not only it but, as much as possible, the tank itself for the presence of some junk that may be pulled against the pickup by suction and fuel flow when the engine is running under load, only to fall away when it dies or is idling, etc. I've told the story before about the big leaf that somehow made its way into my car's fuel tank. Fuel flow would pull it against the pickup when the engine was running at speed, and it would fall away when the engine died or was idling, etc. Once I located and extracted the offending bit of nature all was good, though how the leaf got into the tank when the filler is inside an enclosed space is a puzzler!

Offline
Thank you all for your interesting advices and information.

Knowing what I already replaced on the car (ignition, rear boot switch, pump...), I'll start focusing on fuel supply (mainly clogged filters) and vaporisation, even if it's difficult for me to understand how they wouldn't have also prevented the engine to immediately - and so easily - restart.
I'll keep you posted - need to clean my flooded garage, first

You said: "it's difficult for me to understand how they wouldn't have also prevented the engine to immediately - and so easily - restart."

While I am not suggesting that your issue is debris in the tank it was mine and in the scenario I described the leaf would apparently be sucked against the pickup by maximum fuel flow, then fall away as the engine stalled, thus allowing it to restart and go through the process repeatedly. Depending upon the types of filters or screens that are present in your fuel system a similar phenom could be happening anywhere--or not.

Offline
Matt,
When it starves, suggest pulling one of the float bowl covers and see if the fuel level is drained.

I borrowed a pickup truck from a friend years ago. It would run 1/2 mile then stop, then start again right away. Turned out to be dirt in the fuel filter keeping the pump from delivering enough fuel to keep it running. It may have idled OK because enough fuel was getting through for that.
Steve Gerow
Altadena, CA, USA
1959 AH BN6 2-seat roadster / 1974 TR6 Emerald Green
Check out my galleries:
http://www.pbase.com/stevegerow

Not serious enough to put the cars underwater, thanks, but for sure a surprise job of drying and cleaning...

Well understood, I'll check these points. As outside temperature is getting lower, I intend to have a drive as soon as possible. Just in case it could provide a clue regarding the two main hypothesis

Offline
I had a one-time loss of power, coming off of a hour run with no problems. I just switched from overdrive to normal going down a hill.
Car lost power and was barely idling. I pulled over and let it idle a few minutes. Then it took off like nothing happened. Car temp 160, 60F outside.

No problem since and I've checked the overdrive operation a few times. I've read the above ideas of potential problems.
I'm looking for more ideas on this.

Would a malfunctioning OD cause this? Fuel vaporization maybe?

It's a '63 BJ7. Does the fuel pump act up intermittently? Strainers OK, plenty of gas. Any ideas appreciated. Dave
Similar threads