Spitfire Best year for a Spitfire?

Offline
Hi Folks-
Looking at a couple of Spitfires in my area. I know, they are the overlooked Triumph but every since I dated a Colonel's daughter in the late 70's who drove one I've had a soft spot. (In my head, maybe...)
What is the best year for them? I like the clean lines of the square backs and realize that improvements carried through the series but the Gawd awful safety bumpers are just fugly! Series 2's are cool looking and not horribly priced. (OK, no Spitfire is horribly priced) but I'm thinking a series 3 would hit a sweet spot.
Any opinions from the Spituminnati?
Thanks in advance for any shared opinions and knowledge.
Best-
Mike Burgess
Albert, KS
"Ran when parked." Aaah, those 3 little words that get a man in trouble.

Offline
IF you could get a consensus on such a question, I suspect that it might center around a pre-emissions Mk3. Strictly from my own viewpoint, though, there's much to support any year and model: I love the original series, the Mk2 got a little boost in power, the Mk3 got arguably the best engine, the MkIV was a great refresh of the body paired with somewhat of a back-to-basics interior, and the 1500 got nicer and nicer in many ways (save for drops in power for the "Federal" versions). Oh, and I actually LIKE the late "safety-bumper" cars, too!
-- Andrew (Andy) Mace, VTR's Triumph 10/Herald/Sports 6 vehicle consultant and keeper of the North American Triumph Sports 6 and Herald Database
G

Offline
My favorite (for a USA-model) year was the '73 Mark IV: it had the 1500 engine, later styling, small bumper guards in front, and (iirc) better seats. Easy to modify the engine and primitive emissions gear for increased performance. The '73 does not have the longer rear axles that give the later cars negative camber in the back, and improved handling, but the later axles are a bolt-in mod if you want them. The earlier engine, however, has a reputation for taking higher RPMs better than the 1500.

For a California residents, it's also very important to stay with a pre-'76 car to avoid smog checks, and smog laws in other states will govern which model year cars you may wish to avoid.

groupdeville said:
... The '73 does not have the longer rear axles that give the later cars negative camber in the back, and improved handling....
Click to expand...

Offline
Thanks for the replies fellows. I've just been on the phone with a guy who has a '70. Not a bad car and one of the few I can say runs. Usually they don't when I get them. I'm kind of digging the RAF emblem on the bonnet. Funny what gets to you, isn't it? This one is also a twin carb with SU's. Neat. I'll keep you posted.
Thanks again!
Mike
"Ran when parked." Aaah, those 3 little words that get a man in trouble.

Offline
Ok. I suppose if you really tried to pin me down on this subject, I would offer the 1970 as my favorite year. Unique in many respects from any other model year and, of course, the last of the original style! From new, a 1970 "Federal" car would have had the single Stromberg carb, but the only difficult thing about installing dual SUs as per the earlier cars is finding the carbs and, especially, the intake manifold!

FULL DISCLOSURE: After years... make that DECADES of wanting specifically a 1970 Spitfire, I found and bought one a couple years ago. Best part of all is that the one I got is in one of my favorite Spitfire colors: Jasmine Yellow. (Oh, and it happens to go very nicely with my Jasmine 1970 GT6+!)
-- Andrew (Andy) Mace, VTR's Triumph 10/Herald/Sports 6 vehicle consultant and keeper of the North American Triumph Sports 6 and Herald Database

Offline
You guys are such enablers! I dig it!
Seriously- thank you for the information. Ive never owned a Triumph with 4 tires!
Regards-
Mike
"Ran when parked." Aaah, those 3 little words that get a man in trouble.

Offline
Most consider the 1296 the best motor, I like the round tail. There was a Royal Blue 69 I posted about here that I sort of wish I hadn't passed on a few months ago.
OP

Offline
Hi Folks-
Here are some (admittedly bad) photos. The '70 is mine! It's another one of those "ran when parked" things. Did drop in some fresh oil and cleaned the carbies up a bit. Rigged it up to a gravity fuel source and darned if it doesn't run! Fuel tank is crusty and fuel line was plugged. Started the carb cleaner flush on the line and it sprung multiple leaks. New fuel line is in order along with a good tank clean and assess. Past owner gorilla'd the bung off of the tank so best case is a cleanout and some silver soldering. Sender looks like a relic from a shipwreck. At least it has a new starter and fuel pump. Mechanical- Ain't that easy!? Compared to Austin Healeys and Jags, Jensen-Healeys, etc. these are a cinch to work on! Haven't drawn any blood yet! 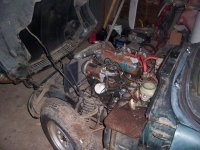 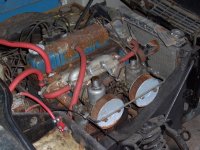 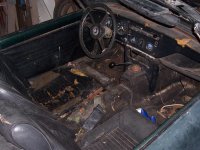 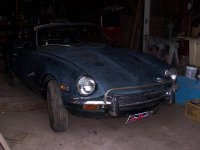 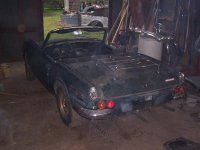 "Ran when parked." Aaah, those 3 little words that get a man in trouble.

Offline
Congrats on the purchase, looks like fun, get it to go (and stop) reliably and have some fun with it. Bit of a stretch of the legs, but our club up in Nebraska is having its Spring show in Papilion this weekend, or any other events https://flatwaterahc.org/events/

I'm so glad you took my advice and sought out the very best ever year of Spitfire!

Seriously, it looks pretty darned good, and you are somewhat fortunate that some previous owner managed to get hold of an earlier Mk3 intake manifold and dual SU carb set to replace the 1970's original single Stromberg (as found on all subsequent Spitfires). If otherwise stock, that brings you back up to around 68hp as opposed to the 60hp or so of the 1296 with single Stromberg!

And you've got the AMCO accessory tubular front overrider bar, which is also very, very cool!

Hard to tell from dark, indoor photos: is it #55 Laurel Green or #56 Royal Blue?

Oh, here's mine for reference. 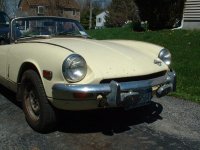 I should note that this photo is from the day I picked it up, before any cleaning was done after 5-6 years in the previous owner's garage.
-- Andrew (Andy) Mace, VTR's Triumph 10/Herald/Sports 6 vehicle consultant and keeper of the North American Triumph Sports 6 and Herald Database
OP

Offline
Thanks fellows-
This one is 55-Laurel Green with 11- Black interior. It's rough but straight. Don't see any sign of a traffic altercation in it's past. Rust and neglect yes. Not a weekend fix but not NEARLY as bad as the Healey 3000 that I dragged in a while ago. I do kind of dig the front bar and the luggage rack as well. Now all I need is time and the "bucket theory" of finance. (Throw $20 bills in a bucket and after you fill it and smash it down a couple of times pour it on the car. It'll get nice!)
"Ran when parked." Aaah, those 3 little words that get a man in trouble.
Similar threads