Although I have installed a fair number of in-line fuses to protect almost every internal circuit, I am reconsidering the installation a battery terminal fuse, installed in most modern cars, to protect against a catastrophic short in the direct battery circuit (battery and its main line power lead). Although the fuses installed in most modern vehicles rang from 150 amps to as high as 400 amps, I would expect a much lower amp fuse would be sufficient for my Healey. Since the main purpose is to protect against a catastrophic short, the fuse range I am considering is within the range of 80 amps to 100 amps at maximum.

Your thoughts and suggestions as to fuse amperage and implementation of changes would be appreciated,
Ray(64BJ8P1) 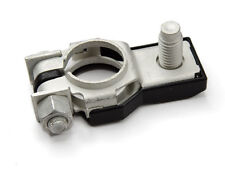 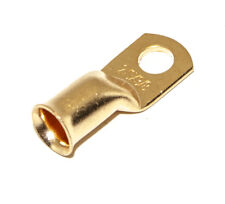 Offline
IIRC, most 'modern' autos use fusible links for the battery cable. They are 2 wire sizes smaller than the cable they are supposed to protect. I would not want a large melting wire under my vinyl battery cover, however.

Steve, I have a top poste battery in my Healey and this setup will fit nicely on top of my battery. The fuse block would sit on top of the clamp stud and the cable with the ring end would be secured on the fuse block stud.

Keoke, That was my initial thought but could not find the starter's drawn CCA and have no instrument to measure actual. According to the manual, the starter has a lock current draw of 430 to 450 amps @ 7.0v-7.4v which, I assume, means its full torque operating draw. Translating to CCA (defined as the number of amps that a 12-volt battery can deliver for 30 seconds while maintaining a voltage of at least 7.2 volts at a temperature of 0 Fahrenheit), I would expect that the number of fused amps @ 12v would be less but how much less is an unanswered question. I appreciate that when considering CCA when buying a battery is very appropriate so should be considered when selecting a fuse for the battery, however, would we need a 450+ fuse to allow for sufficient amperage for the starter operation under all conditions? If so, we will need quite a substantial fuse... and I do hope you will tell me a direct translation is a wrong conclusion.

John, I believe we did discuss it with respect to selecting a battery but never came up with a CCA for the original starter.

Offline
Ray ever seen these 30 amp and dual 40 amp fuses for marine apps. 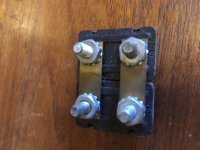 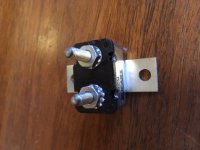 Keoke, good idea. Measuring my starter requirement would give me a practical number in line with how and when I would use the car. With the studded fuse holder, cable ring end and post clamp with stud, I can always bypass the fuse by moving the cable directly to the clamp.

I am beginning to think fusing the battery with the amperage draw or CCA as a fuse selection parameter is not practical although doable. This would be more acceptible if a Gear Reduction Starter were used as I have heard they require half the CCA of the standard starter. When thinking further, I realized that the CCA may not be a requirement when considering reviewing the definition of CCA with reflection on how we use our Healeys. I have no intention of driving my Healey when it is 0 Farenhite. Also, cranking for 30 seconds is far longer then it usually takes my car to start. Although I am not sure what amperage the original starter draws on a nice spring day to turn with sufficient torque and speed sufficiently to start my engine, I don't believe it is close to 450 amps the manual states as lock current draw.

Maybe you can rent or borrow a clamp on amp meter and measure your starters current I did not add any margin we will see.
Click to expand...

Clamp on ammeters only work with AC. You will need a known small resistance, usually supplied by a shunt, but if you know the battery cable wire size and length (either positive or negative cable), you look up the Ohms per foot, measure the voltage drop over that length of cable and calculate the current flow.
John, BN4

Offline
The fuse is on the battery to protect the cable - assuming that's the total length battery to switch to starter solenoid.

Isn't it a matter of the cable gauge and total length with a factor of, say, 1.25 to protect the cable.

John Turney said:
Clamp on ammeters only work with AC. You will need a known small resistance, usually supplied by a shunt, but if you know the battery cable wire size and length (either positive or negative cable), you look up the Ohms per foot, measure the voltage drop over that length of cable and calculate the current flow.
Click to expand...

Keoke said:
Naw John:Both current clamps and clamp meters read AC or AC/DC current with no need for circuit disconnection. Even, Ebay or Amazon got em.
Click to expand...

Yes, there are AC/DC clamp on ammeters that will read DC current - but you have to get one that uses Hall effect sensors. Most clamp on meters don't, they use the clamp as a transformer core. Those meters rely on separate probes.
John, BN4

Offline
Ray, the starters locked rotor amperage is the amps you would need to be considerate of. That is the designed max that the starter would draw in the worse case scenario. But an old starter could draw even more. Many motor protective fuses or circuit breakers can be derated somewhat because of the time that a motor is at a locked rotor state. Meaning that if all is working correctly the rotor starts to turn immediately and the ampere draw deminishes instantly. The derating would be in relation to the Locked Rotor Current. The high initial current is sustained by use of slow blow fuses or because of the number of cycles of current it takes a breaker to sense the overload. Of coarse DC doesn't have cycles but you get the idea.
Having said all of this as Steve has mentioned any overcurrent protection installed at the battery is only protecting against a possible fault in the cable between the battery and the solenoid. If the battery itself dead shorts it will either blow up spectacularly or it will just go poof and die. If the battery itself dead shorts it will have no effect on the rest of the car. If there are shorts in the wires contiguous to the solenoid, they are so small in comparison that they themselves will act like fuses and just burn open. In my opinion the only protection you can provide for the cable between the battery and the solenoid is to make it as big and as strong as possible. Using such cables as are in race cars or drag cars is an immediate solution.
About TV Shows-
"...you really can't restore a car in 10 days. I don't want to watch a race where people have to restore it in a week. It's not going to drive, and those cars never work. In real life, it takes years to get it right. " Jay Leno.

Offline
When we had this discussion a while back, I recall the primary failure concern was the battery cable running along the bottom of the frame becoming damaged and shorting to the frame (ground, or earth in Brit-speak). I seem to recall reading that the factory rally cars ran the battery cable above the frame.
John, BN4

John Turney said:
When we had this discussion a while back, I recall the primary failure concern was the battery cable running along the bottom of the frame becoming damaged and shorting to the frame (ground, or earth in Brit-speak). I seem to recall reading that the factory rally cars ran the battery cable above the frame.
Click to expand...

Similarly if the cable is routed above the frame this significantly reduces its proness to failure.

Offline
If you dimension the fuse to cope with the amps drawn by the starter motor you will end up with a mighty big fuse that will allow enough current to pass to melt most of the wiring in the loom if there is a short somewhere after the starter motor. I would instead take the starter motor out of the equation and put much smaller fuses on the cable(s) feeding the rest of the electrical system. I don't have the AH wiring diagram available right now, but I believe that there are one or two cables attached to the post on the starter solenoid to which the cable from the battery is connected that feed the loom.
N

Offline
I found this on Youtube: https://www.youtube.com/watch?v=d2nPHWNoDSA. A modern four-pot seems to draw around 100 amps, so I figure that it may be around 150 or so on a Healey. If voltage drops to 10 volts that would equate 1500 watts or around 2 hp, which seems reasonable. But again, if you put a, say, 200 amp fuse on the battery that would only protect the cable from the battery to the starter. If there is a short somewhere else in the system the cable would probably melt before the fuse blows.

Offline
I had found information online that stated that a small or medium gasoline engine would draw up to 400 amps when started cold. 60 - 200 when warm.

So our 8 - 10 ft cables have to be able to handle that for a short time. A fuse would have to not blow during cranking.

Lets say we ran over a rock which scraped the cable and caused a dead short to the frame. The fuse at the battery would then blow. No fire.

Would it not have to be approximately 500 amps?
Steve Gerow
Altadena, CA, USA
1959 AH BN6 2-seat roadster / 1974 TR6 Emerald Green
Check out my galleries:
http://www.pbase.com/stevegerow