My name is Andy, and I hail from Kansas City. In my care is my Dads 1966 Austin Healey 3000 BJ8. Its been in the family since 1967 when Dad dug it out of a snow bank at a car lot in Minneapolis. He drove it for decades, and after the first engine spun a bearing, and the engine which Austin so kindly sent him to replace it (in pieces...) started burning rediculous amounts of oil, he swapped in a Ford 302 from an early 70's Lincoln. Kept driving it until the northern salt got to it, took it apart, and then it lived in pieces for a good 20 years on a trailer.

Then in 2003, after visiting the Back to the 50's car show in Minneapolis and discussing it a bit with my uncle, we tore into the old engine which we had assumed was completely rusted up, got it apart (with a sledgehammer in some cases), got it rebuilt, and were back in the restoration business. It was a long road, but Dad got it back together.

He passed away 2 years ago, and while it isn't technically mine (its Mom's), I care for it. The interior still needs some work, and like any old car thats had a new engine put in it, it could use some tweaking. Anyway, that'll all be done in due time.

As for me, I'm an engineer, working in the rail transportation business. Spend waaaaaay too much time in front of a computer, but I do welding, fabrication, mechanical work, camping, and whatever else I can when I'm not working.

I've got a lot to learn, but hope to help as much as I can. 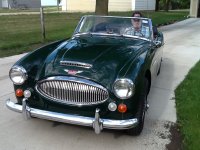 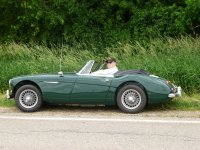 Staff member
Boss
Online
Sorry to hear of your Dad’s passing. That’s quite a journey that cars been on. Welcome to BCF.
Maybe post those pictures in our Media gallery too!

Life is what happens while you're busy making other plans - John Winston Ono Lennon
Click to expand...

Offline
Thanks! I'll try to get some pictures together for the gallery.

We think of him every time we drive it.