Offline
My '59 TR3A recently had a clutch master cylinder failure. Basically, it came apart internally while my mechanic was delivering the car after annual maintenance. He was forced to shift by speed matching to get it back to his shop. This car has approx. 5K miles since the restoration was completed in June 2012. The MC that failed is an after market unit that I bought in 2011, and it looks just like the originals. However, when we searched a replacement MC , we noticed that the casting was redesigned, with a totally different shape. So, I'll be looking for a NOS Clutch MC.


So, has anyone experienced a sudden failure like we did? Can anyone comment regarding the new design and details for the change.
Thanks, Frank

angelfj1 said:
So, has anyone experienced a sudden failure like we did?
Thanks, Frank
Click to expand...

There is a rash of horrid parts being supplied by all 3 of our usual distributors. Some parts are obvious, but others, such as your MC, are not obvious.

Personally, I do not let a mechanic within 50 feet of any of my cars. Then, I rebuild original parts whenever they are rebuildable. Since I implemented these rules, I have no sudden failures like I used to.
John

Offline
Do you know specifically what failed? If the casting and bore are sound it seems you could just replace what failed plus new seals while you're in there.

Offline
I suspect NOS is going to be really hard to find; might be easier to find an original in rebuildable condition, or to have someone put a sleeve in it for you. As long as the bore is in good shape, installing new seals is pretty trivial. Unfortunately, the steel and aluminum constructions, combined with conventional brake fluid, tends to corrode the bore.

I'd offer to give you a sleeve candidate; but unfortunately I won't be able to do that for a few months.
Randall
56 TR3 TS13571L once and future daily driver
71 Stag LE1473L waiting engine rebuild
71-72-73 Stag LE2013LBW waiting OD gearbox rebuild

Offline
The TR pushrod length is 4-1/2" so you might need to swap your pushrod into this new one. And if your output pipe is flat rather than angled like this one, a slight bend will fix that. Just rebuilt one for my 58.

AFAIK, Pegasus is the only source for genuine Girling left.


A few years ago Moss had a run of Classic Gold branded m/c for the TR3s that used sub part internals but looked great on the outside. At that time they offered free exchanges but it was a few years ago.
PeterK
1958 TR3A 1966 TR4A both HVDA

Offline
I agree with "TR3 Driver"...have the original sleeved.

Offline
I think he said the original was replaced with the failed cylinder. Otherwise White Post is a good choice if they're still around.
PeterK
1958 TR3A 1966 TR4A both HVDA

Offline
Frank, I've had a couple of sudden M/C failures when the internal piston return spring broke. I've still got a collection of ones I used to replace, as well as an internal part collection from all the M/Cs that were too corroded to rebuild. Let me know what you need; I will check if I have a rebuildable core somewhere. Like Randall says, you're better off carefully rebuilding it yourself. The valve on the back end needs to be scrupulously clean to seat & seal properly. Jeff
S

Offline
I was looking on line some time back, 6 months probably, and I believe I saw some NOS ones on amazon, but my fear would be something older like would have decaying rubber, so like what is suggested a good rebuild would most likely be better anyway.
OP
A

Offline
Thanks Jeff, and thank all of you that replied. :smile-new:

So, because of the sudden and unpredictable failure, we are concerned about the brake master which is the same design, and will replace both with the new design.

This really bothers me. After a 12 year restoration where Brian and I we meticulous about originality, its a shame to be forced to do this. However, a clutch failure one can usually recover from, but not necessarily a loss of brakes.

The worst part of this event was the unpredictable and sudden nature of it. Hey, look, it might be a fluke, but reproduction parts quality has been declining for years. So please allow me to be pessimistic!

Following are some photos and the words of my mechanic, Brian, as he reported the details.


Made it back to the workshop by starting in gear and carefully timing the gearchange for clutch less shifts. Everything underneath looks OK but took the pushrod off and MC piston is stuck deep in the bore. Non-return valve should cause this to hold fluid in the slave and keep the clutch itself disengaged, but obviously that's not the case 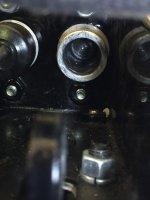 Internal pushrod for the non-return valve failed. Popped out of retainer cup (see where retainer metal is torn by my fingertip) and pushrod bent over on itself. Didn't we have problems with these cylinders when the car was going together? smartphone. 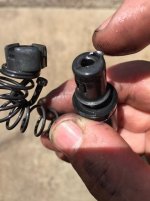 Oy-vey! New cylinder is quite a bit different from what we got back in '11/'12. Going to remove the old one and get a better look at the condition of the bore. 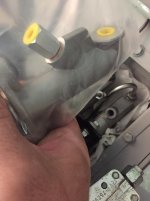 Bore on the old cylinder is in pretty poor condition. I know the clutch is used more frequently than the brake, but I'm wondering what the brake MC looks like and is it destined to bend the link rod like this one did? 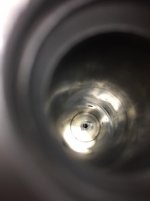 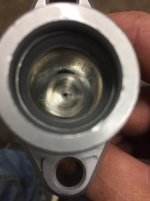 Offline
I think the key might be in your mechanic's quote: "Didn't we have problems with these cylinders when the car was going together?" I bet the rod got bent during installation. (Remember my rule #1?)

The picture may not show well, but I am pretty sure I have honed and polished bores worse than your MC. If retaining that style is important, then attempt a hone job...and move up to a sleeve if honing doesn't hold a seal. You can get the internals from any other MC of same bore and depth. Rebuilding what you have is not a problem...buy new if you need to save time, though.
John

Offline
I have had several repro cylinders go bad with leaks from bore wear in only 12k miles.First one went about 4k.
I think the issue is dot 5 is not as slippery and the modified, from original design ,one seal on the piston instead of two which allows the piston to ****.
I believe that all available repros,Moss ,Peagus,Willwood etc come from the same chinese supplier and none have the origiinal two seals,and share the rubber band boot retainer.
I have a apple hydraulics resleeve awaiting installation,but dont expect great life as the internals are new repro Moss Gold with one seal.
Tom
OP
A

Offline
John, that was not what Brian was referring to. During the restoration of TS58476lo, we discovered a serious defect in Moss Gold hydraulic master cylinders. It was documented on this forum. All of my posts have been wiped/ purged. As a result, Moss stopped offering that product.

Offline
You mean these threads:

Some are still around. It looks like similar recommendations back then...sleeve and rebuild the original if at all possible.
John

Offline
Yes I had a double grooved piston seal unit once and the return is slower; the clutch responded slower and would sometimes drag. I believe the second seal was felt or something for dust and the PO put an O ring on it.

Offline
Wow - that's an interesting failure. I wonder if the retainer cup was made from metal that was too 'soft'. 'Back in the day' OEM material and tolerance (Girling, Lucas, etc) was really good. Today, who knows. Jeff

Offline
Smells more like improper assembly, to me. Notice how the clip is torn outwards, way off to the side. The head of the rod is supposed to be trapped in the bore of the piston, which holds it centered. But it looks like it was caught between the clip and the end of the piston, then the cylinder was forced together, which bent the rod and tore the clip. 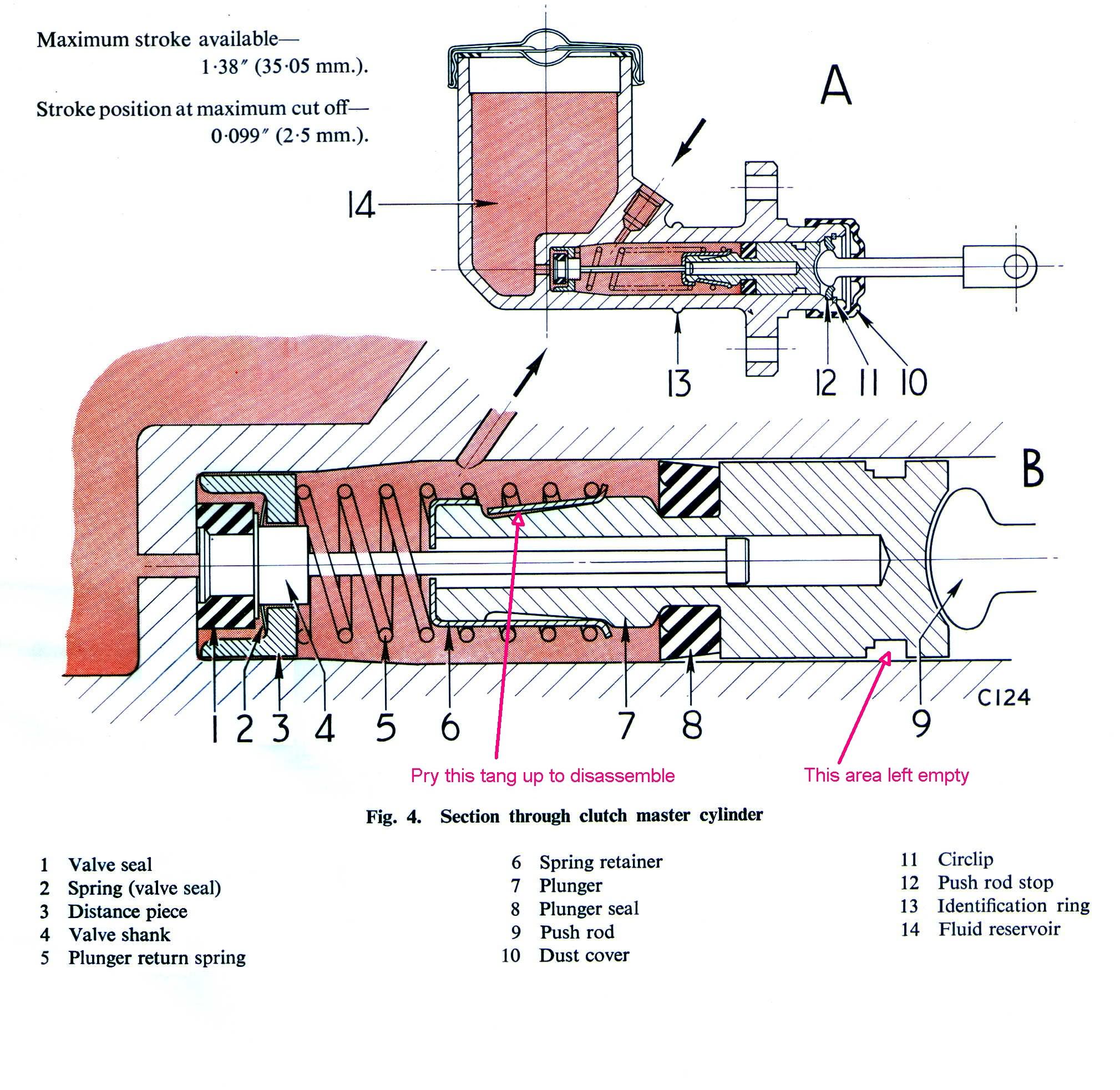 TR3driver said:
FWIW, even Girling dropped the double seal later on. Somewhere, I have an instruction sheet from Girling saying to leave the groove empty if it is present.
Click to expand...