Offline
...my 1969 Austin Healey Sprite Mark IV was assembled. I wonder if any of the workers on the line would have any clue that one of the various Spridgets they were sending down the line would still be around 50 years later.

The car was shipped out in July 1969, making it to the U.S. in August and was earmarked for a dealership in Chicago. For the next 25 years, the history becomes muddled, other than evidence of a collision on the left rear of the car. Some restoration work was done in 1994. In the mid-2000s, the car was in Pennsylvania where it was purchased by a college student. He proceeded to use the money that his parents were sending him to continue to fix the car as opposed to buying books. When the parents got wise to the car, he was forced to sell.

Longbridgehealey (Larry) purchased it as a driver while he was restoring his '59 Bugeye. When he finished the BE, this Sprite became superfluous, so he put it up on the market. I had seen it for sale each time I drove to my parents' house. One afternoon, I was supposed to meet a couple north of Baltimore to discuss their wedding. Due to the weather and traffic, they cancelled the meeting. Having some time on my hands, I thought "Well, let me go see if that car is still for sale".

Offline
That is a great story, but it makes me feel old. It doesn't seem like it was that long ago my Austin Healey 100 turned 50, and it was made in 54. Then I remember the Bugeye's 50th, etc.

Anyway, my first car was a 66 Sprite and I still have a soft spot for them, great that you have the car and know some of the history.

Offline
Nice to know some of your car's history. The only thing I know about my Sprite is that it was a daily driver by the PO. He tore it completely down for total restoration. But then he got a divorce instead. That's the condition I got it in.
Was Man nicht im Kopf hat muss Man in den Beinen haben
'48 Ford Prefect
'67 Sprite (project)
'74 Super Beetle
http://enfoprefect.org

Offline
I am actually pretty fortunate - I know the dealer it came from and the names of the 2 previous owners. It was bought new in california and moved to Florida with the 2nd owners. I got it from them and they had had it in there garage for about 13 years after a rear end collision in the parking lot of his work.
John-Peter Smit
1976 MG Midget
1969 Vauxhall Viva GT
1958 Fiat Multipla (Barn art)

Offline
Hi, David, About once a month or so I still try to remember the name of the seller or even the little town in Pa. that we bought that car in. I remember it was north of Harrisburg, over the river, and was quite a small town. He also had his older brother there to make sure he got his asking price and didn’t budge off of it. Pam and I were leaving the next morning on vacation and had most of our extra spending money in our pockets in cash. I knew we were doomed when I saw it sitting there. I do remember asking him if he was confident it would make the seventy mile +/- trip home in 90 degree heat. He was sure it would, we trusted him, and it ran like a champ! We still kinda miss that Sprite. If we ever remember, we’ll get in touch!
Larry (now happily retired in Florida, still have both Healeys)
Never tease an old dog, he might have one bite left.
Ignorance is curable, stupid is forever.
Women and cats will do as they please, and men and dogs should relax and get used to the idea.

Offline
A happy birthday to your Sprite!

I do wonder too if those workers would have imagined us restoring and enjoying these cars 50 years later on. (Or more, Penny the Bugeye turns 60 this August.)
Drew Frink
'59 RHD Frogeye Sprite :frog: - "Penny" let the rebuild begin!
'66 RHD Morris Minor - "Maggie" alive and driving
'70 RHD MGB - off for an engine rebuild!
'19 Triumph Bonneville T120

Offline
My ‘59 Lambretta is also 60 and drives great. I’ll finally be replacing the points with electronic ignition next month. 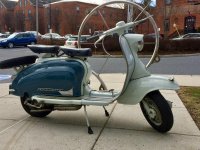 Never tease an old dog, he might have one bite left.
Ignorance is curable, stupid is forever.
Women and cats will do as they please, and men and dogs should relax and get used to the idea.
Similar threads