Offline
All,
I have just removed the steering rack for service.
Boots are original, 44 years old.
I was thinking replace just because.... yet... them seem perfect.
No marks, cracks, and still very elastic... is this a case where the originals are better then what is available new?
Just put them back on? they are inexpensive, that is not the issue, just wondering about quality...
Any one have any insight?
Regards,
Stephen 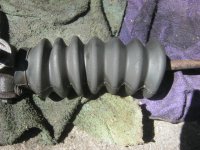 PS: and in case any one is wondering, the outboard edge is 3 3/8" from the inboard side of the tie-rod nut.
...seems to be a good installation dimension for longevity, (44 years).

Offline
My guess is that those 44 year-old boots have a better chance of surviving another 20 years than a set of new boots. But that is just a guess.

BTW - I think the boots on my TR4 are 56 years old and they are still fine.

Offline
I agree. Use the originals if possible.

Offline
Gentlemen, Thank you very much. I will use the originals.
Any comments on the tie rod ends?? ...they seem tight but boots are gone....
I hope to be pulling the unit apart today, see what the rest of it looks like.

Offline
The boots are probably not original, if they are in such good condition, but that really doesn't matter. They are probably way better than what you can get today. The rubber used today is absolute garbage. The manufacturers have to know that, but keep pushing parts with rubber that doesn't last a year.

As for the tie-rod ends--whether you get new ones or find some generic replacement boots that fit, the rubber will fall apart in a year, at most. That happened to the Lucas tie-rod ends I put on my TR4A. I found generic boots to replace them, but those were gone in a few months, too. I had bought extra boots, just to have a few spares, and those are cracking now as well, even though they were stored in a sealed plastic bag.

My solution was to make boots out of some thin, flexible leather I have here. Leather is tough, oil-resistant, and flexible. My only concern is about water resistance, but this is, after all, southern California, and I don't think they'll get wet much.

Another option is silicone. There are some silicone boots for sale on eBay that might fit. They're sold out of eastern Europe, so shipping may take a while, and I don't really know if they are any better. Hard for them to be worse, though. There are also some polyurethane boots around, but I couldn't find ones that were close enough in size.

Offline
I have used these generic boots on my Jaguar tie-rods and they have held up fine.

I think they would also fit the TR but you should verify that. 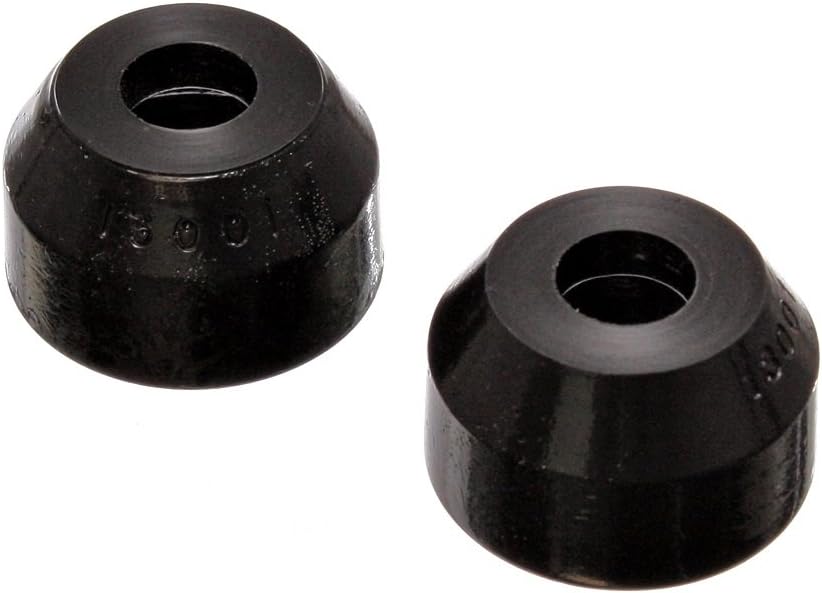 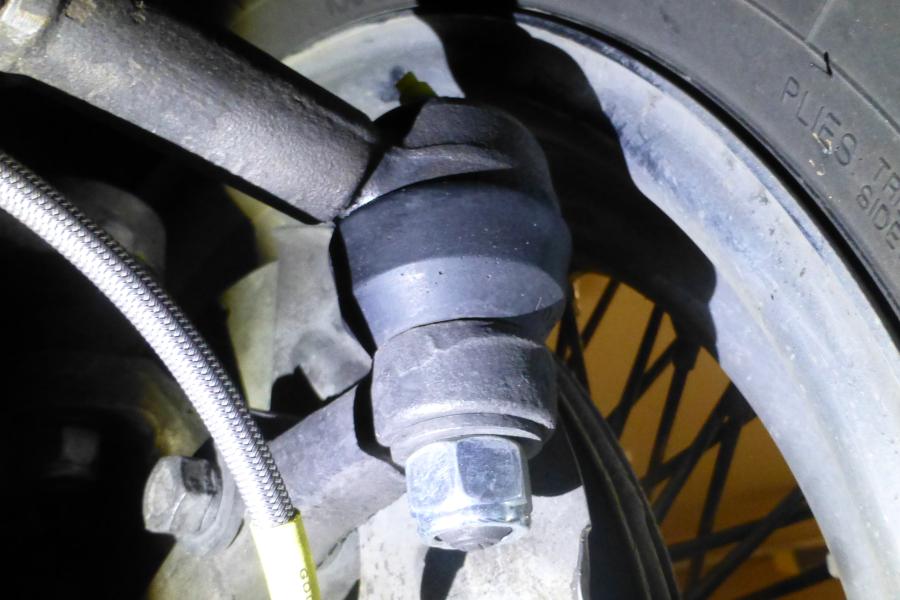 Offline
Sarastro, I have had the car since 86... so they are at least that old, I will re-use them.. must be 'good ones'.
I will look at the boots Geo Hahn suggested... the tie rod ends are tight, just need to clean and re-lube, if that is possible....??
OP
S

Offline
Geo Hahan, thanks, I will look into those!
hmmm is there a size? still have to see if I can clean and lubricate mine....

BTW... thanks for the pics! Very clean!!!!! Does she ever go out? maybe that's why they are lasting?
OP
S

Offline
All,
ok... now I am earlobe deep in steering...

View attachment 63833
Tie rod ends: sounds like new ones are hit and miss as well? ....try to clean mine and re-lube? or just get new ones that have the grease fittings? 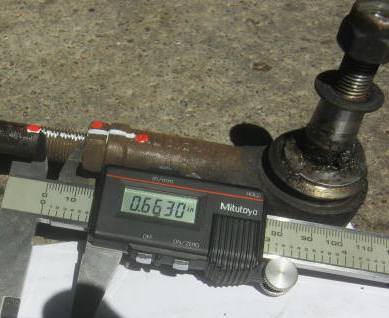 Lower steering column universal: I removed to clean, maybe paint and discovered a serious "catch" in one of the axis, feels munched... yet is still tight. The ones I see on-line do not look as robust as the one on the car (sorry I forgot to take a pic).
Comments? Moss at least looks cast, RF seems to have a stamped plate component... (it is currently soaking in varsol, and my fingers are crossed it will free up.

Tush,
I think we are neighbors so to speak, I hope you got out for a run on this gorgeous day.

Offline
So far I'm happy with DH 19
http://trf.zeni.net/TR6bluebook/index.php?page=115
Ken @
kencorsaw "at" aol.com
DRIVE 'EM IF YOU GOT 'EM

Offline
Since the ones you're using are 'lubed for life' I don't know an effective way to clean and re-lube. With a Zerk you can just pump in fresh grease and the old will get pushed out.

Those generic boots are okay - the keep the grease in and dirt and water out which is pretty much the job that needs done.

Offline
Geo Hahn, Good to know. Nice trip! Well, in that pic she looks so clean. Very nice.
I ordered new ones with grease fittings... but will still see if mine can clean up.

Offline
Gentlemen,
As I dig the 'steering' sandy hole deeper...
Opinion pls:
The Pinion, there is virtually no wear on the lower thrust washer.
The top thrust washer has significant wear.
The thrust washers do not appear to be available. 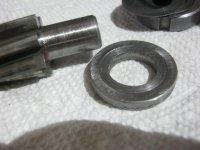 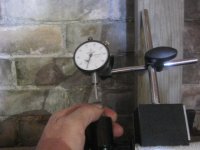 I expect the warn pinion not matching the new flat surface will quickly 'wear into' the trust washer and there will be more clearance/play....

Offline
Summary:
-44 year old boots(gaters) are probably 'good ones', probably better than new.
- FYI: were installed 3-3/8" from tie rod end lock nut, probably a number to note.
-A suggestion of a good tie rod boot.
- https://www.amazon.com/gp/product/B0...?ie=UTF8&psc=1
- I have ordered new.
-Lower steering universal - solid, yet a stiff catch... shopping.
- trying to see if I can find like original (robust), if not RF as suggested. 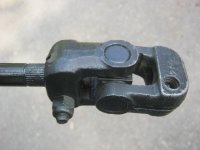 Thanks again to all.
Cheers,
Stephen

Offline
Want to see the TRF U-joint installed.....nothing puny about it. 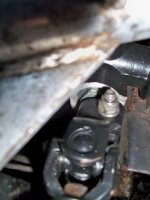 Offline
Pool boy,
Thanks, I will have to call them and ask.... I see both RF and Moss use the same Exploded Graphic... it lead me astray... 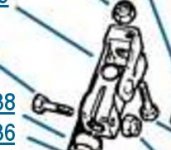 Yet I see a picture of the one like yours on the Moss Item, perhaps it is the same one RF sells, I will call then and ask, thanks.
(Hate to have to replace mine, is so solid and tight, just has a nasty 'click' which of course is a sign of things to come.)
I take it that it is sturdy?

Offline
That's just a drawing !
Yeah, I'd call the real thing sturdy...good enough for me.
Ken @
kencorsaw "at" aol.com
DRIVE 'EM IF YOU GOT 'EM
OP
S

Offline
Poolboy, the saga.... ordered from Moss.... was stuck in LA post office for 5 weeks. Found one at a supplier here in Canada, hour drive... picked it up and low and behold original!
Installed and done...
of course the Moss part arrived the next day.... returned.
Thanks again.
(now I just have to figure out my major vacuum issue..... becoming not fun.)
Similar threads