Link is giving me opaque ceramics on eBay. Boy, did that BJ get apart and put together strange!:wink-new:

I researched the BJ* on eBay. Yep, it is all apart. The tranny is a center shift (I think). I do believe it is a BJ8. I also just noticed cutouts for placement of the additional markers. Phase II?
OP

Keoke:
Link is giving me opaque ceramics on eBay. Boy, did that BJ get apart and put together strange!:wink-new:

Marvin, that is an understatement! Steve Byers, do you have this one in the BJ8 registry?
Bob McElwee
'62 AH Tri-Carb(sold)
Miss BT
J

I particularly like the statement "minor rust showing in the typical dogleg areas...." - not much of an understatement there.


Bob McElwee said:
Marvin, that is an understatement! Steve Byers, do you have this one in the BJ8 registry?
Click to expand...

I doubt that Steve does , check with the closest Florida salvage yard.

Yikes! The chassis plate on the red one looks like an original. If I were the person who paid $85k at Barrett-Jackson for the black one, I might check to see if I have a repro chassis plate.
Rick
"Madman in a death machine" My Nasty Boy Build: > BritishV8 Forum: "The Exploder" - HealeyRick's Austin-Healey BJ7 w/ Ford 5.0 <

Offline
If Tanner is passing on restoring this...
Something doesn't look right with both front amber lights. There should be two sets of lights on each side, one clear, one amber, and it does, but something looks off. I believe the amber should be on the outside, easy enough to swap the lens. Kinda seems like a 64 front end, one set of clear turn signals and the amber set was added. They seem not level with the clear lens, not on the same plane, aluminum is not stamped out around the lens. They are in the curved area and too near the grill. 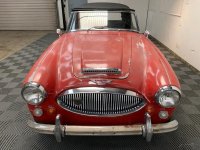 The chassis plate on the $85k Barrett-Jackson car is hard to see, but it looks like a repro. It would be interesting to see the Heritage Cert. on this chassis number. Wonder if the motor number on the BJ car also matches the Heritage Cert. Both cars passed through Tanner's shop. The eBay listing says the red car's title is "clear" BJ doesn't sell cars without a title. Very curious. Steve Byers where are you? View attachment 65435
Rick
"Madman in a death machine" My Nasty Boy Build: > BritishV8 Forum: "The Exploder" - HealeyRick's Austin-Healey BJ7 w/ Ford 5.0 <

AUSMHLY said:
If Tanner is passing on restoring this...
Click to expand...

I heard 'through the grapevine'--so take with a huge grain of salt--that KT got out of the restoration business and only buys/sells now; anybody know for sure? I'd also heard that his father did most/all the body work on his projects, so maybe he retired (or worse)?

Bob_Spidell said:
that KT got out of the restoration business and only buys/sells now;
Click to expand...

Offline
[FONT=&quot]I have several friends around the world who keep their eyes open for mention of BJ8s on the internet (or that they come across, or know about) and send me links. I couldn't possibly have documented 9,474 BJ8s all by myself and I certainly appreciate their help. One of them notified me of "34154" on eBay in August. I had seen another "34154" offered for sale at Barrett-Jackson in 2006. The cars did not appear to be the same. The email exchange with my informant is below, but not in toto. I have not received any explanation from the seller beyond his initial response:
[/FONT]

[FONT=&quot][FONT=&quot][/FONT][FONT=&quot]"I’ll research this.
We purchased this car from the same seller we bought the other one from years ago that we restored. It might be a duplicate title."

[FONT=&quot]The car currently for sale is the same one offered for sale by someone in Denver, NC in Hemmings in June, and identified as HBJ8L/31895. You sent me a link to that sale on 24 June 2020. The photo shows the original engine serial plate for 31895, but the body plate was missing in June and I see it is still missing.[/FONT]

From my informant to me:


Whoa, interesting development even more so b/c there are photos of both the firewall and engine tags.

If you will, please.keep me posted on any follow up.

[FONT=&quot]I have just sent a message to the seller to point out that something isn’t quite right here. HBJ8L/34154 was sold at the Scottsdale Barrett-Jackson auction in 2006 for $84,700 and it was a Black car described as a “Kurt Tanner restoration” (I have photos and the description of the car from the offering). If that car was 34154, then this one can’t be. We’ll see what [the seller] says about that.[/FONT]


From my informant to me:
the front shroud makes me shudder!!
Steve Byers
HBJ8L/36666
BJ8 Registry
AHCA Delegate at Large
Havelock, NC

Offline
I am shocked, SHOCKED that someone would (possibly) counterfeit an Austin-Healey VIN plate (except for a '100M LeMans,' of course). OTOH, I am strangely heartened that there's still enough interest in our cars to make that crime (possibly) worthwhile.

Bob_Spidell said:
I am shocked, SHOCKED that someone would (possibly) counterfeit an Austin-Healey VIN plate (except for a '100M LeMans,' of course). OTOH, I am strangely heartened that there's still enough interest in our cars to make that crime (possibly) worthwhile.
Click to expand...

It's too bad that the original VIN and body plates were attached to the firewall only with two small screws each. That makes it very easy to remove/misplace/lose them, re-create them, or install them on other cars they don't belong to (by mistake or intention, for whatever reason). After documenting and tracking BJ8s for the last 22 years, I can say that there are an incredible number of BJ8s (and, I'm sure, other models) running around now with scrambled identities and many owners aren't even aware of it. Some of them have been sold at well-known venues by well-known restorers with good reputations. I have been trying to spread the word that anyone who is interested in buying a BJ8 should check with the BJ8 Registry to see what information about it is available BEFORE buying it. It's better to know what you are buying up front before money is exchanged, rather than to be surprised later on. Of course, many people don't care about the integrity of a car and the "numbers" are not important to them, especially if the title agrees with the VIN plate. But are the plates original, and do they belong to THAT car?
A good part of my time as BJ8 Registrar has been spent trying to determine the true identities of cars that are discovered to be incorrect and (whenever possible) get them officially restored to what they should be. Sometimes that is relatively easy, or impossible, depending on the particular registration authority involved. Whenever the VIN of a car is not included in a sales description, I am always suspicious of the reason for the reluctance.
Steve Byers
HBJ8L/36666
BJ8 Registry
AHCA Delegate at Large
Havelock, NC
Similar threads