Anyone have any suggestions? also I think the VIN number should have an"H" in front of it to designate BT7. can anyone decode the VIN number I have - other than the obvious ' it seems screwed up'. the other clue that the body is not a BT7 is that it has drum breaks all around.

thanks for any help you may have.
Rob

Offline
Hey Rob,
Yep, sounds like someone made a mess of the VIN/Car number. Like Hugh said, someone probably took the batch number and put it in front of the car number. What I would suggest is taking off one of your aluminum cockpits trim pieces - door should work good - and find the Jensen body number stamped on it. Hopefully it might be 3056. But if not, get that number and take to the British Motor Industry Heritage Trust and see if with that only you can get your original Car Number. Having the wrong engine number won't help with this search as obviously from a different car. I also agree with you that drums all around make it a BN4, not a BT7. As to your current car number would imagine that some DMV clerk mistook the L for left hand drive as an E and now you're stuck with it. Maybe if you take a Heritage Trust Certificate in to your local DMV to prove the correct number might be able to get it corrected with them but good luck on that. Tried it once on a 1966 BJ8 registered as a 1969 - I know only 1969 ever made - and could never get it corrected to the right year of 1966. Oh well, guess I should have sold it as a 1969 and made thousands ! My Healey books show the first BT7 being made in March, 1959. Also you can get a new car number tag from Moss Motors and then have it stamped correctly by Clarke Spares in PA with proper ownership documentation. Don't have the web address handy but you can google Clarke Spares.
Good luck,
Mike
Mike Lewis, 1956 Austin Healey 100M - Registry Confirmed
D

As Mike says the best way to get the information you need is through the Heritage trust, link below. With the body number they can give you the rest of the information! If the car was a first series BN4 the body number would have been stamped on the inside of the cockpit trim, if not, the other places to look on the 100-6 for body numbers is on the bonnet (Hood-where the hinge is attached), on the boot lid (Trunk-where the prop is attached), and on the bonnet front latch assembly that is bolted to the shroud.

Offline
Thanks Duane, Mike and Hugh - I'll check those places and go to heritage trust. yea, i'm not sure what i'll get from the DMV. I'll let you know how that goes.
OP

Offline
Well, some time has passed and I passed my information to the British Motor Industry Heritage Trust. They came back with a 1960 3000 Mk 1 with chassis number H-BT7-L/12120. Which is kind of what I expected. I couldn't get any other good body numbers off the car in the time I had. I checked a couple pieces of cockpit trim and didn't find anything, but I should have checked them all. They say the original car was black with red interior , but my car was repainted red, but now that it is stripped, its obvious it was originally British White. The mechanics swear it is a BN4 with a 3000 engine which is making more sense. But they think it was manufactured that way.

I suspect that the 3000 (built in 1960 engine because it has the pre-carb configuration) engine was put in a BN4 body at one time (after original purchase). I will continue to search for identifying body numbers on the chassis/body.

Regardless of what it turns out to be - I'm excited. Its stripped of engine/trans/wiring/interior/chrome and about to get bead-blasted and painted original white. 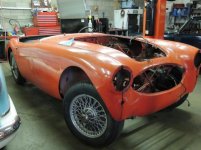 Thanks for your patience.
Rob

Offline
You say the body is not a BT7, but a BT7 is exactly the same body as a BN4, they are both 4 seaters. The engine will fit no problem.
DerekJ
www.healeysix.net
OP

Offline
Thanks Derek! I'm happy to keep on restoring a 3000 engine in a BN4 body since i have no plan to sell it, but I will hand it down to my kids for their enjoyment..... many years from now.
Similar threads