Offline
Does anyone know where I might be able to purchase the fiber washer/gasket that sits between the chrome gas cap and the escutheon that connects to the gas tube and gas tank on the rear deck of the 1960 TR3A? I searched my normal suppliers and no one sells the item. The OEM washer for my model year is definitely fiber and not rubber, but a rubber substitute should work if it is not too thick. If a replacement part is not available, has anyone successfully made a washer from gasket material? I am simply trying to help reduce the gasoline fumes that tend to collect in the garage after I have driven the car.
D

Offline
Some of the fumes may be coming from the vent tube on the tank. I have been told they can dribble gas if the tank is full and it is cornered vigorously.

Are you sure the seal is where the fumes are coming from?

Offline
I found an Oring at Ace that has been working for several years. The fiber never worked well.

Most fumes come from the carb jets leaking.
John

Offline
+1 to leaking carb jets and/or float bowl seals. I recently resealed both carbs and now virtually no gasoline fumes in garage.

Offline
Fuel tank sender was another leak that took me several tries to seal. Weeping at the bottom of the tank can be hard to spot as well, since you can't really see down there and gasoline evaporates so quickly.

But like John said, the carb jets and the float bowl mounts are probably the most common source of excess odor. They can easily weep so slowly that it never drips. Rub your finger along the bottom then smell your finger. If it smells like gas, there's a leak. The cork seals never lasted more than a year or two for me (under daily usage), nor did the rubber bowl mounts. Changing the gland seals to nitrile O-rings helped a lot, as did installing a heat shield under the carbs (to help keep exhaust heat away from the float bowls and their mounts).
Randall
56 TR3 TS13571L once and future daily driver
71 Stag LE1473L waiting engine rebuild
71-72-73 Stag LE2013LBW waiting OD gearbox rebuild
OP
T

Offline
David - thanks for your response. I had been alerted once before about the vent tube dribbling when cornering, but my fumes are most noticeable after I run the car for while and then pull back into the garage. It may be normal but I keep trying to isolate the cause and reduce the fumes. thanks!
OP
T

Offline
Randall - thanks for the hints. My original SU's are in such perfect sync that I always hesitate to touch them, but substituting the cork for nitrile O-rings sounds like it might be worth the risk. I have seen the heat shield in Moss and other catalogs. Do I need to buy one or two of them?

I know that the problem is related to a heated engine. I do not smell the gas fumes if the car simply sits in the closed garage without running for a week or so. I will work on the SU's first and then tackle the fuel tank sending unit if the new o-rings do not solve the problem.
OP
T

Offline
Thank you! Your advice is most appreciated!
OP
T

Offline
CJD - do you think I need to replace all gaskets and seals in the carb jet assembly, or are there certain ones that seem to be most critical?

Offline
If the carb has been rebuilt in the last 5 years, then you could just replace the jet seals, but if it has been longer or you aren’t sure, then probably best to buy the whole rebuild kit. It’ll save work in the long run.
John

Offline
I'm not familiar with the Moss product; mine came from Joe A. at Alexander Racing. Only one is required. (You may be able to see the ARE logo near the bottom). 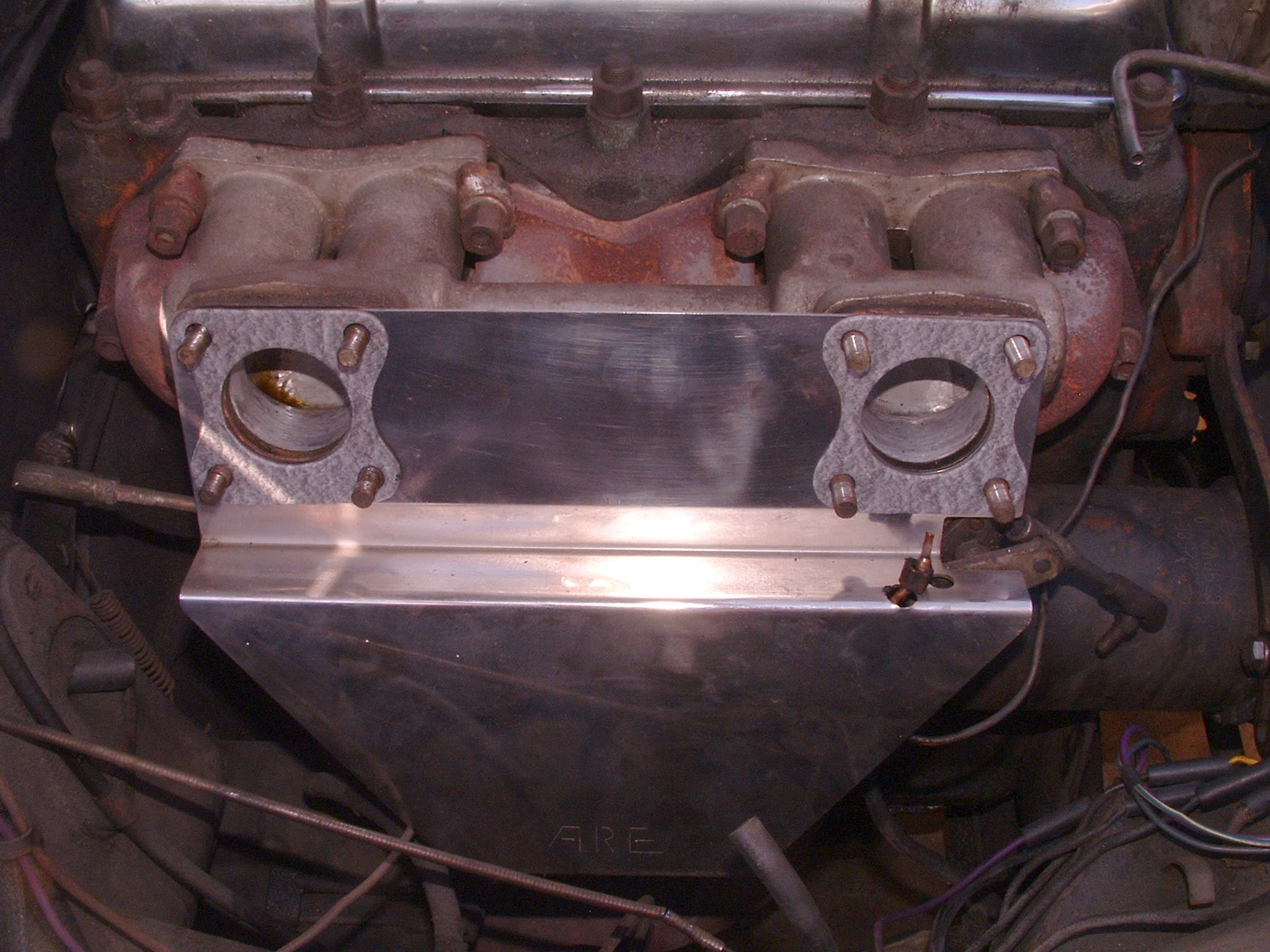 Offline
I don't like these heat shields because they go under the carburetors so they can't be removed without removing the carb.
I made one just like this one (see TR3driver) but with only two bolt holes. It installs over the carb. on the two lower inside bolts.
Much easier to install and remove when needed.

Offline
Not a bad idea, but I've not found that many reasons to have to remove the heat shield. I put it on in 2012 and it's never been off, even to rebuild the starter and generator, and (eventually) convert the generator to an alternator. I even left it in place when I rebuilt the carbs (although obviously the carbs had to come off). 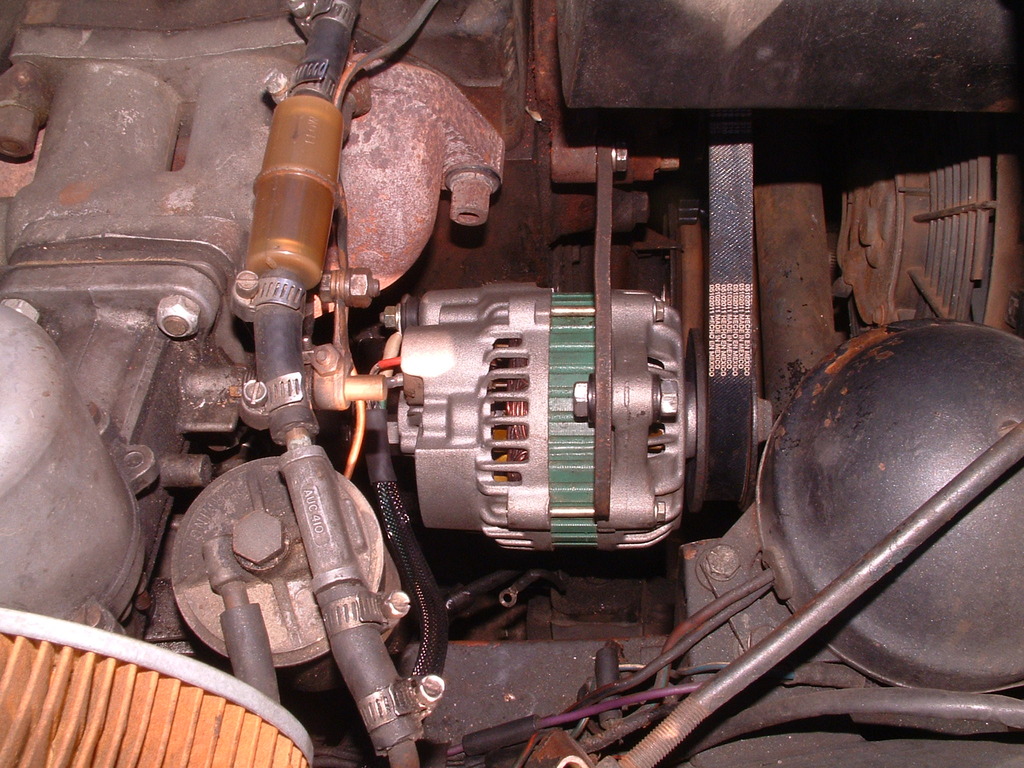 What Alternator have you used? it looks a bit smaller than the one I used. I notice a wire not connected down by the alternator. A ground wire?

Offline
That is a smaller alternator, original application was an 89 Suzuki Swift. Rated 55 amps, but I've seen it put out 60. The smaller size makes it fit the space a lot better than the more common GM alternator. Same belt as the generator, and the belt is actually easier to change! Also made it easier to use a 3-point mount, which I feel is better than the two point mount I was using before.

I made up a new sub-harness from the fuse box area to the alternator; but forgot to remove the old generator harness before taking that photo. The wire you see is the old field connection for the generator. (Earlier TRs, like mine, used ring terminals to the generator instead of quick connects.) I did remove it later.

Have to make a note of that in case my alternator dies.