I'm trying to get my TR6 back on the road after a several year hiatus. This past Saturday I installed a new battery, checked the fluids and started the engine. After a couple attempts it started and sounded normal. Shortly after I was checking the engine compartment and noticed fuel leaking from the front carb. It appeared to be leaking from the bottom of the float chamber. After researching the issue on this forum and finding help from Poolboy and others I removed the bottom plugs in both carbs and replaced the two O-rings with #114 O-rings.

With my fingers crossed I started the TR6 again tonight. Fired right up and sounded good. Checked the engine compartment again and dang - lots of fluid leaking at/near the right bottom of the radiator. I thought the radiator was leaking. Upon further inspection lots of fuel was leaking out of the bottom of the evaporator canister.

I'm not mechanically inclined so I'm thinking this needed repair is way beyond me but hoping someone could help explain what would cause this problem and what has to be done to correct it.

Thanks in advance for your help!!

Mike.
Thanks for sharing your knowledge !!
1975 TR6 mimosa and black

Offline
Good call on the O-ring I had to order 2 new plugs on mine clip broken O-ring dried up carry extra now. As to the canister there is a hose from the top of the gas tank and a vented seal on the filler cap. and a vacuum line to canister. For fume's I do not think you could over fill gas tank because of sleeve at filler so must be coming from intake manifold. I do not have smog reg. so got rid of it when I built the car and plug the tank fitting. and removed wires 1973 TR6 Try this remove one at a time see if fuel comes out the, vented cap and fuel should not make pos pressure Removing vac line will make idle run different. As the car has not ben driven float may be stuck open flooding intake. Add a can of SEA FOAM to tank Auto parts store you may heave to service carbs floats could also have hole an filled with gas some are brass some are plastic easy fix. you may need to get whole kit for the few parts you need. If from manifold remove line plug fitting and run the SEA FOAM gas tank need not be full To add all S F 10 minites will free up stuck float if not kit must be done. Madflyer caution have a fire ex ready

Online
That gas got into the Carbon Canister thru the hose connecting it to the float chamber vent for the Anti Run-on Valve.
There is a problem within the float chamber (floats, needle valve) that's allowing fuel to continue to fill the float chamber beyond full with every stroke of the fuel pump.
If you don't want to fool with the carbs yourself and if you'd like me rebuild and adjust your carbs send me a PM for details.
I do offer a ZS carb rebuilding service for fellow TR6/250 owners.
Ken @
kencorsaw "at" aol.com
DRIVE 'EM IF YOU GOT 'EM
P

Offline
Only one time in 22 years I had some fuel dripping from front carb. I hit the float chamber with a plastic hammer a couple of times - end of problem and its never returned. Try that before taking the carb apart.

Online
Mike, the OP, I think it would be a good idea to pull your oil level dipstick and see if you smell gasoline in the oil...
If there was enough gas pumped into the Carbon Canister from the carbs, there could have been enough drain down the intake manifold into the sump diluting and contaminating the motor oil....Change it and the filter if you find it so.
Ken @
kencorsaw "at" aol.com
DRIVE 'EM IF YOU GOT 'EM
J

Offline
Another question....Can you cap off those vents to the carbon canister? 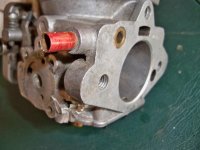 Offline
So I don't have a canister anymore so could I run a line and just have it vent? Right now they are capped.

Online
Yes, just be careful where the hoses end up...the exhaust manifold is below and you wouldn't want to have a mishap if the carbs should flood...Of course gas dripping could happen under a variety of situations
Ken @
kencorsaw "at" aol.com
DRIVE 'EM IF YOU GOT 'EM

JWDH said:
So I don't have a canister anymore so could I run a line and just have it vent? Right now they are capped.
Click to expand...

My Healey float bowls vent to the atmosphere with lines hanging straight down to the bottom of the frame rails. The Healey drains are a few inches from the exhaust manifold. After unsatisfactory results using various plastic and rubber lines, I settled on metal brake line tubing.

Online
Yeah, back before I had a heat shield and when I was trying out Grose jets, the rear carb on my 74 started pulsing out fuel thru the 'red nipple'
Dripped right down on the 'headpipes'....just sizzled but no fire.
I bet we've all seen someone put a cigarette out in a puddle of gas, just to illustrate a point
Ken @
kencorsaw "at" aol.com
DRIVE 'EM IF YOU GOT 'EM
OP
I

Offline
Hi Poolboy, Thanks for your help here. I will DM you.
Thanks for sharing your knowledge !!
1975 TR6 mimosa and black
Similar threads