Offline
Does anyone have a photo of their rear sway bar set up? I bought a used one and I am not sure where the mounting points are and how to attach it. There is no hurry, I won't get to it for a few weeks. Thanks for the help.
Mattdanchris,

Offline
This is a TR3A rather than a TR4, but it might help. The mounting points are the same, but the TR4 uses a different bracket where it attaches to the axle. Instead of kicking down as the TR3 version does, the TR4 version just sticks out to the side.

The instructions said to attach the bar to the axle first, and then hold it up to the frame to mark where to drill the frame. Hope you got the funky U-bolts that go into the frame.

PS, sorry for the cobwebs. This was my daily driver TR3A, after it got wrecked and sat around for awhile.
Randall
56 TR3 TS13571L once and future daily driver
71 Stag LE1473L waiting engine rebuild
71-72-73 Stag LE2013LBW waiting OD gearbox rebuild
OP
M

Offline
Randall,
Thanks for the photo. Stupid questions. Are the frame mounting points in front of the differential, or behind? Where it mounts to the leaf springs, is there a special bracket, or does it just attached to the plate that is already there?
Thanks,
Mattdanchris

Offline
Mine was mounted behind the axle, although I don't recall if that was part of the ADDCO instructions or just where it seemed to fit best.

Yes, there is a special bracket where it fastens to the springs. As I recall, the TR4 version was just a flat steel plate with two holes drilled in it. That's what they sent me at first, but my TR3A has the springs closer to the frame than a TR4 does, so there was not room for the end links between the spring and frame. So they sent me the bracket that is kind of visible above, that kicks down so the end link goes below the spring rather than beside it. Anyway, to install the bracket, you have to remove one of the U-bolt nuts, slide the bracket onto the U-bolt and reinstall the nut.

The end links should run fairly close to vertical with the suspension loaded. That shot was taken after the car was wrecked, which knocked things out of alignment to some extent.
Randall
56 TR3 TS13571L once and future daily driver
71 Stag LE1473L waiting engine rebuild
71-72-73 Stag LE2013LBW waiting OD gearbox rebuild

Offline
Just a thought, assuming you have an ADDCO bar like mine, you might try contacting ADDCO and asking for a copy of the installation instructions. They seemed very helpful when I did mine, although that was a long time ago.

Offline
Had one on my 63 tr4. You have the right info already, just wanted to caution you to test the car in an autoX or large parking lot. Originally I used the supplied rubber bushings, I really can't say that the bar did much at all. I switched to poly bushings, car got dangerously tail happy. I removed the bar.
ex spec5 Mark

Offline
I have the installation instructions. let me know if Addco can't supply them and if you send me your fax number, I'll send them to you.
You do have an Addco bar on the front, yes?
Bob
Bob Muzio
'62 Triumph TR4, '63 Jaguar E-type
VTR SW Region Chapter Coordinator, VP Member Services
Chairperson, Triumphest 2011, 2006, 2001, VTR National/Triumphest 2009

Offline
Not sure if it helps but here is the rear bar on my 3A. 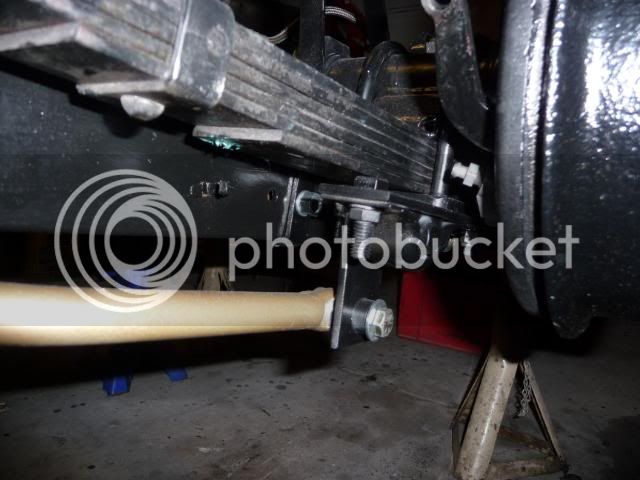 Offline
I don't have a photo. Here are the instructions I received with my ADDCO TR4 rear sway bar (ADDCO 920). Hope it helps you. Tim
btw, I hope your U-bolts are better than the ones I got!

Offline
Interesting, they must have changed the design after I got mine. The bar I got was clearly sized for the end links to run on the inboard side of the TR4 rear springs, not the outboard side.

Offline
Thanks everyone. The installation instructions explain everything. I have TR6 front sway bar now. I got the rear one real cheap, so I am going to install it and see if I like it. I really don't auto X, but I am curious if it will help my torque steer. When I punch it and shift from 1st to 2nd, the car really pulls to the side. It scared me at first, but I'm sort of used to now that I know what to expect. The rear suspension (springs, shocks, bushings etc) are all brand new and tight. How normal is this?
Thanks,
Mattdanchris

mattdanchris said:
When I punch it and shift from 1st to 2nd, the car really pulls to the side. It scared me at first, but I'm sort of used to now that I know what to expect. The rear suspension (springs, shocks, bushings etc) are all brand new and tight. How normal is this?
Click to expand...

Doesn't sound normal at all to me, assuming you're running something close to the original 4 cylinder lump and this is a solid-axle TR4 we're talking about. I shift hard enough on occasion to chirp the tires, and torque steer just isn't something I think about. My FWD Chevy had far more torque steer than any of my TRs ever thought about having.

Well, except for the one where the front suspension was broken loose from the frame; but it also pulled drastically when stepping on the brakes.
Randall
56 TR3 TS13571L once and future daily driver
71 Stag LE1473L waiting engine rebuild
71-72-73 Stag LE2013LBW waiting OD gearbox rebuild
OP
M

Offline
The head is ported bit and I have 87mm pistons, but that is not giving me a lot more HP. If it is not normal, any ideas on what it could be?
Thanks,

Offline
A rear bar is not going to fix the problem. My 4 is mildly heated up has wider tires and has never done what you describe. I would be doing a very careful inspection of the rear suspension mounting points, springs, bushings and shackles.
ex spec5 Mark

Offline
is this a TR4A IRS? My TR6 had a problem with the rear drive axles that were not working correctly. They were binding & hard throttle & then letting off would cause the need for large steering corrections. If this is the case, remove the axles & disassemble & clean, regrease.
Similar threads