Offline
I am within about 20-30 hours of finishing my 10 year "minor" restoration of a 59 TR3A. The tires are old and sat flat for part of that time so I will probably be upgrading both the wire wheels and tires soon. I have very limited knowledge in this area so I need help on the following basic questions:

Are the answers to these questions just a matter of personal choice, or are some of them important?

Offline
I put on Dayton 72 spoke 5.6" with tubeless tyres which leaked so now I have tubes in them with the complements of Dayton. They look and drive very nicely. Also have them on my XKE.

Offline
Dayton or Dunlop is a toss-up. Used to be that the Dunlops had quality issues, but according to Hendrix wire wheel, the Dunlops have their ducks in a row now. However, Allen Hendrix did mention to me that their chrome was still not as good as the Daytons. I went painted, so that wasn't an issue. Which way you go is up to you, but chrome wheels have stainless spokes. Their is no "stainless" wheels that I know of.

Stay away from the 48 spoke wheels unless it's just for show. I also went with 72 spoke as I wanted a wider tire on my TR3.

BTW, I opted to have Hendrix Wire Wheel do up my new tires and rims. They mounted the tires, installed the tubes, balanced and shaved the tires. They also re-trued the new wheels to their spec which cuts the run out in half of what the wheel manufactures use. Hendrix isn't a big fan of the tubeless rims because if you re-true the rims, you break the seal. His work isn't cheap, but worth every penny. The results are nothing short of spectacular.
Art
'58 TR3A TS236xxL
'92 Mazda Miata -- Supercharged
'07 Mazda RX-8
'11 Mazda CX-7

Offline
Depends on your budget and what type of driving you are going to do. If its a show car, chrome and tubeless. A nice driver, 60 spoke painted with tubes.

Offline
I don't think you can go too far wrong here -- other than planning on spirited driving on 48-spokes -- so mostly you're asking for opinions.

For TRs I prefer the look of the painted wires. My painted are Dunlops with 14 years of trouble-free service. I like the convenience of no tubes (my Dunlops are tubed) but had to deal with some re-sealing of leaks on my Daytons to make them work. Again, on the TRs, I think 60 spokes look right. I actually enjoy the handling of the original skinny tires, but then I also have a set of alloys I can put on if I want a change.

It's your car so -- though it is good to get opinions -- what you want is the right answer.
M

Offline
Before buying any new wheels, check the condition of the hub splines. Now if you've already replaced with new then you're set. But if you're running originals they might be too worn to use. The splines should, when viewed from the end of the hub, look like an equilateral triangle with the top flattened or cut off. If you run a finger lightly over them you should not feel any sharp edges. If you do then check their shape. It's not unusual with originals to find the tops are sharp and when viewed, they're bent so that one side of each is almost straight up and down. These should at best be run with used wheels in the same approximate condition, not with new wheel as the uneven pressure on the splines will quickly cause the new wheel centers to be damaged. Best practice if either the hub or wheel shows noticable wear is to replace them, as a pair if both show wear.

Offline
Like they said, whatever you like. My preference is 60 spoke painted wires. As long as your spending a bunch of money you may want to give the splines on the hubs a good check. I bought a set on sale for the day I replace my original wheels.
Richard
65 tr4a

TR3driver said:
Will 60 spoke wheels fit into the spare tire well on the later cars? They won't on the early ones ...
Click to expand...

Offline
I went with the 48 spoke painted wheels on my 57. I'm 66 years old and this is what the cars "looked" like when I was a kid. To me, they don't look right with 60s and especially 72s. I had 48 spoke wheels PING PING PING as spokes broke when going down the road. I remember sticking my head out the door cut away to see where the noise was coming from. Keep in mind though, these were $200 cars we were driving back then with Illinois winters under their belts and rusty old wires. And, as teenagers, we were driving these cars quite aggressively to out corner our faster friends with their American muscle.

bnw said:
...as teenagers, we were driving these cars quite aggressively to out corner our faster friends with their American muscle.
Click to expand...

But now I'm on Medicare and my driving habits... well, they haven't changed all that much.

Offline
Here is my 2 cents................... I have been agonizing over putting chrome wires on my 59 TR3A. I currently have painted 60 spokers. The car is black and the chrome wheels would look great, I think. I just had Alan Hendrix set up 4 new tires (Nexens) for me on the painted wires. The difference in the ride was just INCREDIBLE. No more scuttle shake, wiggle in the wheel at 60 mph, just pure plain fun driving. I don't put a lot of miles on the car each year so I did not want to invest in an expensive set that would "time out" before I wore them out. Go with the Nexens if you want an "original" size. Get new wider wheels and tires if you want a more aggresive look and more rubber on the road. Either way, have Alan do them..........you will not regret it !
Gordon
B

Geo Hahn said:
But now I'm on Medicare and my driving habits... well, they haven't changed all that much.
Click to expand...

Same here. However, I've taken my aggression out on two 98 Z3s and one 98 M Roadster. The BMWs are gone, and so is the nice paycheck. I know this will be different, but I also know I won't be disappointed.

Offline
Dayton Wheel goes the extra mile and machines a large chamfer on the inside diameter of the outboard side of there wheels. With this, you can balance your wheels on modern balancers... using a tapered spacer on each side of the wheel. Unless they've changed, Dunlop wheels don't have this feature. Every tire shop I've been to insists that the can balance my Dunlops by locating on the back face of the hub. This is NOT a machined surface and the wheel will not be properly balanced. It's funny, but almost all of my fellow club members don't understand this and seem to be satisfied with shimmy at 55 mph.
I've found a shop in Tampa that still shaves tires. I'm having an old splined adapter (thanks Marv) sleeved and bored to fit on their machine. Call me anal...

Barney has written up a nice alternative, which seems worthwhile (if, for whatever reason, you don't want to ship the wheels to Hendrix every time you buy new tires, which for me is every other year or two).
https://mgaguru.com/mgtech/wheels/wl110a.htm
Randall
56 TR3 TS13571L once and future daily driver
71 Stag LE1473L waiting engine rebuild
71-72-73 Stag LE2013LBW waiting OD gearbox rebuild
S

Offline
I have Dayton 60-spoke chrome wires for the 4 road wheels and a painted 48 spoke for the spare. I just bought 5 165/80R15's for all 5 wheels. As I have a pre-60,001 car, the spare tire compartment is narrow, so the spare has a tube and is kept mostly de-inflated and sits with the valve stem down, as it fits better that way. I have two cans of air in the spare tire compartment. I think that the steering is a little more responsive at slow speed than it was when I had Vredestein 185/80SR15's on the car. They are about $200 each. I bought my new tires at Discount Tire. I paid $70 each, balanced, with warranty. 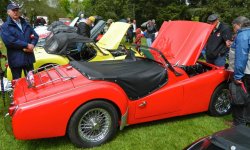 I like the more business like view from the rear of the car. The wider tires give a firmer, more aggressive stance. The size suites the car and fills the wheel arch nicely. Steering at highway speed is direct and positive - very little wandering.
In my opinion the original tires make the car appear tall and fragile. I'm just sayin ...
- Steve
1960 TR3A TS72163-L
It is more fun to drive a slow car fast than to drive a fast car slow. - Abner Perney
J

Offline
So who has the best prices. I've seen the 72 spoke Dayton's on eBay for around $1400. Sorry for my cheapness but is this as good as it gets? I'll need to buy a set this year.

Offline
Richard, thanks for the idea. I'm looking at the Little British Car Co an for the 60 spoke Dunlop's it comes out to about $1219.
Similar threads