Offline
I attended the SVRA season-opener at Sebring last weekend. I had the Elva MK IV and did well, coming in first in Group 1. We were mixed in with group 3 cars which consisted primarily of many 356 Porsches that were an awful lot faster than those I normally encounter at other events.

During the last race I noticed my oil pressure was running low at about 35 psi which is down 10-15 pounds from normal. An inspection of the oil filter shows lots of shiny specs and I suspect my main bearings are shot. This comes at a good time as I have been building up an FWB Coventry Climax (1460 cc) engine to replace the present FWE (1218 cc) motor and I hope to take it to the dyno shop on Wednesday.

A pic from the event is attached.

It appears you were having fun. I battle some pretty fast 356's out west here all the time. Their easy to drive and if you have deep pockets, we have some pretty good tuners in the PNW that make these German bath tubes tough to catch. Good luck this season, the new engine sounds like the perfect upgrade. 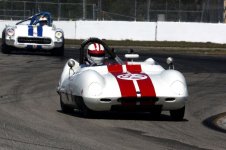 Ever the optimist! Only you could see worn main bearings coming at a good time......

Glad you were able to get down there (I'm jealous!).

See you at Summit!