Offline
Never heard of one before, does such a thing exist? Wouldn't mind owning it, the Harrington coupe body looks gorgeous! Reserve not met at $26K, according to the listing and pictures I saw this one has nothing to do the Tiger Lister coupes built for LeMans and is a one-off build:

Post-script: Just went google searching quickly, ended up at the Tigers United website, didn't find a picture but what seems to be enough information to confirm that this car is the real deal, cool

Offline
Yes, the Harrington LeMans is a rare beast. They only made a few of them, and there were some copies made at some stage, but if it's a genuine one it's worth a few bucks.
My Blog
My Facebook Page
OP

Offline
<blockquote><font size="1" face="Verdana, Arial">quote:</font><hr> Steve said: Yes, the Harrington LeMans is a rare beast. They only made a few of them, and there were some copies made at some stage, but if it's a genuine one it's worth a few bucks.
<hr></blockquote>

You're probably talking specifically about the Harrington coupe based on the Alpine 4-cylinder, which are pretty rare in their own right. I've never seen one in the flesh so far, will I ever? Just add that to the long list of cars I'd love to just get a glimpse of in my lifetime...


Now a Tiger Harrington V8 coupe, that's got to be pretty desireable in my books, if I had the money I'd be in line...
No british car yet... Taking donations
Meanwhile, my camera wish list is growing

Offline
The Harrington Tiger that is advertised is the only Harrington factory tiger.It was refitted by Rootes and is a beautiful Tiger.I did see this car at Suni 1 in 1989.
I believe he is asking $199,000 for it.I don't think he will see that figure but then look at that Jag that was over 1 miilion.
I know my Lister clone is worth a bit but never in that range.
My Tiger is soon to leave home as it is presumed as sold.

But its sunny
Chuck
62 Alpine V6 now a V8
64 Spirit of Lister, 351W V8
Enjoy today as we don't know what tomorrow will bring
OP

Offline
<blockquote><font size="1" face="Verdana, Arial">quote:</font><hr> thegoodbeamer said:
The Harrington Tiger that is advertised is the only Harrington factory tiger.It was refitted by Rootes and is a beautiful Tiger.I did see this car at Suni 1 in 1989.

I believe he is asking $199,000 for it.I don't think he will see that figure but then look at that Jag that was over 1 miilion.
I know my Lister clone is worth a bit but never in that range.
<hr></blockquote>

There's always a problem with how to value a car where only one was ever made, even if officially by the factory. Depending on the car, overall demand may be low and the seller may need to be patient to find just the right buyer.

Anyway, let's hope this one somehow finds a good home that will preserve this one-of-a-kind car.
No british car yet... Taking donations
Meanwhile, my camera wish list is growing

Offline
Based on the serial number the car would have been made around Feburary of 65. The Harrington works were no longer doing conversions as of about a year earlier so it's doubtful that it's as "official" as one of the earlier Alpine based Harringtons. That being said, there's no reason to believe it wasn't done with Harrington parts. They probably were leftovers or removed from a type D, (series 3 or 4 Alpine based), car. The only real question is, would the fact that Harrington couldn't have done the actual conversion be a factor in a purchasers decision?
T

Offline
The harrington tiger as above was an official factory refit and that is where the confusion is happening.Still a beautiful car.Since it is factory and a one of is why some value has been put on it.I guess the owner wants to retire,IMy memory is sadly going but I think his name might of been Bill.
Chuck
62 Alpine V6 now a V8
64 Spirit of Lister, 351W V8
Enjoy today as we don't know what tomorrow will bring

Offline
Info on these cars here:

For What It's Worth, we have a member here at BCF whose last name is "Harrington". He e-mailed me last year (when I posted stuff about these cars)...apparently, he was looking into his family tree to see if he had any relatives involved in the Harrington Company

Offline
As beautiful as that car is I wouldn't want to own it because I'd drive it the way the Good Lord intended sports cars to be driven.
In "Tiger the Making of a Sports Car" there is a picture of the Larry Reed Sports Cars AHRA record holder that has a different but still nice looking type of coupe roof. So there must be some Harrington or other aftermarket Le Mans style Tigers out there that would be cheaper to own and wouldn't make me feel guilty driving it at full chat.
xb,
Chris
T

Offline
Hallo,
I really like this car, but is it original?
The thing that makes me unsteady are the badges on the wings.
Why do I read "Powered by Ford 260"?
As it is RHD, this car is for the Great Britian Market, I think.
But then, mustnt there be a Badge with "Alpine 260"?
I am not shoure, but I think there is something wrong.

Offline
Hi
I've found a link to what I believe to be the Harrington tiger in Motorsport magazine dated 23 June 1967, albeit in the small ads.
The seller claims to have a 1965 Le Mans Tiger fastback converted by Harringtons of Shoreham, cost new was over £2000, finished in indigo blue with a light blue interior. 17000 miles with a new set of Pirelli tyres fitted. His final claim was that there was only 3 of these cars ever converted.

It has been suggested to me that this was one of the 64 Le Mans Lister tigers / tiger mule, while I respect everyones views I would have thought someone selling an historic Le Mans car would have advertised it as exactly that.

DUU550C has a genuine Harrington roof, colours match, registration dates match, so if there is one that still exists, couldn't there conceivably been three converted.
I would have also thought the seller from Brighton would have known about Harringtons, selling his two year old car in the home town of Harrington conversions.
One of the big problems everyone has with this car is by 1965 Harringtons no longer existed and couldn't possibly have done this conversion, was it done by ex Harrington employees, Robbins and Day or even Rootes engineers back at Coventry, where it was coincidently first registered?

Offline
The Harrington tiger is indeed indigo blue.The owner is in Sacramento.See more discussion at [sunbeamalpine.org]forum"the holy grail"It is the only factory harrington tiger.
There were 3 Lister Tigers.The prototype that was shown.It was rebodied after the other 2 were done.The other 2 both ran at 64 Lemans but never finished due to lack of time and development.They are called Lister as Brian Lister of Jaquar fame did the body and was well involved. It was aluminum from the front fenders back.He wanted to do a tube frame and all the fancy stuff that was current back then.Lord Rootes said no as he wanted people to see what a tiger was and be able to go in the showroom and buy one after they won Lemans.Talk about optmisum.
The listers were able to do a 165 MPH on the straight but just too heavy to keep up on the curves.Not bad for a so called race prepared 260 Ford V8.Shelby sold Rootes these engines but put the 289s in his Daytona Cobras.

and its sunny
Chuck
62 Alpine V6 now a V8
64 Spirit of Lister, 351W V8
Enjoy today as we don't know what tomorrow will bring
OP

Interesting discussion over there, must say I learned a lot.

This Harrington Tiger is certainly a very interesting car which deserves some more research. If proven to be authentic (which I gather it basically is anyway) it is a nice piece of Rootes Group history.

Almost reminds me of one other unique Rootes Group car... from what I recall a very small number of Humber Super Snipes were fitted with a Chrysler V8 as prototypes, after the Chrysler takeover of the company. And I believe one or two of these still exist
No british car yet... Taking donations
Meanwhile, my camera wish list is growing

Offline
sherlock.
Yes they do and at Suni 2 at Lake Geneva Winsconsin one indeed show up.It seemed a natural with the 383 sitting in the compartment.The super snipe was a big car in the first place.Nice piece of history.
Also here in town there is Humber snipe shooting brake.Second owner.He has come out a couple of times.Now that should be right up there with the kind of stuff you like.If he ever offers it to me I just might buy that one.I just might have the money as I sold the 65 Tiger and he will pick it up in May.Sad to see this but it was the only one that I would let go.Maybe he will back out and I 'll get the car and deposit.Just kidding as I know him and he is excited like a 5 year old waiting for christmas.Its going to Toronto.

Offline
It's a shame Chrysler didn't have deeper pockets at the time they owned Rootes. There were many promising models on the drawing boards in the 60s that never made it to the showroom for lack of funds. My personal favourite was the Asp sports car, smaller than an Alpine, intended to go head to head with Spridget and Spitfire.

If the funds had been there for investment Humber and Sunbeam might still exist today. Instead Chrysler slashed costs, failed to produce interesting models (competitions department specials like the Sunbeam Lotus aside) and the whole lot wound up in the skip.
'63 Sunbeam Alpine
'69 Sunbeam Imp Sport
C

Offline
Hi Everyone
Norman has comfirmed there was only ever one Harrington in Jensens records, so I guess this was just a dealers tall tale to sell his car giving everyone the impression it was on par with one of the 64 Le Mans cars, something we all know never went near the Shoreham factory.

Offline
The Harrington has been relisted. The reserve has still not been met ($52,100 last time I looked).
It comes in pints?! I'm getting one!
Present:
99 Jeep Wrangler
Past:
84 Jeep CJ
81 Ford Fiesta
W

Offline
Just thought I would add that I am the BCF Harrington.To date we have found no connection to the Company, however I believe the English spelling would normally be Herrington , not the Irish Harrington, so we are still investigating.

Offline
according to the information i have there was never an tiger harrington built, but since there are also rumours once one Sunbeam Venezia Tiger was built for the son of Lord Rootes, maybe ???
Anyway i am 99 % sure it was changed later (anyway the changes are the same like making an Alger)
Lutz from Munich/Germany
sunbeam@spymac.com
owner of
only (?)automatic alpine in Europe
and
a "normal" Sunbeam Alpine MKIV with Overdrive
OP

Resurrecting a very old thread... Guess what I spotted here in Calgary today, the same Tiger Harrington being discussed here... Actually found this thread via a web search... The owner here says he purchased the car eight years ago (the math seems to be right), apparently this is the first show he has ever had the car at since he has owned it, but did tell me that he drives it around often... Pictures of course... And Chuck I did tell him about your Lister replica, he seemed quite interested about it... 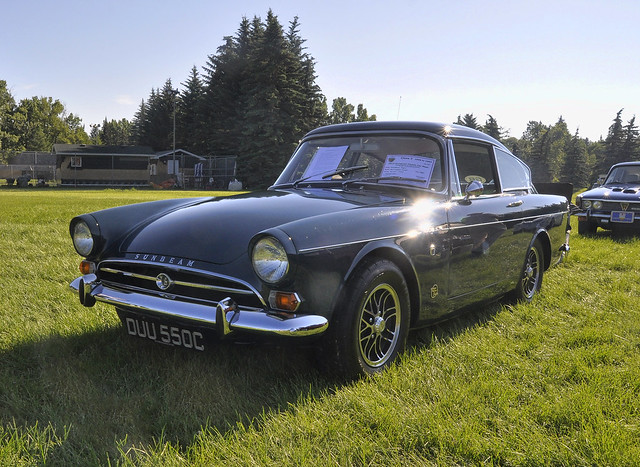 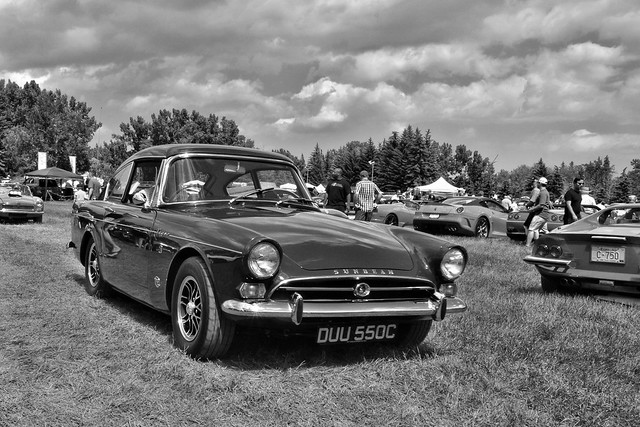 No british car yet... Taking donations
Meanwhile, my camera wish list is growing