Offline
I'm down to *only* Brit race cars now.

I've been trying to sell my Escort NASA racer for a while now, but have had very little interest. But in the past two weeks, I've had many, many inquiries.

Not that it mattered.

I had promised my old pal (and former 24 Hours or Lemons team-mate) Colin that he could use the car for his NASA competition license school.
I also told him I'd sell it as soon as he was done with it.
After he spent a little time with it last week, I guess he figured out it really was a good deal.
So he bought it.

Colin runs a race-shop but he is so busy with customer cars that he hasn't had the time to build his own car (he's wanted to do it for the last few years).
He just called to tell me the car ran perfectly and he was able to get his racing license using the car at the weekend NASA race school at Pocono.

He also told me he was really surprised at how fast the car is
(I'd been trying to tell him that for a while....but you can't tell these kids anything).

Anyway, I feel a lot better......I hate the idea of selling a used race car to a friend and then seeing it fall apart.

I may end up driving the Escort again (in an enduro), but either way, I'm delighted that it'll see good use.

The money from the sale will go towards a bunch of race parts for the A-35. I've already put an order in with Jegs and Summit.

Now back to working on these British cars.....

Offline
Great, lets get that A35 going.

Right now, I'm getting Green 909 ready for ~THIS~
(I'm already registered and paid up).

Offline
Looks like fun, would that be a peugeot or a porsche

Offline
Ha ha! Only if it was ~This Peugeot~


I drove a racing 996 last year, but honestly ~This~ is my favourite Porker.

Nial, I love your taste in cars
I would give up the fleet for one of those little cars

I am thinking a Denzel

No, they're all cool, but I like the Abarth coupes the best

Mark Doust, on these boards, who has a Midget and a Big Healey etc. also has an Abarth

Offline
Michael:
Yes! See you at the Jefferson 500.
After a long Winter of withdrawal, I'm mad to get back on the track.
At this point, I'd be happy to race a vintage pogo stick. :laugh:

They did some pretty nice Simca-Abarths that sorta looked similar too (below); 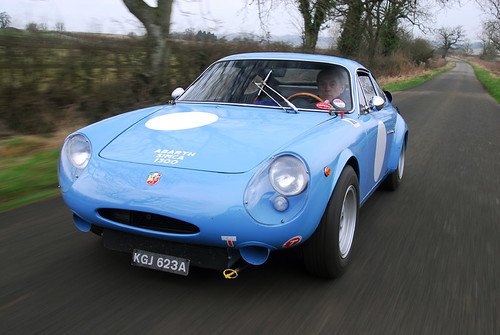 I wanted to chase that Escort in my Pinto :laugh:

Offline
Wasn't there a Cyclops-Abarth? I can't find an image of one anywhere but here's a contemporary shot of the standard single-bubble model.

Offline
No Michael, I think that's the Pinto prototype!

aeronca65t said:
No Michael, I think that's the Pinto prototype!

Sure...It's all fun and games until you go a lap with a Pinto grill filling your rear view mirror...

(A Pinto with dents all over it
)

Offline
Wasn't there a Cyclops-Abarth? Maybe this rare Abarth you where thinking of.

Offline
Sort of from the school of ~ALFA Disco Volate~ -styling.

Offline
I saw this car at VIR today (VDCA Wild Hare Race)--it is a Renault Alpina and reminded me of the elegant little Simca on gaullic steroids.

The second pic is of the very rare Elva-Segway special.