Offline
When I converted the front drum brakes to disc brakes, I dutifully changed the master cylinder and rear brakes to the later style from an MG Midget as recommended (see here). After reassembling the rear brakes, I found that the hubs were rubbing on the backing plates. At the time I temporarily solved the problem by adding a washer acting as a spacer between the axle and the hub, thus spacing the hubs outward a fraction of an inch.

Today I disassembled the rear brakes and took some measurements. It turns out that the original Bugeye backing plates are different from those fitted on later model MG Midgets. First, the outside diameter of the Midget's plates is greater, but that doesn't create any problems. The problem is the thickness of the flange on the backing plate that is used to mount it to the axle housing. I've attached a drawing to illustrate the problem. If anyone has changed their rear brake backing plates to the later model MG Midgets and made it work, please let me know what you did.

For example, does anyone know if the rear hubs on the later model Midget is different? 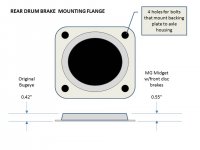 'Sorry. I should have been more clear. Clearance between the drum and the backing plate are not the problem I was trying to describe. I too had to have some material removed from the edge of the drums. My drums are no longer rubbing against the backing plates.

Since apparently neither of you experienced this problem, I suspect there may be differences among backing plates from different years of the later model Midgets. I checked the online catalog of Moss Europe, and found the following listings for rear backing plates:

I think the above two (same part number) are for the Bugeye, and the next two are for later model Midgets.

Can someone translate this into model years?

Offline
Dan,
Some hubs are machined a little deeper and they make contact with the brake cylinder, but I've not had one contact the backing plate except when the hole in the backing plate was not round. A die grinder or rat tail file should give you the clearance you need.
Rut
Rut, '60 Bugeye, '70 MGB, '62 TR4, '66 TR4a IRS, '67 TR4a IRS, '68 TR4a IRS, '72 TR6


Rut said:
Some hubs are machined a little deeper and they make contact with the brake cylinder, but I've not had one contact the backing plate except when the hole in the backing plate was not round. A die grinder or rat tail file should give you the clearance you need.
Rut
Click to expand...

I was thinking about your suggestion of grinding the excess material off the hub, but then I remembered that it's in (I think) a difficult place to grind. It's the surface pointed to in the figure below by the yellow arrow that rubs against the flange on the backing plate. How difficult would it be for a machine shop to do that? 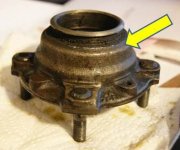 Offline
I changed to the later brake backing plate as well and don't remember exactly what I did. Do remember having interference at that point and I believe I releaved the backing plate rather than the hub. Also had a bit turned off the brake drum.


nomad said:
I changed to the later brake backing plate as well and don't remember exactly what I did. Do remember having interference at that point and I believe I releaved the backing plate rather than the hub. Also had a bit turned off the brake drum.
Click to expand...

My experience exactly. I ground off some of the material from the mounting flange on the backing plate (as well as the drums), but I finally put a washer between the axle housing and the hub to space the hub a little bit more away from the flange. Not an ideal solution to be sure, and I'd like to go back and do it all over. I didn't like the mess I made of the backing plates and have never been comfortable with how the hub are spaced out by the washers since the axle nut no longer engages as many threads as before. If it's possible to solve all of this by having a machine shop relieve some of the material on the hubs, I'll get some new backing plates and do it right.


Rut said:
Dan,
I ground the inside of the backing plate, not the hub. If you continue to have issues you may have a 'large' hub and a 'small' backing plate hole as far as specs go. Let me know if you need an extra set if hubs, I think I have a few around.
Rut
Click to expand...

Is there an easy way to tell which I have?


Rut said:
They are all considered 'normal' size, just match up with a little rub. Clamp the plate in a vise and make sure the hole is round and adjust it to fit the hub. I've used everything from a tack hammer to a file to relieve that area.
Click to expand...

'Sorry, 'thought you meant that there were two different size hubs. :shame: So, it sounds like what people have done is only to relieve the backing plate, not the hub. That's what I did, but perhaps my mistake was to try to reduce the extent to which it protrudes rather than to make the round opening larger.

Guess I need to consider what I want to do next before jumping in again.