My dad had a '57 100-6 when I was growing up in England. I have great memories of going for rides with my dad on the occasional perfect, sunny day with no chance of rain. We'd roar around the windy, hilly single tracks roads and I'd have a huge smile on my face. I spent many evenings out in the garage tinkering on the Healey with him. Dad sold the Healey when he and mom moved back to the US, and he bought this Healey many years later (about 8-9 years ago I think). I have 3 small children, and they all love going for rides in the '63 BJ7 around the neighborhood. Hopefully they'll have fond memories of the rides like I do with my dad.


However, the Healey does have some issues, which is why I'm posting. The biggest is the very hard starting when cold. Dad had the carbs rebuilt by a "Healey carb guru" in Florida before he passed. The carbs were rebuilt and sitting on his workbench when I installed them. The Healey started and ran in Florida, so I thought everything was good. But, once the car got to me in Virginia in the winter, she did NOT want to start. I found that the enricher/jet holder on the rear carb was frozen and will not move. So I can only choke the front carb and use generous amount of ether to start her. It then takes a looong time before she will idle happily on her own without being babied. Once warm she idles OK, but not great. If I back the idle down to 5-600 she will barely stay running. Also, the idle sounds a bit "rough". Not like an entire cylinder is dropping out, but not as smooth as it should be. I have a '99 BMW E36 M3 convertible with a 3.2L straight six, and the M3's idle is much smoother.


The other issue is that the engine doesn't want to rev out freely. I don't think I've had the engine much over 3,000 rpm because it just doesn't seem happy. And it doesn't sound quite right (compared to my memories of the 100-6 as a kid), either. The exhaust note just doesn't sound "clean", if that makes sense? I'm guessing both issues have something to do with the enricher/jet holder on the rear carb, but that's only a guess.


Can I do anything about the rear carb with it installed? I'm 6'-3" and don't have dainty hands, so getting the nuts and washers on under the carbs is a real chore, so I'd like to avoid pulling the carb(s) again if I can. I've tinkered with SU's before on dad's old Healey and on his daily driver for 17 years, his 1970 MGB-GT, but it's been a long, long time ago. I've tuned (re-jetted and re-needled) the Mikuni carbs on my modified RZ350 (RD350LC YPVS to any Brits reading), but that was 10 years ago also.


On to the pics. I took these a few days ago after the Healey had sat for probably 2 years. My youngest daughter had never even been for a ride, and the weather was cooling off where you didn't get cooked so badly from the heat of the engine/exhaust, so I decided to get her running again and take the kids out. I knocked the layer of dust off with some quick detailer, but did not wash her. She will look even better with a fresh coat of wax 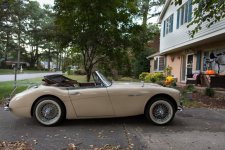 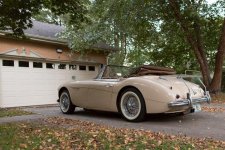 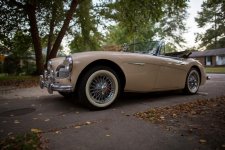 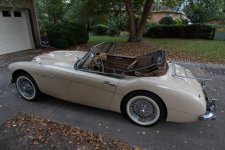 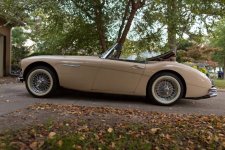 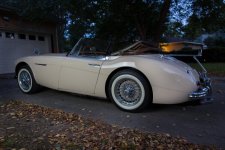 Larger resolution images can be found in the following links:


Thanks in advance for any suggestions on the carb(s)/not smooth idling and driving issue.

Offline
I live in a warmer climate (Southern Calif) but experienced a similar problem on my HD8s. The rear jet would stick in the down position - so the car was choked on the rear carb all the time. This made it run quite rough.

For starters, I'd take off the carb domes and pistons (keeping pistons with their domes). Clean everything out with carb cleaner. Attempt to free the jet bearing-choke mechanism. PB blaster or Kroil could help here. You can do this without fiddling underneath the carbs.
Steve Gerow
Altadena, CA, USA
1959 AH BN6 2-seat roadster / 1974 TR6 Emerald Green
Check out my galleries:
http://www.pbase.com/stevegerow

Offline
I also have a BJ7 and have suffered similar problems.

I agree with Steveg, use carb cleaner on everything and dose the frozen choke mechanism daily with PB Blaster or similar and try moving it on a daily basis at the same time, eventually it should come free.

With regards to the running and bad starting of the engine, there could be a couple of reasons apart from the frozen choke.

1. If you are still running the HS6 carbs, there are feeds from the bottom of the float chambers to the jets that rely on rubber seals and compression nuts to make a seal at the float chambers. In my experience of similar problems to you, ( my car would not exceed 60MPH) I have found that the rubber seal on one carb had collapsed partially sealing the line.
To check this and to do the job properly you are going to have to take those carbs off.

2. Bad cold starting and general idling - again in my experience with such problems, timing was the initial issue as well as carb tuning. So it is imperative that those feeds are checked out first, then go to the timing.

3. In addition to the timing I have had to sort out the distributer - as the moving advance plate holding the points and the condenser was rotated, the earth wire came out of the end connection. The low tension wire to the points was poorly insulated, and had to be replaced. The moving plate is clamped to the fixed plate by a star clamp underneath, one of the three legs of the star had broken off causing the moving plate to wobble when pushed from the top and lastly, the pin holding the vacuum advance mechanism to the moving plate operating arm had worn.

Once the above had been attended to, the car idled at 750 revs with no problem at all.

Offline
Nice to see a new Healey in Tidewater. I'm with the local Healey club TACH, but not very close to you. There are members around that can help sort out your Healey's problems. Also in VB is "Abacus Racing" which is experienced with Healeys and could solve any issue, at a price of course.

Offline
Find someone to take the carbs off and clean them ,get a new dist cap and rotor new points and condenser its not that expensive

Offline
Nothing to add to the above suggestions, just chiming in to say the car looks great. It seems funny to see a car with wide whitewalls now, since most everyone runs blackwalls. But in period, lots of Healeys had them.
Rick
"Madman in a death machine" My Nasty Boy Build: > BritishV8 Forum: "The Exploder" - HealeyRick's Austin-Healey BJ7 w/ Ford 5.0 <
OP
B

Offline
Thanks everyone, I’ll try some penetrating fluid on the carbs first.

Bob, I would assume (never a good thing) that the hoses would have been replaced, or at least inspected, when the carbs were rebuilt. I will not rule that out though. The ignition system is not stock; it’s a Crane Fireball XR700 electronic ignition and PS40 coil (looking at the external components). I have not pulled the cap to look in the distributor however, but I don’t know how much adjustability there is in the system. Guess I should download the manual and read up on it.

John;rjc, no-one works on my cars but me . I’ve done engine swaps, trans swaps, replaced every bushing (suspension/diff/rack/subframe) in a couple cars, done a turbo conversion to my Z32 300ZX, etc. I don’t even let someone touch my car for tires; I bring the wheels and new tires to the shop. Alignment and state inspection are the only reason anyone has touched a vehicle of mine in 15+ years, no plan on that changing anytime soon. I’m just trying to avoid pulling the carbs if I can as I know the car will be down for a while if I do as I have very limited time with 3 kids 7 and under and a wife. Plus the Z is DOA right now, and the Jag is throwing an intermittent “restricted performance” code and may need my undivided attention at any moment. However, I’d love it if I could meet up with someone in the area who knew if the car sounds off. I emailed someone before about some Healey parts on CL and he mentioned the TACH club, but I couldn’t find any contact info online. Could you PM me some info, please?

Offline
Beady, you have a PM of the TACH officers taken from the AHCA website.
Bob McElwee
'62 AH Tri-Carb(sold)
Miss BT
OP
B

Bob McElwee said:
Beady, you have a PM of the TACH officers taken from the AHCA website.
Click to expand...

Offline
With the engine running at as stable an Idle as you can get take a can of light oil . transmission fluid should do it and use it in an oil can and lube the throttle shafts while its running .
If the idle smooths out when you oil them then that's your problem , worn throttle shafts and they are sucking air giving you a rough idle ,
Clean the dampers etc first but this is a good test after you have eliminated damper /dashpot issues .
"If it aint broke ....dont fix it "
" Thats not an oil leak ..........its a special automatic British rustproofing system "
Best Healey in show ABCD Ottawa 2013
Best Healey in Show Boot n Bonnet Kingston 2013
OP
B

Offline
Alright, I did a bunch of reading on rebuilding/tuning/synching the SU’s/HS6’s and have come to the conclusion there is no easy fix here. I’m just going to have to figure out what is wrong with the rear jet holder not moving, and then dial the carbs in from scratch and synchronize them. No matter how good the guru may have been who rebuilt the carbs, he wouldn’t have been able to set them for the condition of this particular engine. Cam wear, valve clearances, compression numbers, etc.

The car being an absolute bear to start when cold leads me to think the jet holder is probably stuck in the up (or relatively high) position causing a very lean mixture on cold starting and causing the difficulty.

Guess I’ll just have to make some time to work on the carbs.