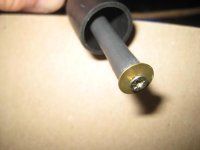 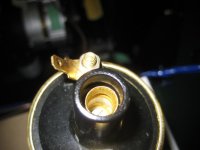 I have a Lucas sport coil with a push-on style lead connector. Recently I purchased a set of Lucas ignition leads (very flexible graphite leads that are hollow in the center. The lead to be terminated to the coil came with a small brass disc or washer attached to the lead end with a small brass screw installed axially in the end of the lead. It will not fit into the coil connector. The disc diameter is larger than the diameter of the coil connector entry.


What am I doing wrong? Is the disc a temporary part that should be removed and replaced by something else? Sadly I do not have the original lead for comparison.

Offline
The disk and screw are there for a much, much older coil design. In the late '50s early '60x Lucas coils had a screw on center terminal. You would remove the coil's threaded center post, feed the new cable through the removed post/nut, fish the plug wire's center conductor through the washer, fold the conductor over, and insert the screw. THEN you would refit the coil's center terminal by threading it into the coil with the plug wire.

What you need is a crimp-on terminal. If you are replacing an old set of plug wires, remove one of the distributor cap end terminals from one of those old wires. Strip back your new cable a little bit, fold the center conductor over against the outer wall of the plug wire jacket, then use pliers to re-crimp the terminal from the old plug wire onto the new one. Make sure the terminal is crimped over the wire's center conductor so they are touching. Don't forget to put a rubber boot on the cable before crimping the terminal in place.
Doug L.
'64 Morris Mini Cooper-S 1275
'67 Triumph GT6 Mk1
OP
M

First, thanks for the reply plus a correction. The center of the lead is not hollow as I said previously. The core looks like graphite, no metal wire. See photo.

I don't have the original lead to the coil, must have discarded. The crimped ends on the spark plus leads are too small in diameter to fit securely into the coil connector. I removed one of the crimped ends anyway and found that a short length of brass or gold wire had been inserted into the graphite core then folded back with some of the graphite impregnated cord over the outside of the lead and the brass end crimped over everything.

Do I need to find a larger diameter crimped end? Neither Moss or VB seem to sell these ends for crimping separately.

This is what you need. This kit is enough for two cars. Advance Auto, Car Quest or what ever. It is red with solid core. Think about 12 bucks as I remember.
Jack Laird, Retired USAF
Bugeye, Miss Agatha. Fourteen shows, Eleven firsts.
Bee, MGB V6, auto tranny.

Offline
Generally with the graphite core the jacket is removed and a length of the graphite is folded back under the crimp. The wire insert you found will serve the same function. NAPA used to sell supplies to make your own plug wires so you may want to check there (or eBay) for terminals. I am surprised that the terminals you found on the old plug wires are not the same size as what you need for the coil. If the issue is how "spread out" the terminal fingers are below the crimp, could you not open them up a bit with pliers to get contact with the coil terminal?

The picture below (found on the net) shows the carbon fiber folded back prior to attaching the terminal. The terminal has little "fingers" that would go into the dizzy cap. Those are the features I was wondering if you couldn't open up a bit to fit the coil. 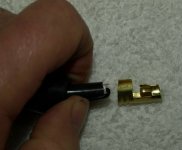 Offline
Yes, that is the part that I need. The crimp portion of the distributor end and the coil end is the same but the coil part is much longer to provide the barrel that enters into the coil plus the spring finger that locks into the groove in the coil. I will check out NAPA. There are several suppliers in the UK that sell the part but hard to find in North America.
Thanks,
Paul
N

Offline
Can you salvage the end off your old one?? Usually you can pry them off with a screw driver.

mcd said:
...but the coil part is much longer to provide the barrel that enters into the coil plus the spring finger that locks into the groove in the coil.
Click to expand...

While some say that length matters... in this case I don't think it does. As long as the springy fingers on the wire terminal can grip the metal cup in the coil's high-tension terminal that is all that you need. You should be able to re-use an old wire terminal as Kurt and I mentioned by just stuffing the wire deeper into the coil than say you would on a distributor cap.
Doug L.
'64 Morris Mini Cooper-S 1275
'67 Triumph GT6 Mk1
OP
M

Offline
I'll have another look.
I still can't believe that a large British car parts supplier would sell an un-terminated coil lead end and not sell the proper crimp terminal. They sell the old srew terminal option but not the push-in option. In fact neither of the 2 big ones do. But the one that also operates in the UK sells the part over there!!

Offline
A lot of parts are made for use in collector cars so it is not really that surprising that if (for example) you ordered a spark plug wire set for the particular year of your car the plug wires would come with the terminals that would be "correct" for your car when new as opposed to terminals correct for a modern Lucas sports coil.

I am sure you have a preferred local parts store that is part of a national chain. Google the store name and "spark plug wire terminals". You will get some hits. As an example, I arbitrarily Googled using O'Reilly and came up with BWD brand terminals CT500 and CT504. Some store web site will allow you to search local inventory for parts like this. Since you are in Canada I looked at the Canadian NAPA web site and found part numbers 727008 & 727003 that may work for you.
Doug L.
'64 Morris Mini Cooper-S 1275
'67 Triumph GT6 Mk1
OP
M

Offline
Got the part this morning at a local auto parts store. Good to go.
Thanks for all the help.
Paul
Similar threads