Offline
From 1996 through 2001, I owned this 1985 FJ-60 Land Cruiser. It was the first stickshift vehicle I had ever driven and owned, and boy, those throws between the gears were long! I used to refer to it as a "UV" versus an "SUV", since there was nothing sporty about it. They had to have manual transmissions in these vehicles, or else one would die of boredom while waiting for it to get up to 60 mph. But, when the roads were snow covered, or when it was taken off road, it was absolutely in its element. 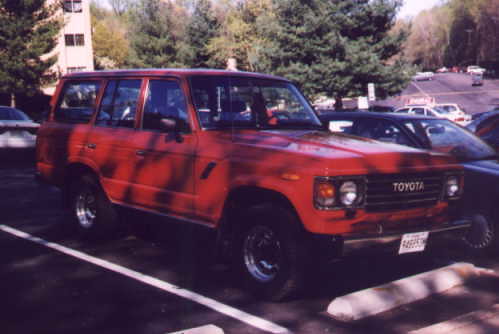 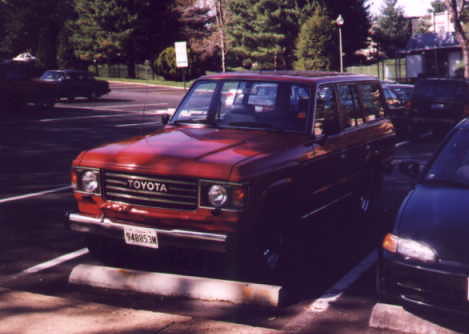 Ultimately, it's copious appetite for premium gas (11 - 14 mpg) and the Land Cruiser's semi-exotic nature of getting spare parts for it did it in for me as a daily driver. At this point, I was still living in my condo and had no means of working on the vehicle myself. I ended up replacing it with a 1999 Toyota 4Runner, which was one of the best vehicles I ever owned. It wasn't as good off road as the Land Cruiser, but it was a better day-to-day vehicle.

I had seen it as recently as a few years ago still in the area. There are times that I definitely miss it. Until I bought the '69 Sprite, this was probably the "coolest" vehicle I had owned.
1969 Austin Healey Sprite Mark IV - "Baby Blue" or "B.B."
1953 Plymouth Cranbrook - "Gertrude"

Land Cruisers are seriously nice machines. I've had two different FJ40s (both '76 models). Was close to picking up a FJ60 a couple years ago, would have needed to be a daily driver for a few years so I eventually decided against it. I've still got a soft spot for them.

My first '76 FJ40, a rusty POS that I absolutely loved -- the first vehicle I ever owned just because it was fun. 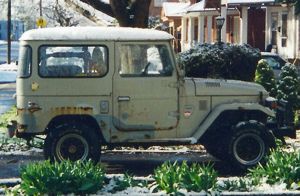 I owned this one briefly a couple years ago. Was going to be my daily driver for a year or two before being retired to fun duty. Decided that it wasn't the best plan and sold it on a few months after buying it -- was just too nice to be subjected to our salty winters. Wish I had the resources to have kept it, but it just wasn't to be. 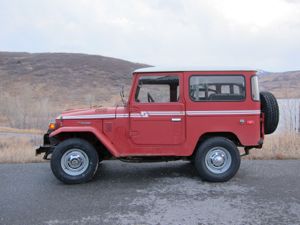 Offline
The 2F Motor had such nice torque characteristics -- a good deal of grunt down low and then a pretty flat torque curve. It was a very pleasant vehicle to drive, so long as you weren't in too much of a hurry. I know there are folks that make Chevotas out of the LandCruisers by putting 350 V-8s in them. While the 350 definitely moves them, you lose the charm and character of these vehicles. For my money, they were the best 4x4s out there: Better traction and handling characteristics than Jeeps and infinitely more reliable than Land Rovers.
1969 Austin Healey Sprite Mark IV - "Baby Blue" or "B.B."
1953 Plymouth Cranbrook - "Gertrude"

Offline
We true believers of the Legends call those Chevy powered deals toylets. Give me the old tractor motor.
Gobs of torque available just off idle. Nothing chugs and slugs along like an old Cruiser. I'd know that sound for a half mile away.
For decades I maintained a stable of 3. Gundy( bench seat, 3 speed, F forever) the 72 fj40, Big(light armored personnel
carrier), the 83 FJ 60, and The Coach, a 96 FZJ80.
The 40 was all tricked out for crawling and trekking. The State once called me to drag surveyor crews through 33K acres
of wilderness area. The @eeps we're getting stuck and busted up. We forded rivers, climbed to the tops of mountains without roads and even blazed trails with chainsaws. Those dudes were in AWE of the 40s as I had enlisted a friend
with a capable 40 to go along.
I sold it recently after owning it for over 30 years. A friend just offered to much dough. I still have dibs before any
future sale.
The 60 is a rust bucket that is tricked a bit mechanically and outfitted with sliders etc .
It's going to another friend who owns a Cruiserhead shop in a labor trade on the FZJ80.
The "new" shop truck.
The 80 is being retired from a daily duties but remaining at ready for hauling the Sprite or boat and it is our
bad road beast now.
i'm thinking of adding an ARB bumper and winch while at my friends shop.
It is a nice ride. Leather and all the gee bobs.
SUCKS gas like crazy.
I tell you once you've owned a Cruiser nothing else is close. We laugh at Rovers and @eeps.
It hurts letting them go to another home.
I do feel your pain.
Ohm...cruiser,cruiser,cruiser...Ohm
David Harrison
1960 Sprite w/ mods
1971 MGB
OP
S

Offline
The shop where I'm getting my Sprite worked on has a beautiful FJ40 for sale. The big problem with an immaculately restored 40 is that you'd be afraid to beat it up the way they were designed to be beaten. If I found one like my Sprite - a solid runner that will never be a show winner, it would be a much bigger temptation.
1969 Austin Healey Sprite Mark IV - "Baby Blue" or "B.B."
1953 Plymouth Cranbrook - "Gertrude"

SaxMan said:
The big problem with an immaculately restored 40 is that you'd be afraid to beat it up the way they were designed to be beaten.
Click to expand...

That was the problem with the red Fj40 I had (briefly) -- it was still original paint with only some very small rust. Original 2F engine with all the smog stuff in place. Just too much of a time capsule to modify or bash about.

Still, if I had space to store it for a while I would have kept it. Even bone stock they're such good fun. I drive our 2013 Jeep Wrangler now and get a little taste of that fun, but just a taste. Ah well, only so much cash to go around.
Drew Frink
'59 RHD Frogeye Sprite :frog: - "Penny" let the rebuild begin!
'66 RHD Morris Minor - "Maggie" alive and driving
'70 RHD MGB - off for an engine rebuild!
'19 Triumph Bonneville T120

I was just passing thru & when I saw the "FJ" post; I knew you were here.

I was just passing thru & when I saw the "FJ" post; I knew you were here.

Just one question: Who`s is it; Yours or Your better half????

What color is the Fiat?