Offline
Let me start by saying that this topic is about the early 150CD carbs on my '67 GT6. These are not the same carbs as used on the later emission controlled cars.

I found that the float in the front carb of my GT6's pair of 150CD carbs was a sinker. Fortunately I had a spare carb to take a working float from. However, I want to keep the spare carb ready and functional so I want a replacement float for it.

The later carbs use a different style float as seen to the left in the JPG below. I have spoken to Joe Curto and he says the early style float is NLA and his suggestion is to seek other used floats as spares. I have tried dry-fitting the later float to my early carbs and it looks like it "might" work if I:

However, with new floats costing $20 I'd like to know if anyone else out there has tried to adapt these later floats to early carbs (any TR4 guys out there?). If you did try what I am suggesting, were you able to still use the stock float height setting as listed in the manuals or did you have to increase or decrease the specified height measurement?

Thanks for any advice you can offer. 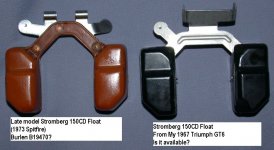 dklawson said:
...anyone else out there has tried to adapt these later floats to early carbs (any TR4 guys out there?)...
Click to expand...

Out here but... TR4s used CD175s which (last time I looked) still had replacement floats available. So not much help.

Offline
Just a thought, you might try drying the float out thoroughly (gentle heat until no more fuel smell) and coating it with model airplane fuel-proof dope (they call it butylrate or something like that) or thinned POR-15. No guarantees, but might work.

Offline
Bugger. I was hoping the TR4s used the same size carbs which might drive demand.

I will give that some thought Randall. If I am counting on the POR sealing the float anyway, I could do what I have done with brass floats and drill a tiny pilot hole before applying a bit of heat. The expanding trapped air pushes the trapped fuel out after which you solder the pin hole closed. The POR should be able to seal the pilot hole just as well on plastic.
Doug L.
'64 Morris Mini Cooper-S 1275
'67 Triumph GT6 Mk1

Offline
Doug, I think Harbor Freight sells a plastic weld kit, Just a plan "B", in case. I also have a couple of early GT6 Carbs and manifold, but that might be a little more than you want to invest in a spare.
Funny how they both are bolted to the intake, no way to use them for anything else, love the way you can adjust them.

Offline
I feel fortunate that last year I bought a complete set of early 150CD carbs on a Mk1 GT6 intake manifold. The things looked like they had been stored underwater when I got them but they cleaned up fairly well. I was certainly glad to find that they had good floats in them when I needed a spare two weeks ago.

Thanks for the additional suggestions. I think I may buy one of the later model floats to try modifying. I certainly have time and can mock up the setup on the bench to determine an equivalent float height adjustment if the modified later floats behave differently than the early ones.
Doug L.
'64 Morris Mini Cooper-S 1275
'67 Triumph GT6 Mk1
Similar threads