Offline
benn painting and prepping while waiting for my block to return. started writing a plan for putting the engine back together. one thing i wonder about is installing the verticle felt seals in the front and rear main bearing blocks. is there a trick to this? seems like something that would be easy to mess up.

Offline
They're not hard, I grease them first (white lithium) so they won't want to bunch up. They will stick out at the pan rail some, but are easily cut with a sharp single-edge razor blade.

Make sure your end bearing caps are free from nicks and burrs, that may impede their progress.

I don't use any sealant, until I am putting on the oil pan w/gasket.

Offline
I watched my engine builder squirt 'Right Stuff' sealant into these holes with a caulking gun. I know another pro builder who recommends doing this; I think the felt 'cigarettes' are all but worthless, and this can be the source of some leaking.
OP

Offline
I wondered about filling the void with some sort of sealant. Right stuff... I have not seen. Have to google that.

Bob_Spidell said:
I watched my engine builder squirt 'Right Stuff' sealant into these holes with a caulking gun. I know another pro builder who recommends doing this; I think the felt 'cigarettes' are all but worthless, and this can be the source of some leaking.
Click to expand...

Is your engine leak-free?

My engine builder used this method, too, and the rear of the engine leaks more than it did before the rebuild. Of course I haven't taken the trans off yet to troubleshoot the leaks. Have to say they're nothing compared to the amount of oil my tired engine burned.
Steve Gerow
Altadena, CA, USA
1959 AH BN6 2-seat roadster / 1974 TR6 Emerald Green
Check out my galleries:
http://www.pbase.com/stevegerow

I didn't observe the sealant come out between the block and the sides, but I watched him physically strain to squeeze the sealant into the hole. He actually barked at me when I tried to talk to him while he was doing it, since he was concentrating on getting the sealant really forced into the holes. My engine hasn't marked its territory since the rebuild, that I've noticed, but I did notice a drop on the bellhousing drain hole when I was removing the gearbox.

I also tried something a little different when bolting the bellhousing to the gearbox: I put fresh copper washers--a Randy F. suggestion--under the bolt heads, with a grade 8 washer on the copper washer, and blue threadlocker on the (clean) bolt threads. There was no leaking around the bolts, which I believe can be a source of leaks out of the bellhousing. Of course, I installed a fresh first motion shaft seal as well.
Last edited: Nov 15, 2017

Offline
Bob - thank you for the update. I may wind up doing this next year. After I've driven it a bit, probably next winter will want to embark on a leak prevention program.
Steve Gerow
Altadena, CA, USA
1959 AH BN6 2-seat roadster / 1974 TR6 Emerald Green
Check out my galleries:
http://www.pbase.com/stevegerow

Offline
Bob
i am just thinking about this in my head... with no block or engine to look at.
but did he run the sealant around the block at the same time and put the oil pan gasket on? thought maybe that would keep from having a dry joint? so in other words, he had set his gasket to the pan and then ran this all at once, mounting the pan? or did he let dry? just curious on timing. i am trying to create a check list to follow for assembly so i don't miss anything and have to go back.

Offline
I didn't see him do it, but I suspect the pan went on right after he sealed the caps; he'd opened one of the caulking gun-sized tubes and probably wanted to do all the sealing before it set up and clogged the nozzle. He used the sealant instead of a pan gasket--don't get me started on how hard it was to pull the pan after I cracked it--and he used the sealant instead of the small, square cross-section cork gaskets that go between bearing caps and the front and rear mounting plates (I saw him forcefully squeeze the sealant into those areas). Tom Monaco told me they use Right Stuff instead of gaskets in most applications now, but be aware the stuff is all but permanent (there are lots of stories on the 'net about people trying to separate parts sealed with that stuff--just search on 'removing right stuff' or similar). 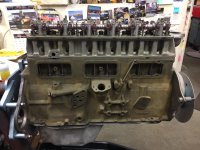 Offline
FWIW - I recently used Right stuff as a gasket between one of my air cleaners and the carb because I'd destroyed the gasket. I was lucky to be able to get them apart by hammering a razor blade in the joint.

IMO it sticks far too hard for most of our uses and should be mostly avoided. There are plenty of other RTVs that will seal yet come apart. I glue my gasket to the pan, then use hylomar between the pan and the block. The gasket should be glued to the moveable part. Weatherstrip adhesive works for this.

Offline
I concur, but I'm OK with using it to seal the bearing cap holes and other gaps (well, I have to be, since it's already done). I'm 64, and expect/hope not to ever have to overhaul my engine again. I used a different silicone sealant/adhesive on the pan, and it's almost as bad as RS. I think if the tube says 'adhesive' on it it's only good in permanent applications.

OTOH, I used Hylomar--the 'good' kind, I think--on my gearbox gaskets and it stuck like glue, too. The label says 'non-hardening,' but I don't believe it now.

Offline
This thread was incredibly helpful for me guys. I just finished this process. I ended up cutting the felt rods into 1/4" lengths and using a 1/4" draft to force each section in. I put a liberal amount of gray sealant (can't remember which one) in the bottom of the hole and between each piece. The result was a really good seal and I feel like I got the felt all the way to the bottom of the hole and sealed all the way up. Once I was finished I added a supplemental modern crank seal since I was already there. I created a video of the crank seal but forgot to do one of the felt seal.