Offline
Besides the Austin-Healey 100s, did any other Big Healeys of that era have fold-down windshields?
Last edited by a moderator: Feb 14, 2019

Offline
Thanks Steve D. You won a bet for me. 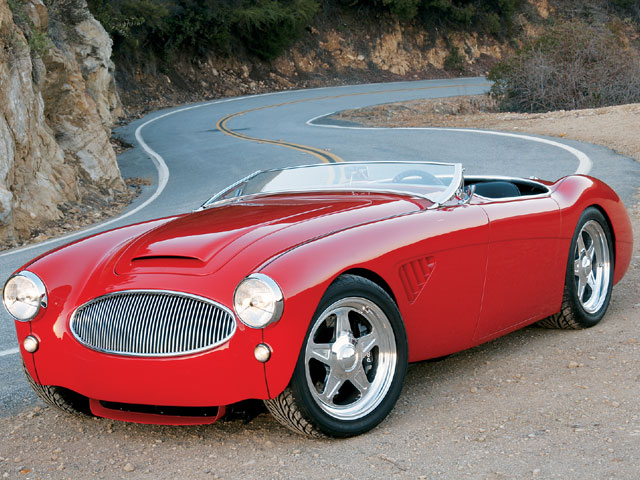 Offline
I think Dave (red57) installed on on his racer. Silverstones had a windshield that could be cranked down into a slot, but they were a bit earlier.
John, BN4

Offline
I really can't think of another automotive feature, on any car I know of, that carries so much weight as a very cool feature yet offers nothing that really justified the cost of the extra parts or the hassle of folding and unfolding (especially the wipers). I suppose little spoilers on cars that never go fast enough to have an effect might qualify but nothing makes me smile more than somone saying to me " ooh, is that the one with the folding windshield?" I wonder how many calls were made to the factory when the '56 six cylinder cars appeared without it.
Jon Robbins
1956 BN-2 (do it all yourself, you'll be glad you did)

Offline
Kinda makes you wonder why Donald insited on it?

I, of course veiw it differently and think it is the single best feature of any car I have ever had.
The T series MGs had folding windshields that were great but they were also serious air scoops and caught a lot of wind as opposed to the 100 that was at least sloped the right way.
OTOH, my buddy with his MG TF always had a place to set his beer :friendly_wink:.

Offline
From a forthcoming book that I am now editing, "Due to complaints that Coker’s innovative folding windscreen assembly was responsible for an unusually high number of damage claims for cracked glass, it was abandoned in favour of traditional fixed pillars, eliminating one of the 100’s most endearing, albeit seldom used features."

That statement is footnoted, and the footnote reads, "This explanation is the one asserted by both Donald and Geoffrey Healey. In reviewing the various documents from the period, however, it appears that reducing production expenses was a more compelling reason for the switch."
Reid Trummel
Editor, HEALEY MARQUE magazine

Offline
Perhaps some of you remember the "special windscreen feet" that we featured in the August 2014 edition of Healey Marque magazine. A resourceful member named Ray Juncal of southern California made some of these to permit lowering the Healey 100 windscreen to a sort-of halfway-down position that gave the car some of the dramatic look of the fully lowered windscreen while still providing enough wind protection to keep you from losing your hat! Here's what they look like installed: 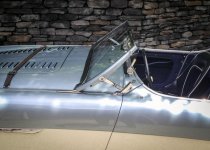 Here's the full text of the blurb that appeared in 2014:

I love innovation, and Ray Juncal of Los Angeles has innovated with the best of them with the special “feet” that he has developed for the Healey 100 windscreen.

Everyone knows how fabulous the 100 looks with its windscreen lowered into “the racing position.” It looks fast just sitting still, and it is always a source of complimentary comments at car shows. However, all of us Healey 100 owners know something else: it’s not really comfortable to drive the car with the windscreen lowered. In fact, with the windscreen down, the air is directed right into your face. Even if you duck, you get it right in the forehead, and unless you’re wearing a face shield, it’s not comfortable and the threat of catching bugs and debris is ever-present. But gosh, the car just looks so good that way, it’s tempting to suffer anyway.

Enter a little thinking “outside the box.” Ray has made some windscreen feet with relocated sockets for receiving the pegs on the lower edge of the windscreen. The sockets are farther to the rear than the stock ones, and the result is that the windscreen is lowered less. In this position it gains much of the dramatic look of the fully lowered position, but it remain high enough to direct the airflow over your head.

Why didn’t someone think of this a long time ago?

Ray advises, “They may require some grinding or shimming to get them to fit. Some of the tests so far have been a bolt-in, but one required shims as the pins on the windshield were spaced too wide apart. I also have not had a set fitted to an early car that had the sand cast fender mounts, but I think they were only on the first couple of hundred cars.”

Offline
I had one of the original Healey 100/4 about fifty years ago. I can attest that the first and only time I attempted to lower it the glass cracked !
Thank goodness the MG is finally gone, replaced by another Corvette

Offline
Wasn’t the feature introduced for the benefit of club racers who would drive to the tracks then lower the windscreen for an aerodynamic benefit. I don’t think it was meant to be for regular road use although it does look fantastic of course.
DerekJ
www.healeysix.net

DerekJ said:
Wasn’t the feature introduced for the benefit of club racers who would drive to the tracks then lower the windscreen for an aerodynamic benefit. I don’t think it was meant to be for regular road use although it does look fantastic of course.
Click to expand...

It wasn't that deliberate. Besides, for racing it was better to remove the windscreen - it is easily removable - to save the weight and to prevent it cracking the glass.

Coker relates that it was added almost as an afterthought at Donald Healey's direction, recalling pre-war sports models that had folding windscreens. The challenge was engineering it to fold with the curved bodywork, unlike the pre-war cars with flatter panels that allowed their flat windscreens to fold forward onto a flat bonnet. To make it work with the curves of the top of the shroud and the fact that the bottom of the windscreen was a curved line to meet that curved shroud, Coker struck upon the idea of the articulation that allowed it to be first raised and then swiveled to "plant" it again in the forward sockets, effectively folding back, not forwards.

Despite the lowered position being retroactively called "the racing position" it was conceived, by DMH, as merely a nod to pre-war sporting car features that he recalled, and Coker found a way to make it work ... sort of.
Reid Trummel
Editor, HEALEY MARQUE magazine

Offline
one of the members on this forum has a very well done folding windscreen on his 3000. perhaps he will enter this conversation. I will ask him to post a couple of pics.
1959 bn6 sbc zz4 with aod transmission....... 1959 bn6 302 ford and tremec 5 speed, rack and pinion steering, narrowed ford rear end, scirroco cooling with dual fans

Offline
I like the look, but you can find yourself eating a dragonfly at speed. I use a deflector with plastic cups to keep the wind out of my face. 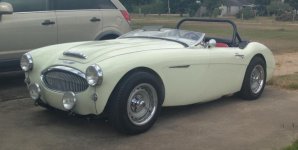 Offline
Just remembered, Coker himself has described the folding windscreen as "a chrome and glass guillotine." It was added as more of a gimmick (conceived only to satisfy Donald Healey's direction to add it in response to his recollection of a feature of pre-war sporting cars) than anything intended for actual use. (If you ever get the opportunity, ask Coker yourself.)

Not that anyone asked, but I run my 100 with AH aeroscreens. They deflect more wind than you might suspect - and not right into your forehead like the folding windscreen - and these are what was offered beginning as early as 1954 by the factory for racing: 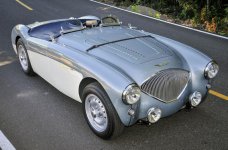 Offline
I had forgotten that you had put those wheels on your car. Very nice, Reid!
1959 AN5 Bugeye - now with my son

Lin said:
I had forgotten that you had put those wheels on your car. Very nice, Reid!
Click to expand...

Thanks. I've seen only one or maybe two other Healeys with these wheels. The cost was breathtaking and I did it "all wrong" by having the Avon ZZ tires mounted in England before the wheels were shipped here (I ended up paying duty on the tires; not the wheels).

Anyway, I think they look smashing and of course they're very easy to clean. They're also strong and don't go out of balance. Here's another favorite pic of the car: