Offline
Hi all,
I've owned my 3000 BT7 for nearly 30 years and I've never cleaned the underside of my car. During the current "lock down" I decided to take a look are the rear suspension and started by removing the rear seat pans. What I found was 30 years of dust, mud and oil forming a dense layer about 1/8" thick covering the diff, lever arm shocks, brake plates etc (Photos attached). Even more surprising I found a fuel filter which I had never noticed in 30 years, as it was masked by the bodywork between the seat pans. As it was a Fram fuel filter I assume that is been there for at least 30 years, predating when I bought the car while living in Houston (I repatriated the car back to the UK in 1993). Of course I've changed the filter now(with out success - I'll post something later). I have also opened up the Armstrong Lever Arm rear shocks and was most surprised to find them full of shock oil - again I'll post separately asking for advice on ho to restore and refill. The chassis frame was in fantastic condition showing the original Healey Blue colour over much of what I could uncover.

Once I've finished cleaning I think I'll paint the axle etc (the diff was silver under all that muck), probably look to replace some of the bushes and apply some underbody wax. 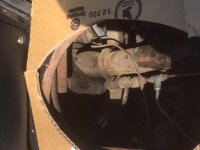 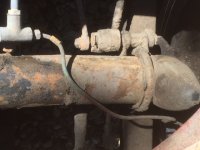 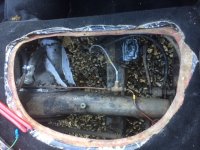 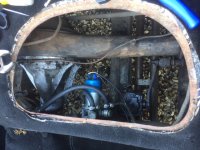