Offline
The motor mounts on my '67 TR4A IRS are detiorated. The rubber is splayed away and the engine is resting on the metal interior of the mount (both sides) Could this metal to metal contact cause a chasis shudder on rough roads? Is this worth fixing and can it be done with the engine in? I just did major front suspension rebuild incl. TR6 bracket upgrade. Having pronounced chasis shudder on rough roads.

Offline
I think you found the reason for your shudder. You can raise the engine with a jack and board under the oil pan to replace the mounts. It will take tilting the engine from one side to the other, kinda tight. If the fronts are that bad it would be worth checking the third mount under the tail of the gearbox. A bad one of those will also make quite a shudder but it's harder to get at. Pretty sure the radiator hoses need to come off.
Richard
65 tr4a

Offline
Here's what I did (twice):

a) Drained the radiator and removed the upper and lower hoses;
b) Raised car on jack stands and removed both front wheels;
c) Slightly loosed the two rear transmission mount nuts under the car;
d) Removed one motor mount nut, and loosened the other
e) Raised engine from sump with block of wood at the far front of the sump where it's strong;
f) Prayed I got the engine high enough to pull out the mounts, one at a time

Yes, I ended up tilting the engine a bit, and I'd recommend trying to keep one engine mount nut partially "on" so you don't end up with an engine in the air that won't drop down on the mounts.

That happened to me, and it was a scare. I gobbed up the mounts and the protruding bolt heads with grease and somehow everything slid into place. Can you imagine somehow getting the engine and inch or so off center, and there it is on your jack?

Anyway, maybe I worried more than needed--since it dropped right back down. Just be careful, and have fun deciding which new mounts to use.

Offline
I replaced my motor mounts as they were sagging and allowing the fan hub to rub on the cross brace. Used new HD mounts from BPNW. I was shocked at the smoothness of the entire car after the replacement. It was like driving a new car.

Yes, very important to do one at a time. If you place the block of wood off center on the pan it will tilt the engine as lifted. Don't tighten the nuts until both new mounts are in place.

This job is much easier if using a 24' extension-ujoint-socket combination, as you can get to the engine nuts from above.

Great time to replace the fan belt if there is any question about age or condition...I have to loosen the mounts and raise the engine an inch or so to replace my belt, and believe it is true for most 4A's with original thick belt.

Offline
The above is all absolutely right. Especially the bit about the fan-belt.

Its a crazy piece of design, but this won't pass over the pulley and past the cross-brace with the engine in its proper place.
So sort it out while doing the mountings.

If you run for log with a poor rear-mounting you can wind up with a crack in the exhause manifold. You will regret this!

Offline
Wow! Great info and detail. Great forum; I'll be putting this at the top of my to do list. Will let all know how it goes. After the front suspension rebuild Fergus is enjoying the California canyon roads. Hope to return the favor.
Shiny side up, Canyon 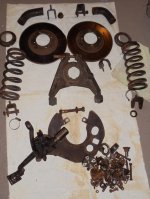 Offline
A little late to the party, but you may want to consider the earlier style (round) monts, as they are a bit taller than the square TR4A mounts. I went this route to get the proper cearance between the fan hub and steering rack. As a side benefit, I can now change a fan belt without a jack.
Ian
1967 TR4A IRS
Similar threads